Concert Review: Mozart’s ‘Symphony No. 40 in G Minor’ by The National Philharmonic Featuring Eric Lu at the Strathmore 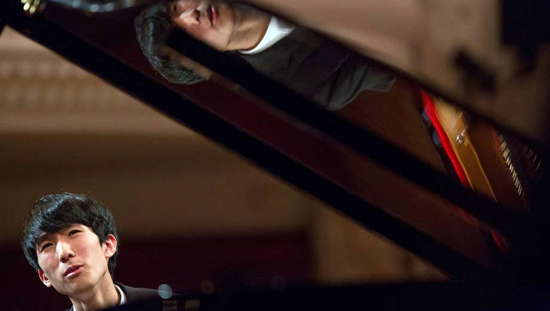 It comes as no surprise that Wolfgang Amadeus Mozart continues to entrance listeners and challenge musicians with his compositions. What one may find baffling, however, is how Mozart constructed a work so perfectly nonsensical that it would purposefully be chosen as the opening piece on April Fools’ Day more than 200 years later.

The timelessness of the musical genius was never more apparent.

When Maestro Piotr Gajewski, conductor of The National Philharmonic, walked on the Marriott Concert Stage at the Strathmore Saturday night, he was quick to provide context about the decision to start with “Ein musikalischer Spass (A Musical Joke), K.522.” He warned the audience that they likely had never heard nor played the piece for several reasons, including, but not limited to, unorthodox scales, unexplored note territory and frequently changing keys.

During the ‘Menuetto and trio’ movement, the horn players took the spotlight, blowing out notes that were essentially nonexistent in Mozart’s time and quite obviously not in tune with the rest of the orchestra. Concertmaster Colin Sorgi’s pizzicato in the ‘Adagio cantabile’ movement drew just as much laughter from the crowd, while the orchestra’s final chords in the ‘Presto’ movement made the punch line of Mozart’s joke painfully clear to the ear. While the piece sounded as if it were haphazardly put together, The National Philharmonic succeeded at bringing its unusual, comedic characteristics to life. In fact, I found it hard at times to distinguish what I really heard from what I saw in the orchestra’s graceful movements.

For the second piece, “Piano Concerto No. 23 in A Major, K. 488,” international prize-winning pianist Eric Lu joined The National Philharmonic. One could immediately sense Lu’s musicality as he calmly counted down his entrance under the center stage spotlight. Of the three movements played, Lu’s interpretation of the ‘Adagio’ movement spoke the most to my soul. His gentle movement across the piano keys brought up a nostalgic feeling, while his slight, reappearing smile reminded me of the joy experienced when a musician connects with the story unfolding through each note he plays. What was even more astounding was Lu’s memory; there wasn’t a page of sheet music to be seen, yet his precise timing, fluidity and rest breaths were perfect. The audience was aware and in awe of the promising, young talent before them and immediately gave Lu a standing ovation when he rose from the piano bench.

After a fifteen-minute intermission, The National Philharmonic walked back onto the stage and Maestro Gajewski dove right into the first measures of ‘Molto allegro’ from “Symphony No. 40 in G minor, K. 550.” Throughout, there was a distinct difference between the timing and placement of crescendos and decrescendos compared to those heard in”Ein musikalischer Spass.” Additionally, the horn section in ‘Menuetto. Allegretto’ sounded so warm and welcoming compared to the stretched out, squeaky sounds in ‘Menuettro and trio.’ As the evening came to an end, everyone stood up to recognize the musical (and comedic genius) of Mozart, the energetic conducting of Maestro Gajweski and the willingness of The National Philharmonic to partake in a musical joke. The timelessness of the musical genius was never more apparent.

Tickets and performance schedules for The Music Center at Strathmore can be found here. For more information on The National Philharmonic’s upcoming concerts, click here. To see where Eric Lu is headed next, click here.