Concert Review: ‘The Doo Wop Project’ with Jack Everly and the BSO SuperPops 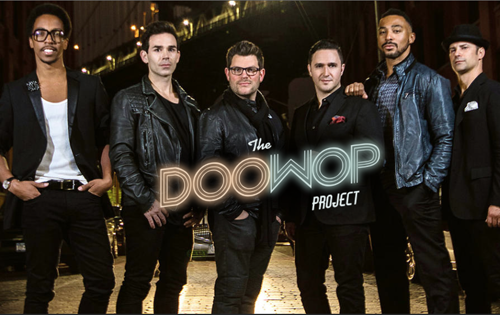 As the story goes, BSO’s SuperPops conductor Jack Everly walked into Feinstein’s/54 Below supper club in New York City while this group of multi-talented Broadway actors was performing. He knows talent when he hears it and arranged to have them join this season’s SuperPops lineup. The Baltimore/DC audiences are very fortunate to have Mr. Everly, with his keen sense of talent, bringing groups like The Doo Wop Project to perform with the BSO.

As a huge fan of the smash musical “Jersey Boys” based on the life of Frankie Valli and the Four Seasons, it was fabulous to see a few of the very talented former alumni that comprise The Doo Wop Project, particularly since the show recently closed after its long, award-winning run on Broadway. The bonus was superb and lush backing by the BSO with Everly at the helm and the uber-talented music director/arranger of the group on piano, Sonny Paladino (also the musical supervisor of the current Broadway hit, Natasha, Pierre and the Great Comet of 1812 with Josh Groban).

The Doo Wop Project…sublime show performed by a supremely talented group of performers.

The lineup for this group changes slightly as the performers are available (currently founding member Dominic Nolfi is on Broadway in The Bronx Tale) but there is always a guarantee of remarkable talent no matter the iteration. It’s all in the family, the Jersey Boys family, with one stellar exception. The focus is to keep this amazing music with its glorious harmonies alive. The group covers doo whop’s heyday but also experiments with incorporating that style of music into contemporary numbers to reach a younger audience – they “Doo wop-ify” the songs. And it succeeds brilliantly.

Throughout the show, each of the singers tells his unique story – and the influence of this music on their lives – with great humor and warmth. The performers shared equally in the spotlight and supported each other with tight harmonies. They showed the audience why they all landed on Broadway – huge vocal talent and some slick dance moves, whether they were choreographed or free form.

Straight from his run on Broadway in “An American in Paris” and a “Jersey Boys” alum, Matthew Scott has a wonderful voice that blends so well with the other members. Charl Brown is also a “Jersey Boys” alum and a 2013 Tony nominee for Best Featured Actor in a Musical for his incredible performance as Smokey Robinson in the Broadway hit “Motown the Musical” and reprised his role in the London production. Russell Fischer played Joe Pesci in the Broadway Company of “Jersey Boys” after landing the role on his 22nd birthday. Also as an understudy for Frankie Valli, he was called upon to play both roles during the same performance! Dominic Scaglione Jr. was a young, inexperienced performer straight from Frankie Valli’s hometown in New Jersey. He worked very hard on his own (the help of a doo-wop loving father) and won over Bob Gaudio, the original member and composer of The Four Seasons. Scaglione then began his journey from the Vegas Company to the Chicago Company and then onto Broadway in the role of Frankie Valli. Dwayne Cooper is another former “Motown” cast member who played Temptation Melvin Franklin (with the same appealing smile). Cooper is agile and funny with a powerful bass voice and dance moves. He is soon to be seen in the Broadway revival of “Smokey Joe’s Café” with Sonny Paladino as the music director/conductor.

The first half of the show consisted of the genesis of doo-wop with such classic as “I Only Have Eyes for You,” “Remember Then,” a medley of “Morse Code of Love”/“Little Bitty Pretty One,” “That’s My Desire” and “Oh Rosemarie.” They then slipped into a surprise doo-wop version of a Michael Jackson’s, “The Way You Make Me Feel.” Charl Brown showed why he was a Tony Nominee as Smokey Robinson with a medley of Miracles classics – “Ooh Baby Baby” and “Tracks of My Tears,” followed by “Tears of a Clown.” They ended the first act with some more doo-wop hits – “I’m Yours” and “Come and Go With Me.”

The second act opened by highlighting  a few of the Frankie Valli songs featured in “Jersey Boys.” “The Big Three” were the three chart-topping hits the Four Seasons garnered, in succession, at the beginning of their career – a medley of “Sherry/Big Girls Don’t Cry” followed by “Walk Like Man.” The only song that Valli recorded that was a Frank Sinatra standard was the Cole Porter hit, “I’ve Got You Under My Skin.” They reimagined the song as if the two sang it as a duet with Scott as Sinatra and Fischer as Valli. Scaglione did the signature show-stopping song he sang so many times in the role of Valli – “I Can’t Take My Eyes Off of You.”

After another medley of classic hits, the audience was treated to a doo-wop spin of a pair of Maroon 5 songs “Sunday Morning”/“This Love.” They segued into another Broadway gem, “Man of La Mancha’s” “The Impossible Dream.” The group ended the show with a medley of songs about what else – girls and cars. “Gloria” and then “Speedo” gave Cooper a big chance to shine as he jumped into the audience running up and down the aisles, high-fiving the guys and kissing the ladies. Following a standing ovation, the group finished with an encore of two songs by the popular British singers, Adele (“Rolling in the Deep”) and Sam Smith (“Stay with Me”) – all with that twist of doo-wop magic.

The joy of the group’s performance was infectious and it was clear the guys were having as much fun as the audience.  “The Doo Wop Project” garnered enthusiastic standing ovations and a very long line to sign CDs and take photos after the show. Run to the BSO this weekend and catch this sublime show performed by a supremely talented group of performers. Let us hope Mr. Everly brings them back next season!