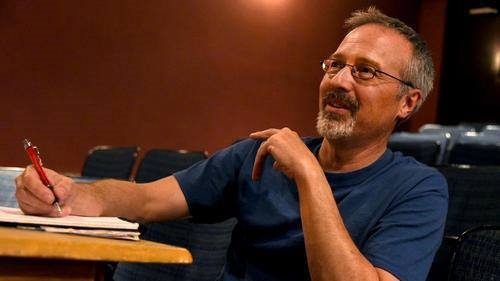 A Personal Memorial by Mark Scharf

If you’re lucky, you will be blessed with the gift of someone in your life like Anthony Hinkle. When I got the call letting me know he was gone I refused to accept it – I could not and did not want to make any sense of it. How could someone that vital, that engaged, that positive be taken so suddenly?

I think of our theatre community as a quilt of different fabrics, colors, people, places, and works created; each square different from and yet connected to each other. For me, the unexpected loss of Anthony Hinkle is a violent tear in that fabric; one that’s created a gap in what we do and who we are. Anthony understood that no one is indispensable – but, for me, he comes close. I can’t possibly relate all the ways this singular man made a difference in the lives of so many.

I can tell you about the Anthony I worked with and acted for; the man I call my friend. Anthony was a founding member of The Collaborative Theatre and also Vice President of Fells Point Corner Theatre. His resume is an outstanding record of accomplishment as a director, producer, designer and stage manager. He knew the pieces and how they should all fit together – and he could do that fulfilling his own, singular vision.

As a fellow board member, I saw how he translated his love for the theatre into plans and action. He would do what needed to be done: vacuum and clean, hang lights, paint, crawl on his back under the seats, stock concessions, spend hours and hours re-organizing props and costumes and building supplies, run the Box Office and act as Front of House to engage all who came to our theatre. It was Anthony and his husband Steven who drove down to the theatre at 5:00 a.m. because the fire alarm had gone off.

Anthony had vision – he could identify the root of a problem and almost instinctively see solutions. He’d do what was needed to understand a situation so that he could make informed decisions regardless of whether the problem was logistical, artistic, or financial. He wanted to make things right.  He was unfailingly optimistic and positive. It’s too easy to embrace the dark, negative side of things and Anthony never gave in to that temptation.

This is all not to say he was a Saint and he’d be the first to disabuse anyone of that notion. He had the same doubts and frustrations we all struggle with. Anthony expected much because he gave so much. He could get frustrated and vent like anyone else – gorgeous, funny, insightful venting that sometimes succinctly summed up a situation in two, well-chosen words — but nothing was ever malicious. He never intended any of his words to wound.

One thing he could not tolerate was deceit—trust is as necessary as air for us to do what we do and Anthony reacted to deceit as a fundamental threat to all we were trying to accomplish.

He understood human fallibility and fragility better than most. He knew that the accumulation of small ignored, seemingly inconsequential details could help bring down the whole enterprise. For example, if you want to know why he was so zealous about turning out lights at the theatre when a space was not in use all you need to do is look at the monthly BGE bill.

He was instrumental in turning the ship around – stopping the leaks with one hand while keeping the other hand on the wheel slowly changing our direction to one of possibility and a future. He had more than hope – he had a plan of action and would not be dissuaded by what would surely overwhelm others.

When he cast me in his production of THE ELEPHANT MAN, I immediately knew this was an opportunity to work at a new level. He made me feel safe as an actor which allowed me to take chances I would never have taken; chances he encouraged me to take. I was inspired. There was a feeling and sense of purpose born from his attention to details large and small and the care he took with every actor and every moment onstage and off needed to bring that play to life. He transformed a cast and crew into an ensemble.

Anthony was always there for me personally as he was for so many. He showed up to the readings and the performances of my work and he always had something of value to say.

Anthony chose to make his home both artistically and personally in Baltimore and he cared about our community. He always went the extra mile because it was the right thing to do and he cared enough to do it. He was passionate, supportive, intelligent, funny and insightful – a comfort to his friends.

I think his legacy is perhaps his greatest gift: he created space for people to connect, create, teach, and heal — he made it possible for others to make things happen. He had your back. I have not had a better friend.

I miss him — and I’m sure I always will.

Mark Scharf is a Baltimore playwright, actor, and teacher currently serving as Secretary on the Fells Point Corner Theatre’s Board of Directors