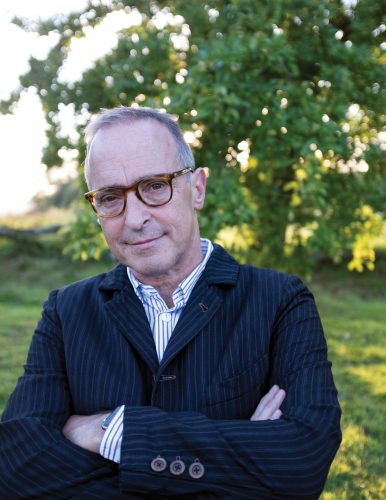 “My family isn’t really all that different from anyone else’s. Well, maybe they’re a bit more entertaining.” David Sedaris’ assertion is quite right – as he delighted, transfixed and, most definitely, entertained a sold-out audience at the Strathmore Music Center with “An Evening with David Sedaris.”

For readers not familiar with Sedaris’ work, he is a prolific writer, mostly of satire and non-fiction. Many of his stories revolve around his personal life and family, though he admits that he does tend to embellish. A frequent character in his stories is his also-famous sister, Amy Sedaris, who is an actress best known for her quirky Comedy Central sitcom “Strangers with Candy” and her role as Deb in the new holiday classic “Elf.” He first gained notoriety when his story, “The Santa-Land Diaries” was chosen to be broadcast by NPR in 1992; it was a story about his time as an elf at Macy’s during one holiday season. It was a huge success and led to a string of New York Times bestselling books, including “Me Talk Pretty One Day,” “When You Are Engulfed in Flames” and “Naked.”

…as he delighted, transfixed and, most definitely, entertained a sold-out audience at the Strathmore Music Center…

As an unapologetic liberal and gay man currently living abroad, he, of course, commented upon the election of the United States’ most recent president. He said that, like many, at first he paid Trump no mind, thinking that he could name the Hamburgler as his running mate – that’s how insane it seemed that he could actually win. However, when the unthinkable did happen, Sedaris found solace in the fact that as terrible as he felt, somewhere out in the world Cher was feeling the exact same feelings of desolation and confusion. This gave him comfort.

His next story came from an upcoming book and featured one of his favorite topics – his family. This story’s main setting was the beach house he shares with his family in Emerald Isle, North Carolina, very comedically named the “Sea Section.” Like many stories that center around his family, it is at turns comedic to the point that you laugh out loud but shares the tinge of bittersweet melancholy found in many of these stories. In his early stories, most of this soft sadness can be traced back to the loss of his mother to cancer. In this story, that is compounded by the aging of his father and Sedaris’ reverie about their often distant relationship. However, he does remember that he and his father share a unique bond over jazz music. Just when the audience is fully gripped by “the feels,” he then shares how, as a child, he would flush the cardboard toilet paper roll just to enrage his old man. He then paid for it when, after his father finding out he was the culprit, he made him reach into the clogged pipe and fish out the roll with his bare hands, throwing the audience into laughter once again.

He also read a few excerpts from his upcoming book, “Theft by Finding,” which is a curated collection of diary entries that he has compiled over decades. Like much of his work, the entries ranged from serious to comedic, poignant to ridiculous. I won’t spoil any of the entries here; I would highly recommend checking out the book, which comes out on May 30th.

Finally, as is his custom, he ended the talk by taking questions from the audience. He discussed how excited he was to be a guest judge on “RuPaul’s Drag Race,” and his definition of what makes a star. The most interesting result of an audience question referenced a story from one of his previous books. He had a growth on his abdomen that was benign, and he had wanted to feed it to a turtle that he had seen near the Sea Section who had a pretty massive growth of its own. The audience member asked if he ever made good on his desire. Sedaris said that he did, in fact, have someone remove his growth, (not a medical professional, as he was told he wouldn’t be permitted to keep the excised growth if done professionally) and gave it to his sister Amy to feed to the turtle. Sadly, the tumor turtle had died, so it was just a random turtle that ate his growth.

Strathmore Music Center was an excellent venue for Sedaris, as he could easily see and interact with the audience. It was also spacious enough to accommodate his significant number of fans while providing both an excellent view and acoustics – there really is not a bad seat in the house. Sedaris also very graciously signed books both before and after the show, always happy to meet and talk to the people who enjoy the writing in which he puts so much of himself. This reviewer went into “An Evening with David Sedaris,” not knowing what he would talk about, but knowing that I would be delighted with his acerbic wit. I was not disappointed. His work has always shown that the best thing to do when life challenges you is to sit back, laugh, and wonder if Cher is feeling the same thing in that moment.