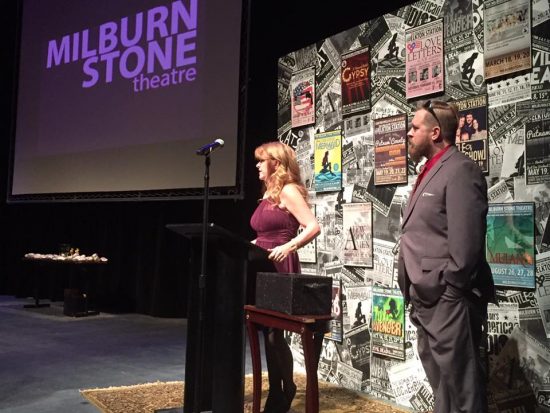 The “About Us” section on Milburn Stone Theatre’s website has a photo of an empty stage and just the name “Artistic Director” where Bambi Johnson’s name and photo once appeared.

Her untimely dismissal from Cecil College’s Milburn Stone Theatre on Wednesday, April 5th has caused shock, frustration, and sadness among her supporters in the community.  What is more, with a little less than two weeks remaining until their production of “Mary Poppins” opens, the cast and production team at MST is struggling with the sudden loss of their leader, choreographer, and friend.

Interestingly, the day before the dismissal was announced, the cast received show posters with Bambi Johnson’s name omitted.  This would imply that the decision to dismiss Johnson was made some time in advance in order to give time for the printers.

As you can imagine, the dismissal has caused some backlash. William Price III, MST’s resident lighting designer, resigned to stand in solidarity to Bambi’s dismissal.

So why is Bambi Johnson no longer employed by the college? Cecil College could not explain details about Johnson’s dismissal citing legal reasons related to personnel decisions.  Johnson is also prohibited from speaking at this time for legal reasons, except to say that she will likely seek to be reinstated as Artistic Director.

“Bambi was the heart and face of Milburn Stone,” Mark Briner, the director of “Mary Poppins” said in a phone interview with MD Theatre Guide.  “She has an enormous following.  She brings a wealth of resources; probably more than anyone in the theatrical circle in the area.  She is also very good at building rapport with the performers.  Artistically, she is one of the most visionary artists that I’ve ever worked with.  People want to help her and she wants to help them.”

Despite the drama, many are still working hard in order to bring a quality production of “Mary Poppins” to the Milburn Stone Theatre which runs April 21 through April 30.

Though they say they can’t possibly fill Bambi’s shoes, previously-chosen dance captains are helping to make sure the cast performs difficult numbers such as “Step In Time” to the best of their ability.  Other volunteers are also working hard in assisting with props, costumes, sets, and everything else involved in “Mary Poppins,” a difficult show to produce under the best of circumstances.

Mark Briner says “We have an amazing cast.  Bambi’s artistic work is at the heart of the show.”

The show must go on, but some cast and crew members worry that the high quality that Milburn Stone is known for will be quite challenging to obtain without Bambi Johnson at the helm.

LEAVE COMMENTS BELOW in the “LEAVE A REPLY” section.