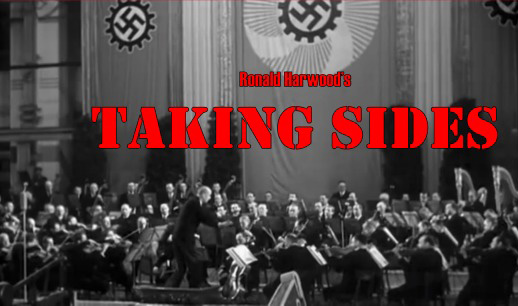 “Taking Sides” at Port City Playhouse: What we can learn from history…

“Taking Sides” by Ronald Harwood is a stark look at post-war process and what is really meant by getting at the truth of what happened, why, who knew and when. Director Mary Ayala-Bush has crafted a thought provoking scenario of whether Wilhelm Furtwangler, the celebrated conductor of the Berlin Philharmonic Orchestra was a Nazi sympathizer, supporter or just naïve enough to believe that music and art can be kept separate from politics.

First time actor, David Roberts, does an exceptional job as Furtwangler’s interrogator, Major Steve Arnold. It would be easy to play this role completely over the top and that was the complaint with the original Broadway production. But Roberts, through great coaching by Director Ayala-Bush, builds the emotions into a stunning climax. Paul Donahoe’s Furtwangler is a bucket of conflicting attitudes, at times arrogant, sincere and dismissive.

Supporting these two protagonists are two witnesses, Tamara Sachs (Lorraine Bouchard) and Helmuth Rode (Paul Brewster), who portray the confusion and conflict of trying to reconcile what really happened and their role in it. Likewise, Emmi Straube, Major Arnold’s secretary, played by Lauren Devoll and Lieutenant David Wills, the intelligence officer played by Brendan Chaney, hold much sympathy for Furtwangler that Arnold simply cannot fathom.

The cast works beautifully together to demonstrate the pain and horror that accompany the recovery of a war torn country.

Port City’s new home at Sleepy Hollow United Methodist Church is not yet complete, so the staging of this play in the church sanctuary is both disturbing and comforting. The small stage area makes the most of limited lighting options, minimal furnishings but vibrates with the lush sounds of the actual Berlin Philharmonic under Furtwangler’s direction, thanks to sound designer Alan Wray. Director Ayala-Bush has faithfully created costumes from the period and the opening video sequence designed by Becky Patton sets the stage for the drama to come.

Give this show a shot – it is worth considering whose side, whose truth is real – the victims, the vanquished or the victors?

“Taking Sides” runs two and half hours with a fifteen minute intermission and continues through May 6. Tickets are available at www.portcityplayhouse.org or at the door.