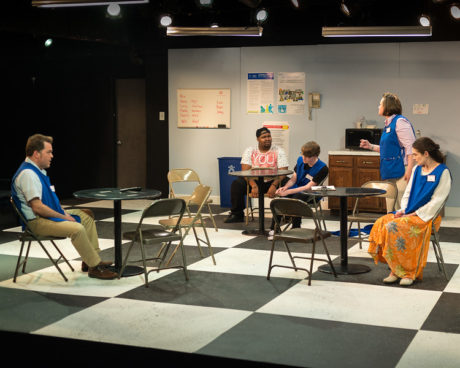 Cast of “A Bright New Boise.” Photo by Harvey Levine.

If you are looking for an intriguing theatre piece that leaves you pondering its meaning long after the play is over, look no further than “A Bright New Boise,” now playing at Silver Spring Stage and directed by Matt Ripa. Written by Sam Hunter, winner of the 2011 Obie Award, “A Bright New Boise” draws us into the lives of a few employees at a Midwest Hobby Lobby and if that particular store calls to mind an infamous Supreme Court case, well, that’s the intention.

… deeply compelling with brilliant performances from the small cast.

The play focuses on Will (Brendan Murray), a middle-aged evangelical Christian fundamentalist whose former church just may have been a cult. Ultimately the choice of going so far as to name it a “cult” is left to the audience’s judgment, but as Will’s defensive shell unravels throughout the course of the play, I feel that the audience ends up feeling unified in our strong and sometimes shifting emotions towards him.

Murray delivers just the right nuances as Will. At times he is broken and lost, at times searching for meaning. In every scene, Murray’s performance seemed to come from the heart which is what made the final climax all the more chilling.

When the play begins, Will’s church has just been permanently shuttered due to a scandal whose details are not immediately revealed to us. He has moved to Boise looking for a new start – but there’s a little more to that story, too. The play begins on the first day of his new job at Hobby Lobby, where Andrea Spitz as store manager Pauline is a powerful force to be reckoned with. She is foul-mouthed and funny, although the comedy comes from Spitz’s straight delivery of a frustrated and down-to-earth manager just trying to keep profits up and the registers moving.

I loved Spitz’s performance and she truly stole every scene she was in while providing much needed laughs in a play that deals with heavy thematic material. Her hand to head gestures when the store chaos got to be too much for her were hilarious as were her deep breaths when she made a rare effort to remain calm instead of hurling curses at different employees, although the screaming profanity was also quite funny and made the moments when she tried to keep a lid on it even more delightful to witness.

It turns out that Will has pursued employment at this particular Boise Hobby Lobby in order to reconnect with the son he let be given up for adoption as a baby. Ben Miller delivers an intense performance as Alex, the brooding teenager who has had a difficult life marked by alcoholic adoptive parents and recurring panic attacks. Miller is a master of scornful teenage sarcasm and at times he drips with contempt for Will. In other moments, he delivers some heart-wrenching vulnerability and watching him go through panic attacks on stage provoked deep empathy from me. At one point in the piece, Miller delivers a spoken-word performance that is truly amazing – he got a well-deserved raucous applause from the audience at its conclusion! “A Bright New Boise” marks Miller’s first community theatre performance apart from acting in his high school plays and I am quite sure that he will soon become a pillar of the local theatre scene with his immense talent.

Alex has a protective older (adopted) brother in Leroy, played by Shaquille Stewart. Lest Pauline have a monopoly on the profanity, Leroy throws quite a few curses out there himself. His character is an artist who specializes in provocative t-shirts specifically designed to upset his customers. Stewart does a great job with a character that demands a wide range of emotion, from tender protectiveness towards Alex (especially moving in the panic attack scene) to open hostility towards Will and a playfully contentious employee-employer relationship with Pauline.

Leroy provides an interesting foil to Will in that they both practice extremism in their beliefs. While Will ultimately clings to his fundamentalist beliefs even while rejecting the criminal actions of his pastor, Leroy also engages in an equally rigid belief system that he demands that Will completely conform to in order to become “a good father.” Even Pauline practices a form of extremism in her utter insistence that her own life’s meaning is in fact life’s only meaning.

Ultimately the most balanced character in the play ends up being the one who at first appears to be the most fragile – Anna, played with brilliance by Maura Suilebhan. Suilebhan’s nervous facial expressions and body language were a highlight of the show. I was surprised that the character who I would have expected to be the weakest is revealed over the course of the play to be the one with the most inner strength as she is able to live peacefully with herself and others by accepting that everyone has the right to their own viewpoint and that we don’t all need to agree on semantics or choices in order to live in harmony.

I enjoyed the set by Scenic Designer Dean Leong which perfectly captured the look and feel of a big box store. From the cheap folding table and chairs to the microwave, employee safety posters and forms, and black and white tiled floor, I felt like a minimum-wage employee myself who was a fly on the wall to the play’s action.

Costume Designer Julie Cray Leong also did a fantastic job. The employees wore matching blue work smocks when on duty and I appreciated the individualization of each character’s personal clothing. Pauline’s hair perfectly said middle-aged no-nonsense manager, with a teased poof of hair held back by a barrette, while Anna’s bun transitioning to a French braid complemented her more waifish and receding vibe, especially when paired with flowy skirts and tops. Will exuded stereotypical modern evangelical with his khaki pants and short-sleeved button up shirt while Alex’s look was emo and Leroy looked the part of an artist.

The lighting design by Katherine Offutt added to the dark atmosphere of the play from the spooky dim breakroom scenes to the eerie parking lot and the music by Sound Designer Robert Pike played nostalgic 90’s Christian pop rock which really brought to mind the Hobby Lobby Supreme Court case and reinforced where we were in time and space.

While “A Bright New Boise” is not a happy-go-lucky type play with a fluffy fairy tale ending, it is a powerful though dark story that is deeply compelling with brilliant performances from the small cast. If you lean towards thought-provoking and slightly existential theatre, I highly recommend “A Bright New Boise” now playing at Silver Spring Stage.