Theatre Review: ‘A Human Being Died That Night’ at Mosaic Theater Company 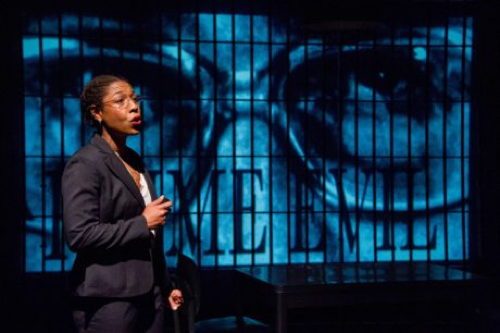 The second show in Mosaic Theater Company’s “South Africa: Then and Now” repertory is Nicholas Wright’s “A Human Being Died That Night” based on the book by Pumla Gobodo-Madikizela. It follows Pumla as she interviews Eugene de Kock, nicknamed Prime Evil for the atrocities he was associated with during apartheid. Forgiveness, reconciliation, and hope are some of the themes of this compelling and timely play.

It is the struggle that Pumla, played by Erica Chamblee, faces is recognizing the humanness of a man who had committed horrible human rights violations. Chamblee is a dynamic actor who carried herself with a vulnerable strength that made her quite relatable. She is gently powerful and that makes her an engaging actor to watch.

Forgiveness, reconciliation, and hope are some of the themes of this compelling and timely play.

Her partner on the stage was Chris Genebach. Genebach’s portrayal of Eugene de Kock was so naturally human. His hopes, fears, and frustrations were the same as those of anybody. This perpetuated how thin the line is between good and evil. Genebach gave de Kock levels and a vibrant passion.

Their relationship was beautiful. These two people were able to use these interviews to process what had happened during apartheid. Pumla struggles to stay unattached while Eugene is concerned that he had killed somebody close to her. Forgiveness is not easy and does not mean that anybody forgets.

Director Logan Vaughn created some beautiful pictures on the stage using these two actors. The simple movements and positioning were compelling and revealed the growing relationship between these two individuals.

Debra Booth designed a lovely set which consisted of a large three-walled box that looked like a prison cell. The tall bars were eery and the shadows they produced, thanks to Michael Giannitti’s lighting design, were striking. Giannitti’s design had excellent subtlety, particularly in the moments when Pumla was addressing the audience as a professor does a class in contrast to when she was speaking with Eugene. The use of projections, designed by Patrick Lord, was a great tool for showing Pumla’s status as a professor and also providing some visual difference on the stage.

Sometimes we have to be reminded that even those that we find the most evil, are more like us than they are different. Whether it is South Africa in the midst of apartheid or America today, this still rings true.

“A Human Being Died That Night” is a wonderful companion to “Blood Knot.” Mosaic is actively stirring up dialogue and finding global issues that have a personal connection. Both shows in this repertory are beautiful and significant pieces of theatre for us today.

“A Human Being Died That Night” runs through April 30 at Atlas Performing Arts Center. For more information click here.