Theatre Review: ‘A Raisin in the Sun’ at Arena Stage 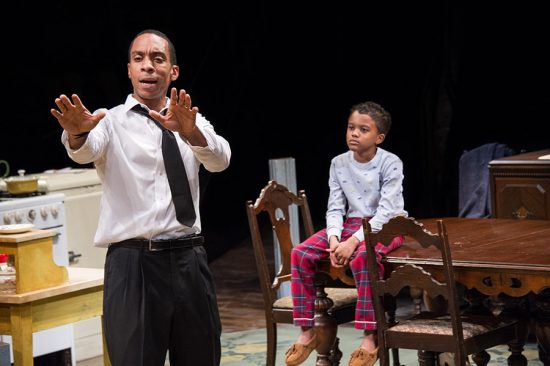 Will Cobbs as Walter Lee Younger and Jeremiah Hasty as Travis Younger in A Raisin in the Sun at Arena Stage at the Mead Center for American Theater, running March 31-May 7, 2017. Photo by C. Stanley Photography.

Arena Stage’s production of “A Raisin in the Sun,” directed by Tazewell Thompson brings new life to an old classic. Set in the 1950s, “A Raisin in the Sun” explores themes of hope, freedom and the American dream, themes that are still relevant to this day.

There’s no question why Lorraine Hansberry’s work is considered a masterpiece. She puts the spotlight on the African-American family life and portrays their struggles in an honest and realistic way.

The entire cast delivers some of the greatest acting I have witnessed in the DC Metro area, and this is where “A Raisin in the Sun” truly shines.

“A Raisin in the Sun” is the story of the Younger family, who live on the south side of Chicago in a tiny apartment. The family, led by matriarch Lena (Lizan Mitchell), includes her son Walter Lee (Will Cobbs), his wife Ruth (Dawn Ursula), their son Travis (Jeremiah Hasty) and Walter’s sister Benethea (Joy Jones).

After Lena’s husband and Walter Lee’s and Beneatha’s father dies, the family patiently waits for the insurance check to come in and dreams about how the money will change each of their lives.

The play opens with Ruth bustling around the family’s apartment in the early hours of the morning. Right from the start and with such subtle movements, Ursula portrays Ruth’s exhaustion and sorrow. As the play goes on, this sorrow underlays much of Ursula’s performance, making Ruth a complicated and interesting character.

Ursula is not alone in her powerful and balanced acting. The entire cast delivers some of the greatest acting I have witnessed in the DC Metro area, and this is where “A Raisin in the Sun” truly shines. Cobbs shows Walter’s manic side effectively, without veering too far in that direction. Jones makes Benethea’s arrogance and know-it-all quality clear but still makes her likable.

But the true standout of the show was Mitchell as Lena. In the final scene, as she looks at the carpet in the apartment she has lived in for years and becomes emotional, that look is all we need to know what she is feeling. Mitchell makes Lena’s pain so powerful and apparent through such subtle acting.

Arena Stage offers a unique theatre experience with a 360-degree stage, with the audience seated around all sides. This presents a challenge for the actors to ensure no side of the audience feels neglected. While the actors were not always facing my direction when they were performing, it never felt like I was missing out or that my view was blocked. The staging was so carefully done and turned a difficult stage into an interesting one.

The stage was transformed into the Younger’s tiny apartment, mainly the living room area and the kitchen. There were so many little touches that made the set feel homey and just like a family’s old apartment. With running water and a stove to actually cook eggs, the set was functional and the actors didn’t have to play at living in this apartment. Instead, that’s what they actually did.

The furniture used looked old-fashioned and worn out, just like how I would imagine the Youngers’ furniture to be. Even the carpet, which Lena often fixates, looks faded and shabby.

“A Raisin in the Sun” is an important piece of theatre that still resonates today. Though it deals with an African-American family in the 1950s, their struggles, hopes and dreams are still relatable to audiences today.

In a world where racial prejudice and inequality still exists, the Youngers remind us that we all dream, we all hope and we all wish for a better life.

“A Raisin in the Sun” plays at Arena Stage in Washington, DC through May 7, 2017. For more information, click here.