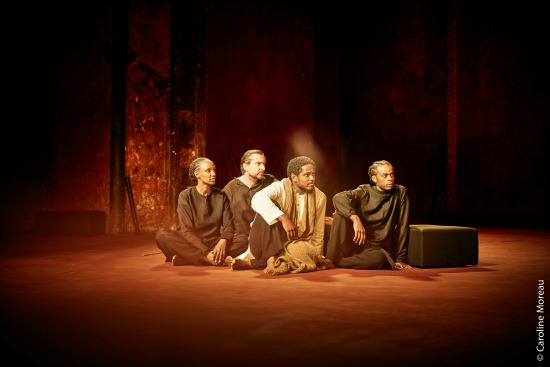 Peter Brook has been called “our greatest living theatre director”, so his inclusion in The Kennedy Center’s “Spotlight on Directors” series is a straightforward one. Nonetheless, it is not declamation, nor spectacle that announces his extraordinary capacities in “Battlefields”,  co-adapted and co-directed by long term collaborator Marie-Hélène Estienne. It is, instead, a keen attention to detail, a conviction, and a deftly calculated sense of the dramatic. Brook first staged “Mahabharata” by Jean-Claude Carrière, his adaptation of the epic Sanskrit poem “The Mahābhārata”, in 1985. Its impact was a revelation, if not a revolution, changing the face of theatre in the west and going on to tour the world for 4 years. In “Battlefield”, based on the same play, the aftermath of the warring Kaurava and Pāṇḍava princes provides a starting point for various meditations on life and death, the physical and the metaphysical.

An artist adamantly disinterested in looking back, it might seem unusual that Brook has decided to return 30 some years later. The subject matter, however, seems to demand it, particularly in the face of new world conflicts and new destructions. The story hinges on the inevitably cyclic nature of war and peace in human life, of destruction and creation. One of the few survivors of the war and now heir to the throne, Yudhishthira (Jared McNeill), tells his mother (Carole Karemera) early on in the piece that “this victory is a defeat”, acknowledging the senseless violence and the innumerable bodies scattered across the battlefield.  He resolves to leave for the forest “seeking neither death nor life”, before being convinced that his duty is to remain. Interwoven through the narrative are numerous smaller parables from “The Mahābhārata” superbly brought to life by the entire ensemble.

…you are in the hands of extraordinary theatre-makers…

Where the original Mahabharata was 9 hours long (11 hours with intervals), “Battlefield” is a little over an hour, an intimate and unpretentious staging, the antithesis of 30 years ago, superficially, but living in that same spirit. “Battlefield” is born in and out of the silence that comes after a great destruction and Brook, now 91, has lost none of his theatrical impulses and instincts, in many ways moving ever closer to his ideal of the theatre as an empty space.

There is little in the staging to distract from the direct performance of the story, a bare stage adorned only with a few bamboo sticks, the theatre’s back wall and side of stage clearly visible. Some large, primary coloured scarves serve as ornament, a splash of colour eventually dispensed with and also used to create whatever is needed. This Spartan sensibility focusses our attention on the words and the stories. Philippe Vialatte’s lighting design is similarly direct and compelling, didactic without ever becoming heavy-handed. Drummer Toshi Tsuchitori creates the music anew each night, which is as much a part of the fabric of the work as the characters and set. Tsuchitori has been working with Brook for 40 years, and was a central figure in “Mahabharata”. His contribution to “Battlefield” is evocative and beautifully defines the mode of performance.

Of course, the central problem in telling a story which is about a never-ending cycle of creation and destruction – war and peace – is how to find an ending. “Battlefield’s” ending is a highlight of the evening and simply stunning. It displays the kind of assurance and elegance that reminds you you are in the hands of extraordinary theatre-makers who know precisely when to hold a moment because it is more arresting and compelling than attempting to push forward.

In the final moments of “Battlefield”, Tsuchitori is suddenly drawn physically further into the space, his rhythm focusing our attention before fading to silence. The houselights slowly fade up, gently waking us from the world of the play into our own. The point being made is philosophical, but its expression is corporeal. It speaks of the existential moment where words – and indeed logic – fail us. The ‘nowness’ of a drum strike removes past and future until it must also remove the present.

“Battlefield” cultivates an unexpected intimacy from an epic story. It is as arresting as it is sometimes elusive. Just as it is put in the play “death waits for no man” and the play seems to press on with its message, even 30 years on, giving time to nothing and no one.

“Battlefield” plays until April 2 at The John F.Kennedy Center for the Performing Arts, part of the “Spotlight on Directors” series. Tickets can be purchased online here.