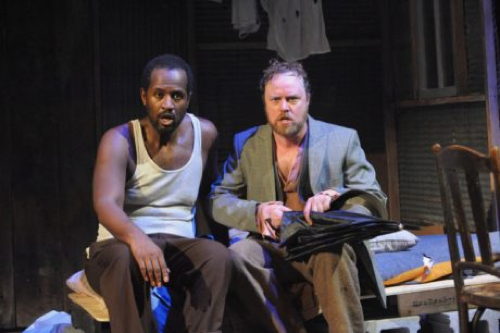 Athol Fugard’s masterpiece “Blood Knot” plays at Mosaic Theater through April 30 as part of their “South Africa: Then and Now” repertory. The second play, “A Human Being Died That Night,” opens next week.

Individually, these men are incredible. Put them together and the result is electric.

Fugard’s play premiered in 1961 in Johannesburg during the atrocities of apartheid. It follows two brothers, the dark-skinned Zachariah, and his light-skinned brother Morris. Fugard creates a beautiful world of allegory. The two men live in their vivid imagination and still play games like children. The year the play is set is never disclosed and apartheid is never specifically mentioned. Founding Artistic Director of Studio Theatre, Joy Zinoman, directs the play with such a beautifully gritty style that really shows the struggle between fraternity and society.

Zachariah misses going out and is feeling lonely with only Morris around. Morris is determined that they are going to work hard and save enough money to buy a small farm one day. Zachariah has taken to writing a pen pal but soon they discover that he has been writing to a white woman whose brother happens to be a police officer. Tension between the two brothers runs high and their blood knot faces unraveling.

Zachariah is expertly played by Nathan Hinton. Hinton is a powerful and charming actor who breathes so much life into the character, one moment having the energy and joy of a young boy, the next being beaten down by long days of work in an oppressive society. He is counterpart to Morris who is played by Tom Story. Their bond is strong on stage. Story revealed great depth in Morris, who wrestles with who he is and how he looks. Story finds the heart of Morris, who wants to do better for both of them, and who lives with guilt over something he had no control over. Individually, these men are incredible. Put them together and the result is electric.

Anika Harden appears as the ethereal Woman who graces the stage periodically throughout. She seems to represent the ghost of their mother. She is eerily beautiful and further reveals the depth of their imaginations.

Debra Booth designed a fantastic ramshackle home for the men to live in. It is nondescript and functional, like shacks of this nature are all over the world. Lighting designer Michael Giannitti transformed the space from the tiny room and took the audience into the men’s minds. Mongezi Ntaka composed original music for the production.

This play still strikes a chord with audiences. It explores issues that are strangely still relevant in the US in 2017.