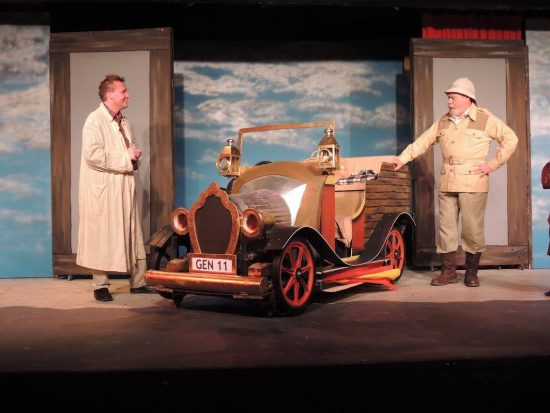 Chitty is more than a car. It’s a boat. It’s a plane.  And indeed it’s “a fine four-fendered friend” to the wacky inventor Caractacus Potts, his lovable two children, Jeremy and Jemima, and the beautiful Truly Scrumptious. All these characters and more are featured in the stage musical “Chitty Chitty Bang Bang,” now playing at the Way Off Broadway Dinner Theatre through June 3rd.

Based on the 1968 MGM film version of Ian Fleming’s children’s book, “Chitty Chitty Bang Bang” features songs by the legendary Sherman Brothers of  Disney’s “Mary Poppins” fame.  Believe it or not, the stage musical’s script is better constructed than the movie.  Even though the screenplay is co-written by Roald Dahl (“Charlie and the Chocolate Factory”) and the film’s director, Ken Hughes, the film lacks character and story development. In particular, that of the Vulgarian gang of Boris and Goran.  While Boris and Goran are introduced late in the film, the stage play, written by Jeremy Sams, introduces these villains in the very beginning, allowing for greater character and story development, and more importantly, more laughs and more fun.

… a magical production that is worth the ride.

The musical is centered around Caractacus Potts (Jeremy Trammelle), an eccentric inventor who restores an old race car from a scrap heap with the help of his children, Jeremy and Jemima (Keller Knight and Olivia Manos).  Named for the “chitty chitty bang bang” noise that the car makes, they soon discover its magical properties, such as the ability to float and fly. Jealous of the car, the spoiled and evil Baron Bomburst (Jordan B. Stocksdale) desires the magic car for himself and the Baroness (Jessica Billones).  Baron orders his villainous henchman, Boris and Goran (Joseph Waeyaert and T.W. Oriaveer) to spy and get the car, no matter what the price.  Caractacus, the children, Grandpa Potts (Brian Lyons-Burke), and Truly Scrumptious (Sarah Melinda), team up in a battle to save the car and themselves.

A standout performer in the production is Jordan B. Stocksdale who plays no less than three roles; the not too bright but very fat Turkey Farmer, the busy owner of the Scrumptious Sweet Factory, Lord Scrumptious, and the tyrannical, child-like ruler of Vulgaria and lover of toys, Baron Bomburst.  His counterpart, Jessica Billones as Baroness Bomburst is simply hysterical in the way that she delivers her purposefully overly dramatic role.  Billones and Stocksdale together make a great team, feeding off of each others infectious energy causing belly aching laughter to the audience.

Brian Lyons-Burke is perfectly cast as Grandpa Potts, a former war hero who loves to tell old war stories.  His warm and resonant singing voice is featured nicely in the songs “Them Three” and “Posh.” Both songs by the Sherman Brothers are wonderfully charming and may I say, perfectly witty in “Chitty.”

Trey T. Kiska is seriously evil as the Childcatcher whose goal is to make Vulgaria child-free.  Joseph Waeyaert and T.W. Oriaveer deliver some of the funniest moments of the play as Boris and Goran with plenty of slapstick and old-fashion, mustache-twirling, villain antics.

What I like about Jeremy Trammelle and Sarah Melinda’s performance as Caractacus and Truly is the genuine friendship that they develop along with the loving manner in which they treat the children.

“Chitty Chitty Bang Bang” is the most technically difficult production WOB has ever produced.  The car with all its magical properties gives lots of steam to the production.  A challenge that I’m sure will be overcome as the production continues are the set changes which were very noisy.  It didn’t help that the microphones were on during set changes, disturbing, in particular the quiet lullaby, “Hushabye Mountain.”

Overall, director Justin M. Kiska and the rest of the creative team and cast is to be commended for putting on a magical production that is worth the ride.