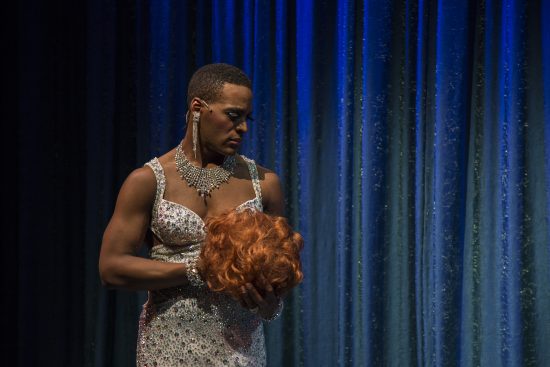 Rep Stage’s original world-premiere musical “Dorian’s Closet” will open your heart, mind, and soul to the life and times of Dorian Corey, a legendary female impersonator and fashion designer.

The play by Richard Mailman is a fictionalized account of Dorian’s female impersonator days in NYC and the events leading to the discovery of a mummified body in the closet of her Harlem apartment after her death from AIDS-related complications in 1993.  While the story may be fictionalized, the ridicule and prejudice that Dorian and her other female impersonator co-workers and friends were confronted with was very real.

…a sensational world-premiere musical that is relevant and ready for today’s audience.

Dorian’s co-workers at a club called Sally’s include Monica (a bubbly Rick Westerkamp), a plus size beauty; Angel (an innocent Tiziano D’Affuso), who dreams of one day having a husband and a home with a white picket fence; Pepper (a spicy Dwayne Washington), whose dress is easy to take off, but hard to put back on; Jesse (a brutally honest James Thomas Frisby), a realist who knows how to make friends and be a friend, no matter what the price; Amazing Grace (a confident Ian Anthony Coleman), who believes she is the club owner Sal’s (a tough as nails Keith Richards) favorite because of her brains and talent, but “mostly the drag.”

Stephen Scott Wormley as Dorian has embraced this complex role with dignity, compassion, and sensitivity.  Dorian’s romantic interest, Robert Worley (performed with a quiet charm by Jay Adriel), has a deep-voice and masculine features that eventually wins her trust and affection.

What I like about Richard Mailman’s script and lyrics is how he takes the complex story and characters and creates deceptively simple and straightforward dialog and lyrics.  It is interesting to see how he took some of what Dorian Corey said in the 1990 American documentary film “Paris Is Burning” and turned it into songs, like “I Shot An Arrow.”

Ryan Haase hits the bull’s-eye with his passionate and heartfelt music.  Where some new musicals are lucky to have one good song, here Haase delivers numerous tuneful delights, such as “They’ll Remember,” “I’m Workin’ Here,” “Shade,” and “Something About You.”

Adding to the proceedings is the choreography by Rachel Dolan, scenic design by Daniel Ettinger, costumes by Sarah Cubbage, light design by Joseph Walls, and sound design by Mark Smedley.

Director Joseph W. Ritsch is to be commended for delivering a sensational world-premiere musical that is relevant and ready for today’s audience. I feel so strongly about the high quality and importance of this musical that I predict that “Dorian’s Closet” will eventually be produced Off-Broadway.

Running Time: Approximately 2 hours and 15 minutes including the intermission.

“Dorian’s Closet” runs through May 14, 2017 at the Howard Community College in Columbia, MD. For more information, visit online.