Theatre Review: ‘Edith Can Shoot Things and Hit Them’ at Iron Crow Theatre 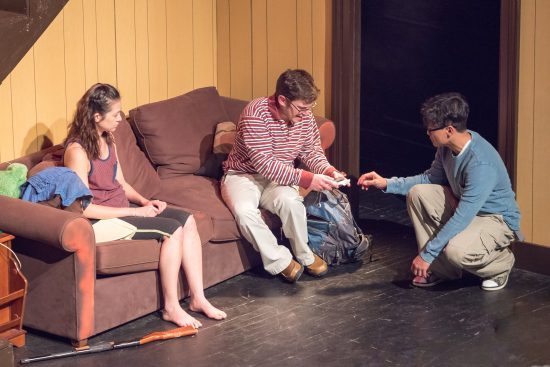 That question is answered in an engaging play written by A. Rey Pamatmat. Well directed by Sean Elias and Assistant Directed by Robert Corona, “Edith“ hits the mark thanks to strong acting by the three-person cast who are young adults portraying adolescents. All are making their Iron Crow Theatre debuts.

“Edith Can Shoot Things and Hit Them“ tells the story of a 12-year-old girl Edith, played by Pimmie Juntranggur and her 16-year-old brother Kenny (Mohammad R. Suaidi) who are left to virtually fend for themselves in a middle America farmhouse during say, the 1990’s.

Their mother, after leaving her husband, eventually died from a brain tumor. Their physician father moved in with his girlfriend and the young children are left to feed and take care of themselves with minimal involvement from Dad through depositing small amounts of money to a bank account on a sporadic basis.

Meanwhile, the friendship between Kenny and his math classmate, Benji (Matt Winer), evolves into a sexual and romantic relationship. Secret rendezvous, touching and kissing, and love letters that are clutched close to their hearts are all components of this tender, loving bond.

The siblings, each with strong personalities, are mature well beyond their years. Necessity is a great teacher and the kids are trying to learn.

Kenny is the quasi-guardian; yet he and Edith assume the roles of protectors as they battle to survive in a world where faith in adults is on the wane, and against all the odds, somehow they manage. He is protective of his missing father, makes excuses until reality forces him to take on a different view.

Edith masks her fears with a bravado not seen in many kids her age. She takes it upon herself to be a sentry and protects the farmhouse with a pellet gun as if she was on perpetual guard duty. That worked well until Edith shoots someone by accident and their world changes. She must face the consequences as her father sends her off to a reform school despite her high grades and extracurricular school activities.

For his part, Benji is victimized by an overbearing mother who picks out his clothes and delivers a glass of milk to him each night. When discovering Benji’s relationship with Kenny, Benji’s homophobic mother comes down hard on him, his older brother bullies him, and his father is aloof.

This family crisis forces Benji to spend more time with Kenny at the farmhouse. Edith easily accepts their relationship, and they form a tight family unit as the three are forced to grow up quickly.

None of the adults are onstage; the communication between Edith and Kenny and their father is largely accomplished through phone conversations, and in Benji’s case, what he reports through the dialogue.

As the tightly wound and smart Edith, Pimmie Juntranggur delivers a strong performance. Her character is mostly intense and precocious, mature beyond her years, and Ms. Juntranggur is convincing in that role.

Mohammad R. Suaidi competently portrays Kenny who feels the pressure of the world on his shoulders to provide for Edith and himself. Displaying solid acting skills, Mr. Suaidi conveys his angst towards the family developments.  In the scenes with Benji, he comes off quite well as the love-struck adolescent in such an endearing way.

As Benji, Matt Winer is solid as the nerdy kid that is dependent on his mother for everything. His personality changes and confidence grows over time as he gains strength from his romantic relationship with Kenny and his friendship with Edith. The one-on-one scenes with Mr. Suaidi display strong chemistry and are conveyed successfully with tenderness and humor.

A rather elaborate set is employed for this play’s mere three-day run. Designed by Joe Martin, half of the very functional set consists of a barn complete with well-placed bales of hay and a stairway to the loft. The other half is the interior of the farmhouse with the living room on the ground floor and a stairway to the bedroom—all with an ample amount of wood.  The multi-levels from where the actors appear offer an effective change in sight lines and add texture.

Lighting effects by Janine Vreatt help bring about scene changes in a smooth and rapid fashion in this well-staged play.

“Edith Can Shoot Things and Hit Them“ offers a glimpse of how children can overcome obstacles thrown at them by oblivious adults.  Make no mistake, kids will always need adults to guide them.  They just need good ones.

This is yet another good production from Iron Crow’s Season of the Dark Play. Only a few performances remain, so hurry. “Edith“ is a sure shot.

Running Time. Two hours and 45 minutes with an intermission.

Advisory: “Edith Can Shoot Things and Hit Them“ contains mature themes, adult language, sexual content and may not be suitable for patrons under the age of 18.