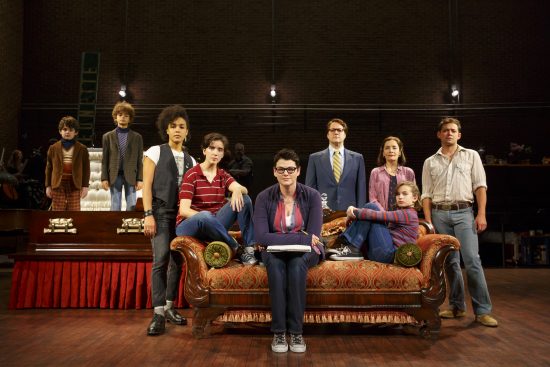 Caption: Alison Bechdel, lesbian cartoonist, sits at her writing desk, struggling for inspiration. She looks to her past, and what comes to her becomes “Fun Home,” the beautiful, poignant and Tony award-winning musical now playing at the National Theatre.

Based on the celebrated graphic novel, “Fun Home” is the story of Bechdel’s journey to understand her complex relationship with her father, and ultimately understand herself. The story is portrayed much like a true memory – non-linear and sometimes embellished or jumbled. But Alison as an adult shares these memories with us; she is onstage watching as her past plays out before the audience’s eyes. The story shows three versions of Alison – the adult version that guides us through the story (played marvelously by Broadway alumna Kate Schindle), college-aged Middle Alison (Abby Corrigan), and Small Alison (Alessandra Baldacchino), who gives us the most in-depth look at the complicated relationship between Bechdel and her father, Bruce (Robert Petkoff).

I wholeheartedly recommend seeing this groundbreaking musical while it is here in Washington D.C.

Much like life, the story is neither all happy or sad. There are times when the audience laughs out loud – like when Small Alison and her brothers Christian (Pierson Salvador) and John (Lennon Nate Hammond) make a commercial for their family funeral home (the “Fun Home” that gives the piece its name). Upbeat and in the funky style of the 70’s of their childhoods, the Bechdel children dance on top of a display coffin and sing into an embalming fluid bottle microphone. There are also sad moments, like when Alison’s mother, Helen (Susan Moniz) comes to grips with the secrets and lies that have been shadows in her life and shares them with her stunned daughter. And two moments of discovery that pull on the heartstrings in the best way; the touching “Ring of Keys,” where Small Alison sees a lesbian delivery woman at a diner, and recognizes a connection to this woman that she struggles to define, and the charming “Changing my Major,” where Middle Alison falls in love for the first time with the lovely Joan (Karen Eilbacher.)

Some of the most poignant and emotional moments revolve around Alison and her father, again both positive and negative. There are the memories of flying high while playing airplane, alongside when he rips her drawings out of her hands, trying how to show her how to do it “right.” There are also memories of handsome young men that her father would gravitate toward (Robert Hager), with Alison never realizing just how much she had in common with her father until it was too late.

This unique and groundbreaking musical is both heartbreaking and triumphant. While it can seem on the surface to be a very particular personal journey, there are so many aspects of it that ring true for everyone; looking back after a trauma and trying to sort out the truth of things, the painful pangs of growing up and discovering the fallibility of your parents and looking back on a moment, knowing what you know now, and desperately longing for one more change to change what happens. And the power of sifting through the bad and holding on to the good.

The entire cast was incredible and well-suited for their roles, but for me, the true stand-outs were the three Alisons and Bruce. Baldacchino not only had a voice powerful beyond her years but her acting and the complex feelings she was able to deftly express incredibly impressed this reviewer. Corrigan had the perfect combination of awkward charm and openness to allow the audience to take an amazing journey of change and development with her.  Shindle tied the story together in such a way that you felt as though she was experiencing the feelings of the audience with you for the very first time. You felt her confusion, affection and heartache as though it was your own.

It was also remarkable that these three actresses really seemed as though they could be different incarnations of the same person at different ages – their transitions were seamless. Finally, Petkoff took an incredibly difficult role which, in the wrong hands, could alienate the audience and make Bruce unlikeable and unsympathetic, and turned him into a real, tactile man. There were times that you were angry at his behavior and times that he made you laugh, but you could 100% understand why Alison loved him so much, which was integral to the success of the story. The song “Telephone Wire,” where Alison details her final car ride with her father, willing something to change, her desperation to say something that would change the course of what was to come, reduced this reviewer to tears – this musical is a deeply personal piece of Bechdel’s heart that she was brave enough to share with the world.

There is a live orchestra that actually shares the stage with the cast, which adds greatly to the richness of the performance (Music Coordinator – Antoine Silverman). The set was a great achievement – one of Bruce Bechdel’s hobbies was restoring houses, so the set becomes more finished and grand as the story progresses, until being stripped bare again by the end. The costumes were also perfect and helped the audience navigate the different time periods of the musical (Scenic and Costume Design by David Zinn.) Finally, a story this complex could not have been as engrossing and effective without excellent direction, which it had, and Sam Gold won a Tony Award for his efforts in 2015. I wholeheartedly recommend seeing this groundbreaking musical while it is here in Washington D.C.

Advisory: Due to some sexual situations, adult language, and adult situations (suicide), this show is recommended for audiences 16 and older.

“Fun Home” is at the National Theatre now through May 13th. For more information on tickets, please click here.