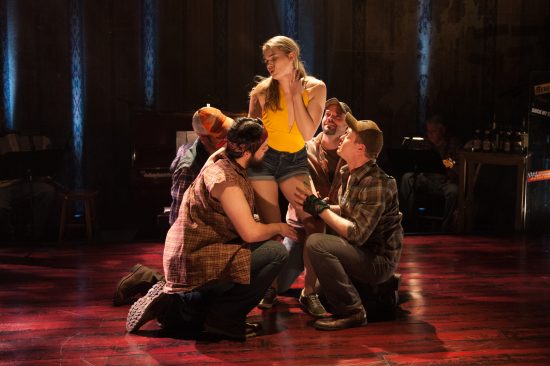 Depravity in a young girl’s heart shakes everything apart in Signature Theatre’s production of “Midwestern Gothic.” This brand-new dark comedy-musical based on the book by Royce Vavrek comes straight from Signature’s own Matthew Gardiner as part of the American Musical Voices Project.  It attempts to tell a story about, as characters put it, “the blind leading the blind.”  The characters’ limited vision, unfortunately, becomes contagious.  The talented cast cannot bring clarity to this play’s vision, which appears more derivative than distinctive.

Stina (Morgan Keene) is a small-town girl with big-town dreams.  She’s tired of the Midwestern nowhere world of “hicks” and “rednecks” who surround her, including her inattentive stepfather Red (Timothy J. Alex) and naive farmhand Anderson (Sam Ludwig), both of whom share an unreciprocated infatuation with her.  Viewing men as inferior, she welcomes their luring eyes and uses lust to emotionally manipulate everyone into doing what she wants.  She occupies her time with photoshoots done by Red and drags Anderson into sadistic art projects that she suggests will somehow fuel her dreams of Hollywood.   After Red sleeps with barfly Luanne (Rachel Zampelli), he and Stina contemplate running off to chase a new life.  The logic of their departure is ambiguous at best, as character motivation in ‘Midwestern Gothic’ presents itself rather undeveloped.

Long-time Signature regular Matthew Gardiner brings a good deal of life and fervor to the musical numbers, as actors belt out ballads while by Music Director Timothy Splain’s score alternates between the alluring tones of a soft piano to a cacophonous burst of dread when the drums and banjo kick in.  The atmosphere is at moments terrorizing, but in softer times recalls a sense of lost innocence and, in Alex’s powerful “Ol’ Deb,” a longing for the American Dream the country still inspires, even if at times the singers and instruments appear to compete for power.  The purpose of many scenes and numbers, though, is questionable.  Keene pours her heart into Stina’s fantasies about her imaginary “Hired Boys,” which attempt to explore her mind’s corruption, but they become repetitious.  Stina states verbatim that she views herself a femme fatale, and these numbers only serve to constantly re-establish this single trait.

Scenes that progress the plot are bogged down by questionable execution and by the ambiguity of the lead’s personality beyond her cruelty.  An astounding scene where Stina binds and blinds Anderson to a telephone pole while comparing him to Saint Sebastian (“Saint Sebastian”) ends anticlimactically – but not intelligibly.  Exactly what her religious motivation is – or why, for all the suspenseful buildup and her reference to the martyr, she does not kill him – remains unclear.  All that has been established about her goals to this point is that she wants to cause pain and suffering.  A girl with early-crushed dreams who can only turn to sex and violence justified by religion recalls Aileen Wuornos.  But with no rationale other than shallow restated character traits, ‘Monster’ this is not.  Those elements of drive and empathy so key to connecting a character to an audience are missing, and this lack of discernible humanity makes watching a loathsome, unidimensional sociopath exploit others very frustrating. The penultimate number (“Mamma Cries into Her Tea”) does attempt, finally, to shed some light on Stina’s past, but the instantaneous revelation is disappointingly pat and lends no nuance to her character.

Other minor characters are more enjoyable and established. The best is Deb (Sherri L. Edelen), the tough-as-nails bar-owner unfortunate enough to be Stina’s mother.  Her song chastising a bar patron (“Whisky Courage”) feels like filler, but her assertive performance brings it life and personality.  This scene alone cements her as the most entertaining character in the play, letting no man take down her pride and position.  Sheriff Dwayne (Bobby Smith) is also of note, bringing some welcome comedy to this dark comedy as he tells Red about an unfortunate soul who died with her face stuck to a frozen river.  Everything from his affable nature to his exaggerated accent sells his character, who would make the most of a terrible small-town situation to keep that human spirit alive and midwestern warmth a-burning.  But the reason it works is because it recalls the masterful crafting of this classically stereotypical personality in Joel and Ethan Coen’s ‘Fargo.’

The play makes no secret of its identity as a pastiche.  The program describes Vavrek and songwriter Josh Schmidt’s script as having “tinges of films like ‘Lolita,’ ‘Fargo,’ and ‘Misery’” and being written in a style reminiscent of Sam Shepard and Martin McDonagh.  However, the elements it borrows from those works are not executed with the same caliber of development.  It’s easy to compare Stina’s uncomfortably youthful innocence to Michal from McDonagh’s ‘The Pillowman,’ but Michal had a character expanded on by his troubled relationship with his brother.  Stina hardly interacts with anyone beyond plot purpose or setting up another musical number, and for all the commonalities she shares with Deb, the two share no interactions until the finale that could shed light upon the origins of her behavior, her misandry, or her seeming Electra complex.  Her character is more akin to Dottie from Tracy Letts’ ‘Killer Joe,’ right down to her interactions with her father, but while Dottie was driven into a murderous rage by others constantly forcing her into situations until she brutally took initiative, Stina goes through no arc and remains a constant, start to finish.  There needs to be something to track and follow in our protagonists – something inside going beyond empty tracings of familiar masterpieces.

While “Midwestern Gothic” radiates Gothic identity, using warm lights and haze to paint these lost souls in harsh chiaroscuro, the script is not nearly so confident.  At its best, it is ambitious for its attempt to tackle the genre through multiple lenses.  Otherwise, it offers a muddled assemblage of those multiple lenses in an incomplete effort to craft a vision or inspiring essence of its own.