Theatre Review: ‘Nine’ by The Colonial Players of Annapolis 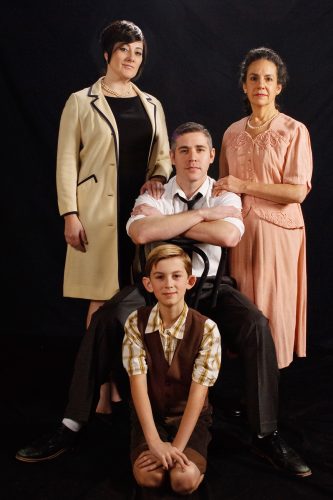 Dreamy sequences draw you in from the moment The Colonial Players of Annapolis enter the fantastical world of Guido Contini, a complex Italian cinema director inspired by Marcello Mastroianni’s character in the Federico Fellini film “8 ½.” Director and choreographer Ron Gidding along with Musical Director Andrew Gordon take “Nine,” a musical by Arthur Kopit (book) and Maury Yeston (music and lyrics), and transform it into a mesmerizing, endearing production complete with intoxicating muses, touching childhood memories and spirited scenes that volley back and forth between reality and the surreal.

There is a lot going on visually, emotionally and physically and this talented cast of “Nine” pulls everything together with grace and precision.

There is a lot going on visually, emotionally and physically and this talented cast of “Nine” pulls everything together with grace and precision. It’s hard not to resist leading man Jason Vellon, who does a wonderful job capturing the many dimensions of Guido Contini–a flawed, funny individual facing a midlife crisis. In “Guido’s Song,” Vellon shows his range and the extreme nature of the character, brilliantly summing it up with the lyrics “I would like to be here, I would like to be there, I would like to be everywhere at once.” Yet Guido’s fear of missing out eventually catches up to him as multiple women–real and make-believe–vie for his affection and his mind becomes so cluttered he’s finding it difficult to think of his next cinematic masterpiece. Alicia Sweeney, who plays Guido’s strong and loyal wife Luisa, easily wins over the audience with the powerful and telling song “My Husband Makes Movies.”

There are other moments that stand out including when Mama Contini, played by Susan S. Porter, beautifully sings “Nine” to young Guido played by rising actor Jackson Parlante. Fast forward to older Guido meeting with his main star Claudia Nardi, played by Erica Miller, revealing the director’s vulnerability and his penchant for being a Casanova (which ultimately becomes the subject of his next film) in their tender performance of “A Man Like You.” Two showstopping numbers worth noting are “Folies Bergere” featuring Rebecca Kyler Downs who brings elegance and energy as producer Liliane La Fleur, and “Be Italian” led by Debbie Barber-Eaton as the sultry Saraghina.

Costume Designer Beth Terranova does impressive work with the sartorial choices ranging from Guido’s stylish sixties black and white ensemble skinny tie and all to the colorful dresses worn by the company in the various scenes.

The Colonial Players of Annapolis production of “Nine” is quite seductive so don’t be surprised if you actually find yourself calling out for more Guido Contini.

“Nine” runs until April 30, 2017, at The Colonial Players of Annapolis theater at 108 East Street, Annapolis, MD 21401. Information about this show is available here.