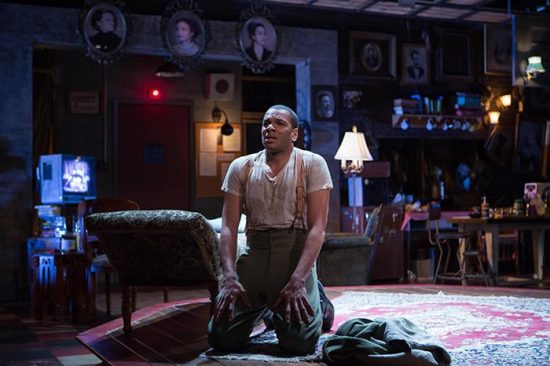 Biko Eisen-Martin in ‘No Sisters’ at Studio Theatre. Photo by Teresa Wood.

Cast members of Aaron Posner’s “No Sisters” are on stage playing darts and drinking coffee as you walk into the Milton Theatre located on the second floor at Studio Theatre in Washington, DC.  From the ceiling to the floor the set designed by Daniel Conway features antiquities such as lamps and chairs. In this “weird a** existential Chekhovian green room” hangs the portraits of the three sisters illuminated by lighting designer Jesse Belsky.  Most interestingly, a half dozen TV monitors broadcast the live performance of Anton Chekhov’s “Three Sisters” which is being performed simultaneously in the Mead Theatre downstairs.

…this play isn’t just about them, it’s about you…a deeply moving and unique experience.

“No Sisters” is actually Aaron Posner’s world-premiere re-imagined adaptation of Chekhov’s “Three Sisters,” having previously adapted Chekov’s “The Seagull” into “Stupid F-ing Bird” and “Uncle Vanya” into “Life Sucks, or the Present Ridiculous.”

Olga, Masha, and Irina are absent from “No Sisters,” while the other characters take turns jumping from the theatre downstairs to the theatre upstairs.  Timing must be just right in order for this to work. That is one reason why they have the TV monitors so the actors can always have an eye on the other stage.

As you can tell already, this isn’t your normal play.  Much of the play consists of monologues about life, love, purpose, and the quest to find out what makes them happy.  But this play isn’t just about them, it’s about you.  Yes, you have chances to interact with characters, asking yourself the same questions that they ask themselves.  For me, I found this to be a deeply moving and unique experience.

Ryan Rilette is terrific as Andréy, a lepidopterist; one who studies butterflies and moths.  My interpretation of his character leads me to believe that he symbolizes the butterfly effect which is the concept that small causes can have large effects.  Fights with his sisters lead to drinking, gambling, and then an all out battle with his own wife, Natásha (a hilariously excitable Kimberly Gilbert).

With his distinguished beard and finely tailored suit, Todd Scofield is perfectly cast as Kulýgin, Másha’s husband who is a respectable school teacher, but who is sometimes too focused on the details to  see the obvious that is happening around him.

The three soliders are all fighting for the love of the same woman; Irína.  William Vaughan embodies all of the hopes of a young man Fedótik, a photographer without a camera, but does have a vision and an entrepreneurial dream. Biko Eisen-Martin gave truly an OUTSTANDING dramatic performance as Solyóny.   His character seems to be suffering from posttraumatic stress disorder as his behavior is somewhat aloof, stressed out, and irritable.  He wants to be happy yet finds it hard to do so.  Ro Boddie is delightful as Túzenbach his affable friend and fellow soldier who wants to save Irína but has to focus on surviving by going back to work in a brick factory.  In the last act Solyóny and Túzenbach have their biggest battle yet which is against each other.

The impeccable quality of acting from Nancy Robinette as Anfísa ranks up there with the likes of Meryl Streep and Angela Lansbury.  Anfísa is the aging serving woman who cared for the four siblings from their birth.  With age comes knowledge and her character knows the history of the people around her and the meaning of love.

Written and Directed by Aaron Posner, “No Sisters” is a deeply moving and unique experience that I wish many theatregoers will have the chance to see.  I have tremendous respect for Aaron Posner.  What will this clever and witty playwright think of next?