Theatre Review: ‘Or,’ at Round House Theatre 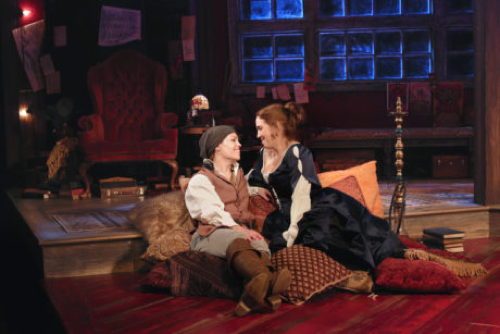 Whether we admit it or not, there’s a tendency we all have to break the world into binaries in order to simplify our decisions in the short-term or long-term.  I just did it there.  Twice.  After all, were we to realize the multitude of options truly available, surely we’d go mad deciding every single facet.  Of course, no one’s forcing us to meticulously overthink every single decision, so perhaps if we took some of our own time in parts to think beyond “this or that” we might have some fun exploring the alternatives we never realized.  It’s fitting, then, that before Round House’s production of “Or,” even starts, the stage is set with the title projected onto the curtains, spinning slowly and indecisively, as if contemplating where to settle, before whimsically spiraling in as the show opens.

After the first scene, we are immediately aware of this play’s encouragement of alternatives as the curtains pull away to reveal an apartment befitting Liz Duffy Adams’ terrifically universal “1960s as 1667” script; as period as it is anachronistic and as elegant as it is casual.  Adams’ work is realized by the frantic, emotionally-charged cast led by acclaimed satirist Aaron Posner, delivering a play all about breaking down society’s predetermined boundaries.  An endearing exploration of individual progressive defiance performed often in secret but brought to life and a greater social existence through the arts.

…ever-unfolding, feels so seamless that its emotions can change without a moment’s glance, for amidst the fun of the night, there is, too, tragedy.

Holly Twyford stars as Restoration-era playwright and former spy Aphra “Astrea” Behn, who, following attracting the attention – and allure – of King Charles II (Gregory Linington), pens her first major play in the company of gender-bending breeches role champion Neil Gwynne (Erin Weaver).  The creative process becomes complicated, however, when Aphra is given a deadline of dawn.  Worse so, that same night, her royal lover comes to visit, her muse demands her love and attention, and William Scott, her past love and a double-agent long thought dead, arrives to warn her of an attempt on the King’s life tomorrow morning!  All spirals out of control, as crucial decisions lacking clear answers are thrust upon Aphra more and more.  The night grows later, the dawn draws closer, and her play’s ending remains as elusive as her solutions to her romantic and social predicaments.

Posner has taken Liz Duffy Adams’ phenomenal script and executed it with the wittiest, most silver-tongued and rapid-fire farcical glee possible.  It is a delightfully flippant but refined spectacle wrapped in a fearless timeless engagement with modern and past gender explorations that nearly overwhelms with its charm.  Fitting for a play about abstraction, it conditions the audience to both expect more and expect the unexpected.  One early exchange, for example, has Aphra and Neil debating whether a return to unashamed lechery or a newly-revamped Golden Age would benefit society and draw the genders closer.  The arguments don’t differ all that much, both speaking to a greater freedom, but are dissimilar enough to debate, for, despite their foolishness, these creatives know better than to see the world in black-and-white.  We accept this conceit early on and listen, as the sentiment is similar and the conversation is engrossing and titillating. Later, we are rewarded with a contrasting continuation as Weaver emerges in another scene as Aphra’s play commissioner, Lady Davenant, extolling in a motormouthed monologue (Aphra literally gets not a single word in) the virtues of a society where women have access to greater monetary possessions.

Weaver is not the only one to assume a dual role – in fact, she and Linington take on the roles of three separate characters each.  Going off the play’s (sometimes literal) flirtations with sexuality and gender is a recurring motif of masks, figurative or otherwise, worn by the cast.  Characters are draped beneath layers of designer Kendra Rai’s extravagant coats, capes, vests, and wigs, and often arrive in disguise.  Extra levels of secrecy emerge from Aphra and William’s past as spies, Neil’s androgyny, and Charles II wears a mask in multiple scenarios to keep his romance and identity secretive.  The commentary, of course, reflects the societal pressure to conform to one determined nature of oneself, which is subverted constantly by every character.  As such, not only do we witness them as themselves behind closed doors, but the actors will suddenly shift roles without warning.

The role shifts serve as not only demonstrations of commonalities between people of wildly different statuses and showcases of our cast’s terrific range, but also Posner’s flawless comedic timing.  Weaver assumes a spectrum of eccentricity in her roles as maid, actress, and Lady, and while Linington is fantastic as the poise but subtly childish Charles, he is in prime form as the impulsive, two-faced William.  Keep in mind that after the first scene, there are no scene transitions, so we are constantly engrossed in the real-time events, wondering what intrusion will throw the night into further confusion.  A moment where Linington has to switch roles twice backstage within roughly 10 seconds is absolutely perfectly timed and received a well-deserved row of laughter from the audience.

The plays narrative, ever-unfolding, feels so seamless that its emotions can change without a moment’s glance, for amidst the fun of the night, there is, too, tragedy.  Brehn delivers a touching monologue in the beginning about the world afire she witnessed as a spy.  The assassination attempt, too, always hangs over the head of all the fun times we are experiencing, so there is a sense of dread for the good times coming undone.  Yet the play is so subversively anticlimactic — always keeping an optimistic side alive and delivering resolutions so wholly unpredictable that we’re delighted we never considered them possible.

The play could be said to speak to the escapist qualities of entertainment and its craft, but “Or,” never claimed to be a play about simplicities.  Rather, it is an entertaining and provocative farce that also serves as a testament to possibility and impending change.  It anticipates that good – momentary or enduring – will be found in times of hardship experienced differently across class, status, occupation, and gender, and expressed and enforced through social movements and the arts.  Idealized at times?  Certainly.  But admirable for never confining its broader political narrative and for acknowledging the challenges and limitations that come with each progressive step.  In this play, resolutions are more wonderfully audacious than we could’ve imagined, endearingly interlacing the bitter and the sweet.  Unpredictability is an understood constant in “Or,” ironically unchanging but as stunningly-executed and eagerly anticipated as the play’s final sunrise.

Advisory: Adult themes and sexuality throughout.

“Or,” runs through May 7 at Round House Theatre.  For more information, click here.