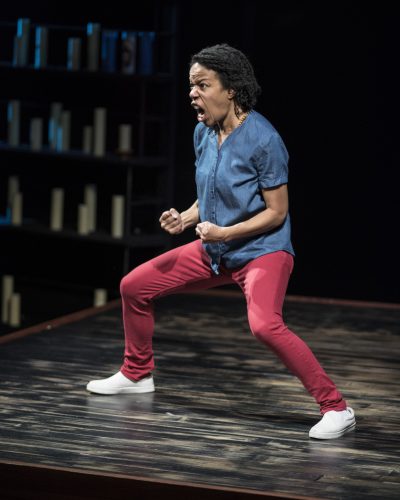 Nilaja Sun performs one of the many characters of “Pike St.” Photo by Teresa Castracane.

Erik Erikson once said, “In the social jungle of human existence, there is no feeling of being alive without a sense of identity.” The concept of identity and much more is examined in the dynamic one – woman show “Pike St.,” now playing at Woolly Mammoth Theatre Company.

“Pike St.” is a story of anticipation. The show opens on a Puerto-Rican American family preparing for what promises to be a devastating storm. Evelyn is on the phone with the electric company, trying to ensure that she will have a generator in case they lose power. Her daughter, Candy, is hooked up to a ventilator and several other life-saving machines due to a mysterious illness that had struck suddenly a few years before. While she is on the phone, she first speaks to her elderly neighbor before her father blows into their apartment. Papi is looking forward to some grown-up fun with a lady-friend and is hoping to hustle Evelyn out the door for a few precious minutes of privacy.

I highly recommend this dynamic piece of theatre…

However, they are all anticipating something much more exciting than the storm; the return of Manny, brother, uncle and son, from his service in the Middle East. He is returning as a hero, having saved himself and two of his fellow servicemen from an attack. His return is a bright spot on a literal dark horizon, as Hurricane Delores looms. Manny goes out to pick up some supplies and runs into an old friend, who triggers some bad memories – not just of his recent near death experience, but lingering resentments from their youth as well. The family ends up back together at their apartment as the storm begins to rage, with both hope and doom looming.

The uniqueness and innovation of this piece of theatre cannot be understated. Sun plays every part in this show with effervescence and ease. She picks them up and puts them back down with a deftness that speaks to the experience, work ethic, and creativity she has come to be known for. Every aspect of the show puts emphasis back on Sun’s performance. The asymmetrical (and almost empty) stage is flanked on both sides by rows and rows of candles and has a sort of awning above (set design by Meghan Raham). Added then is colored light, judiciously used and amplified by the blank background and awning (lighting design by Tyler Micoleau).

Despite the plain and basic set, the production is able to transport the audience into places as far-flung as the Middle East to the deepest recesses of Candy’s mind. Sound is also effectively used from something as small as giving the appearance of a window being opened and closed, to an IED on the dusty roads of the Middle East (sound design by Ron Russell.) Sun’s costume also seems deceptively simple – a basic blue jean button-down top, skinny red pants, white sneakers and, a not immediately seen, wooden crucifix. While this outfit seems unremarkable, it somehow seems an appropriate outfit for each distinctive character, as Sun twists her body, face and voice to inhabit the diverse residents of Pike St. Ron Russell hits all of the right notes and effectively directs the powerhouse Sun to a truly incredible performance.

When asked why she decided to perform this story as a one-woman show as opposed to casting multiple actors, Sun commented that she wanted to highlight the common thread of humanity that runs through all of these characters. I believe she made the right choice; there are aspects of many of these characters that is inherently unlikeable, but by tying them to the more sympathetic characters it allows the audience to remember that no one is all good or all bad. It also intensifies the high level of social commentary that Sun is making. Topics of race, family, love, trauma, illness, forgiveness, hope and belief are all on the table in this piece, unflinchingly presented and ringing of truth. I highly recommend this dynamic piece of theatre, which will make you think about the world which these characters inhabit, and the one you inhabit as well.

Advisory: Due to adult themes and language, this production is recommended for adults only.