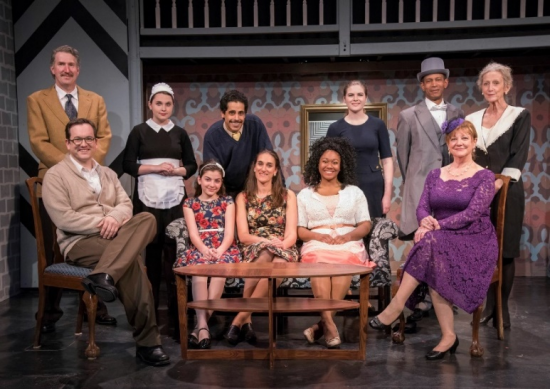 “Pygmalion,” a cheeky romantic comedy written by George Bernard Shaw is a love story that bears a different quality from the typical warm fuzzies one would expect from a classic romantic tale.  One of Shaw’s most popular plays, “Pygmalion” was the inspiration to the popular musical adaptation, “My Fair Lady.”  In this story, you’ll find love based on respect versus sentiment and equality over hierarchy.  Themes of the intellectual and social liberation of women are also evident is this play, as Eliza Doolittle (Mariea Terrell), the female lead, finds independence in breaking past her limitations of class and gender.

The play begins in a rainy scene on a busy London street where Eliza, a working-class flower girl, encounters Henry Higgins (Cameron McNary), a phonetics professor, and Colonel Pickering (James Bunzli), a linguist.  With smug confidence, Professor Higgins bets with Pickering that he can turn the unrefined, Cockney-speaking Eliza into a duchess and pass her off as a lady at an ambassador’s garden party.  Eliza overhears this conversation and pays the professor an unexpected visit the next day, demanding speech lessons in hopes of landing a proper job in a flower shop. Pickering, also visiting, challenges Professor Higgins on his aforementioned bet and doubts Higgins’ claim to refine Eliza within so short a time.  The bet between the men is made official, and Professor Higgins summons Mrs. Pearce (Dianne Hood), his housekeeper, to bathe Eliza and dispose of her raggedy clothes.  As time passes, the professor puts Eliza’s newly found refinement to the test, and the hilarity of it all is inevitable!

Director James Knipple cleverly frames Shaw’s original Victorian setting in 1960’s England.  Upon entering the theater and throughout the show, British rock-and-roll of the sixties transports you to such a time.  Costume design by Renee Vergauwen stays true to the period with floral sheath dresses and British-style tailoring and tweed.  Transitions from scene to scene are so seamless and artfully done, that the transitions are scenes in themselves with hardly any break in illusion.  I found myself laughing during the transitions just as much as I was during other humorous moments of the show.

The cast members were all distinct in their respective characters, each with believable British accents that made it clear who was higher or lower on the social class ladder.   What I enjoyed most from this cast is the contrast between the brutal, biting sarcasm of McNary’s Higgins (Brace yourself!) and the delicate, sympathetic compassion of Bunzli’s Pickering.  Another enjoyable contrast was E. Martin Ealy’s lowly, yet opportunistic Mr. Doolittle, Eliza’s working-class father, who made it clear that this man has lived the hard-knock life, yet enjoys a peculiar freedom from “middle-class morality.”

Some acting adjustments could have made the opening rain scene more convincing, as some characters made me believe it was truly raining while others seemed unaffected.  Also, a few makeup adjustments to create a dirtier Eliza would have added a finishing touch to her appearance (I wasn’t convinced she truly needed bathing, just a change of clothes.).  However, Miss Terrell’s attitude, sass, and rough-around-the-edges characterization of the streetwise Eliza made this minor technical detail easy to overlook.

Overall, I enjoyed the performance of this cast.  Compass Rose Theater simply made the show fun!

“Pygmalion” plays through May 21, 2017, at Compass Rose Theater in Annapolis, MD. For more information, visit online.