Theatre Review #2: ‘She Loves Me’ by The Arlington Players at Thomas Jefferson Community Theatre 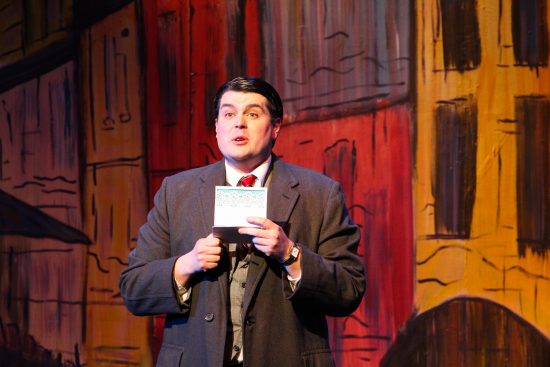 Sam Nystrom as Georg Nowack in “She Loves Me.” Photo by Scott Stark.

“She Loves Me” is the musical adaptation of the original 1937 play by Miklos Laszlo, a story whose most famous incarnation was Nora Ephron’s “You’ve Got Mail.” With music by Jerry Bock and lyrics by Sheldon Harnick, the action takes place in the original story’s 1930’s Budapest and centers on the staff at a perfume shop, which includes colorful characters like unlucky-in-love Ilona, slick ladies’ man Kodaly, fresh-faced delivery boy Arpad, and dependable Ladislav. At the story’s heart is Georg Nowack, lead salesman, whose pleasant work environment is upset by the arrival of Amalia Balash, a confident go-getter who goes and gets a job at the perfume shop despite Georg’s skepticism. The co-workers clash, a situation frustrated by Georg’s newly tense relationship with his boss, the normally kind Mr. Maraczek. More intriguing, of course, is that both Georg and Amalia seem to have anonymous pen pals…

Michael Kharfen’s direction brings out the smart comedy of Joe Masteroff’s book with its panache for quick repartee and snappy one-liners. “They like each other very much?” says Arpad, shocked to hear that Georg and Amalia’s bickering might be a sign of attraction. “Shouldn’t we tell them?”

“She Loves Me”… has the engaging charm of a music box; it creates a small, perfect world of song and dance, one you will not want to close.

The production boasts two very strong leads. Sam Nystrom plays Georg with a good-guy grace that endears him immediately. In “Tonight at Eight,” in which he worries about his impending first meeting with his female pen pal, he infuses his voice with near-comic heartfelt frustration and anxiety. Jolene Vettese glitters as Amalia, giving a robust emotional performance, at times bold (“No More Candy”) but also vulnerable (“Will He Like Me?). Nystrom and Vettese possess a nice chemistry and become even more likable as they squabble with each other.

Democratic in its distribution of songs, the supporting cast also get ample time to shine. Trevor Telesz steals many scenes as the delivery boy, and would-be salesman, Arpad Laszio. He literally vibrates with excitement as he leaps and cartwheels around the stage in “Try Me.” Mikel Rios makes it easy to sympathize with Ilona’s quest for love, and Jack Stein is solid as Georg’s unsentimental, scrappy friend and wingman. John Barclay Burns turns in an excellent performance as the conflicted Mr. Maraczek, while Taylor Witt makes Steven Kodaly a believable and fun Casanova. The show benefits from an epic bit from Chuck Dluhy, playing the put-upon head waiter of a questionable establishment.

Impressive music and visual styling help to bring the production together. The orchestra, led by Scott Richards, provides a bustling soundtrack of brassy notes for street scenes, as well as a romantic score for intimate moments. The music blends perfectly with Cathy Oh’s precise choreography. Her precision works to comic effect in the excellent, sometimes silent, set-piece, “A Romantic Atmosphere,” set in a shadowy rendezvous spot where would-be lovers stalk a beleaguered waiter, as well as each other.

The production comes to an expectedly romantic conclusion, with twists and turns tied into a perfectly happy bow. Theatre-goers might find themselves humming and singing some of the catchy songs the next day (this theatre-goer did). Audiences of “She Loves Me” will enjoy a visually splendid, consistently delightful musical full of warmth and laughter.

Running Time: Approximately 2 and 1/2 hours with a 15-minute intermission.

Norah is a writer and editor. She was a teacher for six years, four of which were spent in South Korea. While she will always miss having kimchi on demand, she is happy to be closer to family. She also enjoys dance, graphic design, and BBC dramas.