Theatre Review: ‘Something Rotten!’ at the Hippodrome Theatre 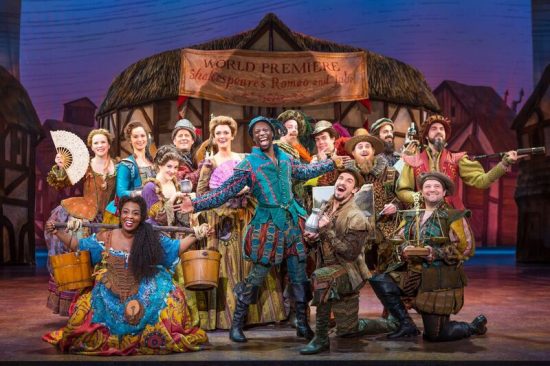 The cast of “Something Rotten!” National Tour Photo by Jeremy Daniel.

Without question, Shakespeare is an acquired taste. Many love his works; others not so much. But how many actually HATE Shakespeare? Well, in the hilarious musical “Something Rotten!” there is certainly one: Nick Bottom. He is a struggling playwright with an underachieving acting troupe who has nothing but disdain for the ultra-successful Will Shakespeare in late 16th century England. And that’s just the beginning.

“Something Rotten!” continuing its national tour by stopping by the Hippodrome for an all-too-brief run, delivers countless “you’re killing me” moments from end to end. That is, if you find the likes of puritanical oppression and the black plague humorous. Comedic moments are highlighted by well-placed double entendres and a not-too-subtle stream of gaiety, or should I say gayness, running through the production.

The Tony Award winning production irreverently takes on other Broadway musicals like no other, even more so than “The Producers,” “The Book of Mormon,” and “Shrek” to name a few. In fact, there are no less than forty references to Broadway musicals in “Something Rotten!”

Contributing to the show’s excellence are the stellar sets designed by Scott Pack, the brilliant period costuming including exaggerated codpieces worn by the men and even omelet costumes (where else would you see those?) designed by Gregg Barnes, the hue-rich lighting design by Jeff Croiter, the effective sound design by Peter Hylenski, and the fine orchestra conducted by Brian P. Kennedy.

Its music is catchy for sure but the lyrics are stunningly clever. Most successful Broadway musicals have a show-stopping number that is elicits ovations from audiences. “Something Rotten!” boasts two such epochal moments.

The elaborate number “A Musical” is performed halfway through the first act. Its high-energy tap dancing and kick line choreography and fabulous lyrics, which include clever references to a bevy of Broadway musicals, such as “Rent,” “South Pacific,” and “A Chorus Line,” drew a thunderous extended ovation on opening night. Also bringing down the house was the second act “Make an Omelette” that contains similar ingredients.

Moreover, a solid musical may present one or two scene-stealers during the course of the show. “Something Rotten!” delivers a multitude, which accounts for the prodigious amount of laughter-producing lines.

The insanely funny story centers on the aforementioned Nick Bottom (played superbly by Rob McClure and his younger naïve brother Nigel Bottom (Josh Grisetti) who barely can make ends meet. Nick more than Nigel is so jealous of Shakespeare (Adam Pascal) that he is desperate to write a successful play for a change.  (All three of these actors are reprising their Broadway roles.)

Finding a soothsayer, Thomas Nostradamus (Daniel Beeman), the nephew of THE Nostradamus, Nick is told that the wave of the future is a musical, whereby the actors break out into song and dance in the middle of their dialogue. What a concept!

Nostradamus, who apparently did not have all his wires connected properly, looked into the future and predicted the next great play would be “Omelette,” instead of Shakespeare’s greatest hit that sounds similar. Mr. Beeman is rip-roaring funny in this sequence and is one of the show’s scene stealers.

Shakespeare, meanwhile, displaying surprising insecurity, is worried that the Bottom Brothers are stealing his work. The ensuing madness, dominated by eggs, needless to say, comprises the rest of the plot.

…a gorgeous spectacle in every respect

Perfectly cast as Nick Bottom, Rob McClure puts on an amazing performance not only by his comedic prowess but also his singing and dancing. Full of energy, Mr. McClure frantically tries to compete with Shakespeare and has the audience rooting for this underdog. He sets the tone right in “God, I Hate Shakespeare.”

Adam Pascal does well as the conceited, gloating, swaggering, Billy Idol-like Shakespeare fresh off his hit play “Romeo and Juliet.” He is the rock star of his time; men and women alike adore him, except, of course, Nick Bottom. He delivers the numbers “Will Power” and “Hard to Be the Bard” with gusto.

As Nigel, Josh Grisetti, looks up to Shakespeare though he tries to work with his brother on producing the musical. However, his love interest, a Puritan named Portia (Autumn Hurlbert), convinces Nigel, a poet, that he should write from his heart. Somehow, co-writing “Omelette” doesn’t feel right to him.

Showcasing a smooth tenor voice, Mr. Grisetti clicks in duets with Ms. Hurlbert, the ballad “We See the Light,” and with Mr. McClure, “To Thine Own Self.”

Another of the show’s scene stealers is Maggie Lakis who plays Bea, Nick’s wife (Mr. McClure’s real-life wife). Realizing her husband’s struggles and a desire for a better life, Bea wants to help out any way she can. That includes acting as a part of Nick’s acting troupe though it is illegal for a woman to appear on stage.  She even takes on physical jobs for men disguising herself as a man. Ms. Lakis delivers splendidly in “Right Hand Man.”

As the strict father of Portia, Brother Jeremiah (Scott Cote) seems to be the father of all Puritans. Bible clinging, intolerant, set in his beliefs, Brother Jeremiah has a habit of slip-of-the-tongue oops moments revealing that perhaps he’s hiding something.  If so, he’s not hiding it too well.  Mr. Cote deliciously plays this role to the hilt.

Another deft performance is turned in by Jeff Brooks as Shylock, the Jewish moneylender, who cannot legally invest in the musical. Dropping Yiddish words during the dialogue, Mr. Cote is such a mensch.

Nick Rashad Burroughs as the Minstrel who opens up each act with “Welcome to the Renaissance” does a fine job in setting the tone for the show.

The remainder of the cast provides superb support for the leads with their energetic, precise dancing and strong vocals.

“Something Rotten!” is a gorgeous spectacle in every respect. The wonderful music, hilarious lyrics, zany story, well-placed satire and an amazingly talented cast and crew make this a must-see show.  As the tour advances around the country, I wish all the performers well and to break an egg.

Advisory: This show contains sexual innuendo and may not be suitable for children.

“Something Rotten!” Plays through April 23 at the Hippodrome Theatre at the France-Merrick Performing Arts Center, 12 N. Eutaw St, Baltimore, MD 21201. For tickets, call Ticketmaster at 800-982-ARTS or visit here or here.