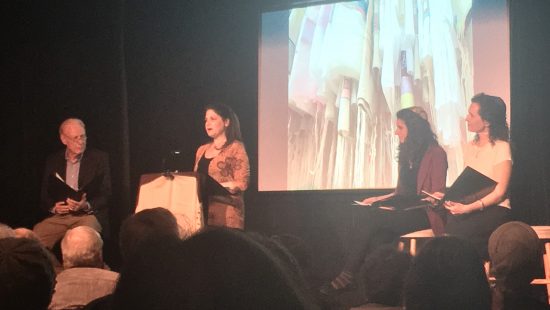 Poignant, powerful, and at times perturbing was the deeply moving staged reading of “Stories from the Fringe: Women Rabbis, Revealed!” presented by the Gordon Center for Performing Arts in conjunction with The Strand Theater and directed by cast member Bari Hochwald.

Whether you are familiar with Judaism or not, you would most certainly be profoundly moved by this heart-wrenching, inspiring, and joyful piece that speaks to both women and men about finding and pursuing our life’s passion undeterred by obstacles.

I feel transformed by my attendance at the single-evening performance of this compelling play where the words of eighteen Los Angeles female rabbis speaking frankly in previously recorded interviews about their spiritual passion, heartbreaks, and love for their calling have been thoughtfully pieced into a raw and gripping dramatic performance.

The intimacy of this piece was like glimpsing into the uncensored diaries of these visionary women whose longing for the rabbinate triumphed over the anxieties of being an outsider, or their dating difficulties (how many men are secure enough to marry a rabbi? Thankfully, a few!) or the rabbi-motherhood balance, or their own reluctance to embrace the God that they secretly craved.

Much like Roberta Flack in her song “Strumming My Pain,” I found myself in tears as the three actors playing the rabbis spoke of life experiences that, while different in context, mirrored the emotional intensity of especially sharp moments on my own life journey. But how can I begrudge the small embarrassment of digging for tissues to very obviously wipe my eyes when I compare that to the joy of being able to connect so deeply with the stories being told and the actors sharing them with us?

I very much enjoyed the format of the play, which was written by Rabbi Lynne A. Kern and Ronda Spinak and, as noted, taken almost verbatim from recorded interviews with eighteen actual rabbis. Rather than overwhelm us with too many actors or forced dialogue, the play was cleverly divided into topical sections, performed by three female actors with sole male actor Ed Klein introducing most sections either with the questioning and often despising voice of patriarchal prejudice or else simply stating the topic.

The female actors, Bari Hochwald, Mindy Shaw, and Sarah Weissman, would usually begin each section as a trio, trading short phrases or a few sentences back and forth to paint a broad picture of the topic with input from the many contributing rabbis. Then, one actor would step forward and deliver a monologue in the voice of a single rabbi. The monologues were usually the most gut-wrenching emotional moments of the show, but the trio repartee would often catch me off guard with an unexpectedly jolting emotional twist.

Bari Hochwald, who also directed, played the voices of the mid-career rabbi. I was profoundly moved by several of her monologues, for instance when she spoke of her father’s death and said that “at that time, God died, too.” Her reflections on her childhood understanding of God as Superman and humans as Lois Lane were bittersweet as she progressed to an adult comprehension that “God’s job wasn’t evil prevention.”

I was also struck by her passionate delivery of a monologue describing her first experience with tefillin, which are small boxes of scripture that her prayer group ritually bound to her head and arms as she chanted to God, “I bind myself to You. I bind myself to You.” I think the entire audience was moved as Hochwald brought to life the raw passion of this moment.

Mindy Shaw portrayed the voices of the near-retirement rabbi. From sharing stories of participation in the SCLC shortly after Martin Luther King, Jr.’s assassination (only to be told that no, she didn’t belong and that she should go work with her own community) to another monologue where she described debating with men over whether or not women could become rabbis and in the process changing their minds, Shaw gave us the history of the trailblazing women who first made the way for other women to follow.

Shaw’s portrayal of one rabbi’s determined prayer petitions to end her infertility were agonizingly painful to witness when she discovered that God’s answer to her was not yes, but no. We all felt her heart break on stage with the shock of that discovery and I know that I was struck by Shaw’s delivery of final quiet acceptance of that fate.

The early-career rabbi was played by Sarah Weissman who began the evening with wide-eyed excitement for God when she discovered that she loved the deeply religious life that Judaism could offer her and the passion she discovered for becoming a rabbi whose faith would inspire activism. I felt her strong determination and frustration when she boldly declared to those who suggested a slightly “alternate” path, “I don’t want to marry a rabbi; I want to be a rabbi.” I felt like cheering!

Weissman also gave us other moments in the life of a young and modern female rabbi, from the challenge of nursing her baby on interviews and while ministering during services, to choosing tattoos as a religious means of expression (which are traditionally taboo in Jewish culture and carry the perceived risk, accurate or not, of preventing one’s burial in a Jewish cemetery.) She also shared stories of the joys she found in mixing parenting with her rabbinical duties despite the challenges. I was inspired by Weissman’s feisty zeal to find her own way, however that looked.

As this was a staged reading, the set was simply stools for the actors and a podium for the monologues wrapped in a tallit, or prayer shawl (an object of which the fringe is the most important part!), but with the power of the women’s testimony, truly no other set felt necessary. I did enjoy the beginning of the performance where images of various women rabbis were projected onto a screen behind the actors, but I think it was a good choice to limit these photos to the beginning of the show so as not to detract from the intensity of the play.

My only disappointment was that this was a one-night event! I hope that this performance with these talented actors will be re-staged at Jewish Community Centers around the area so that more people can feel the power and understand the struggle of being a woman rabbi. Whether you are familiar with Judaism or not, you would most certainly be profoundly moved by this heart-wrenching, inspiring, and joyful piece that speaks to both women and men about finding and pursuing our life’s passion undeterred by obstacles.