Theatre Review: ‘The Fabulous Lipitones’ at The Little Theatre of Alexandria 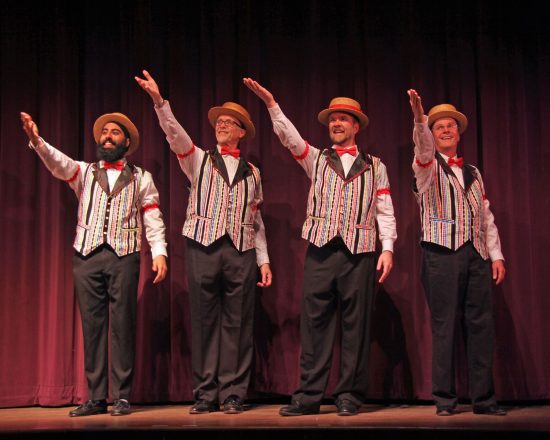 left to right: Gurpreet Sarin, John Brown, Peter Halverson, and Jerry Hoffman in “The Fabulous Lipitones” at The Little Theatre of Alexandria.

There’s something about listening to Barbershop music in an intimate space that seems “just right.” The tight harmonies, subtle inflections, and story-telling lyrics make being up close to the performers a treat that keeps a smile on your face. The Little Theatre of Alexandria’s production of “The Fabulous Lipitones” is a wholesome mix of fine singing and observational humor, but also carries a not-so-subtle message about how prejudice can inhibit the ability to connect with the simple things we have in common.

The musical comedy by John Marcus and Mark St. Germain features a small cast of four and opens with the three surviving members of a barbershop quartet attending a memorial service for their recently deceased lead singer. Phil Rizzardi (Peter Halverson), Howard Dunphy (Jerry Hoffman), and Wally Smith (John Brown) are faced with the difficult decision of whether to disband their beloved quartet or find a new fourth member to fill the lead role in time for an upcoming competition. This dilemma exposes the life circumstances that make it difficult to keep such a close-knit group together, and also those that make belonging to it so important. Through chance, the trio overhears the singing of a mechanic at the local garage and are so impressed that they blindly invite him to audition; however, when Bob Singh (Gurpreet Sarin) arrives, his unexpected ethnicity throws a wrench into the audition prospects, with protests from one member, in particular, causing most of the plot’s turmoil.

...a treat that keeps a smile on your face.

Although there are poignant moments, the show is decidedly on the lighter side with most of the humor drawn from the quirks of reaching upper middle age – physical ailments, the complexities of navigating a smartphone, keeping up with a changing world, and even the challenges of online dating through a pharmacists-only website! Director Chuck Leonard does an excellent job of balancing the trio’s antics with newcomer Bob’s charm and appeal. Sarin’s performance is charming with high-energy and quickly has the audience endeared with and rooting for his character, Bob.

And that rooting is needed as Halverson’s character, Phil, is well-portrayed as the reluctant and insensitive opposing force to Bob being welcome in the group. Caught in the middle, Hoffman and Brown’s characters Howard and Wally are tasked with mitigating much of the drama. Brown’s frequent quips about the perils of middle-aged dating win a lot of laughs and Howard’s touching portrayal of a devoted husband in a marriage challenged by illness adds heartfelt moments to the show.

For such demanding singing roles in a small ensemble musical, the cast does an excellent job with the vocal challenges and are able to pull off the quintessential blended sound of Barbershop. So well in fact that the highlights of the show are the musical numbers that sound great and are also cleverly staged and choreographed. By the end, being a member of the audience begins to feel like you’re part of the show with the quartet performing to you as attendees at the competition they’ve been prepping for.

The set designed by Matt Liptak captures perfectly the man-cave style basement of quartet member Howard Dunphy’s midwestern home with all the necessary old couches, Buckeye throw pillows, antlers, and whiskey bottles. Without question, we are in a town where brown skin making the trek from an auto garage to men’s quartet is certain to raise eyebrows.

This is a very fun show with just enough message at its core that you can’t help but appreciate it. Lots of smiles. Lots of laughs. And lots of great Barbershop!

Running Time: 2 hours and 40 minutes with an intermission.