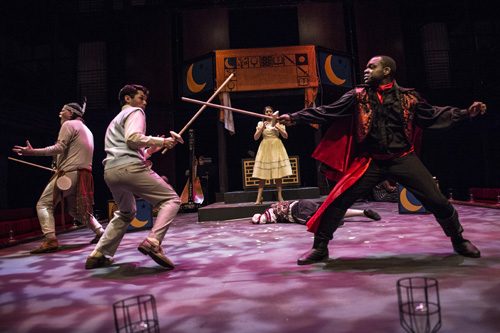 It has been an exciting season this year with a few Baltimore theaters expanding their repertoire by including a musical in their traditionally non-musical lineup. Chesapeake Shakespeare Company (CSC) is currently presenting a sentimental favorite – the longest running musical in history and likely the most performed – “The Fantasticks.” In June it will be closing Off Broadway in New York City after a total 57 years in performance.

With book and lyrics by Tom Jones and music by Harvey Schmidt, this allegorical tale of life and love is infused with a bit of Shakespeare (a boy and a girl, a wall and disapproving parents). Based on “Les Romanesques” by the author of “Cyrano de Bergerac,” Edmond Rostand, guest director Curt L. Tofteland has created a charming production. Like other presentations in recent years, he has made the musical more family-friendly by altering the unpleasant references surrounding the darker meaning of the “abduction” of Luisa.

Though it is set in no particular era or place, it is definitely a romanticized version of a simpler time, like the 1930s of Thorton Wilder’s “Our Town.” As our guide, the suave and charismatic El Gallo (Gerrad Alex Taylor) – both slightly jaded bad boy and narrator – opens the show (later joined by the rest of the cast) with the signature song, “Try to Remember.”

The young lovers, Matt (Rafael Sebastian) and Luisa (Roxanne Daneman), have fallen in madly in love, or the concept of love they have read about in books and poetry. They have done this in spite of the wall built between their gardens by the feuding fathers to keep them apart. The fathers are the tall and lanky Hucklebee (Lyle Blake Smythers) and the short and cherubic Bellomy (David Tabish) respectively. The twist is that this separation was part of a master plan by the parents. As anyone who is a parent knows, all you have to do is say “no” and children will, more often than not, do the opposite as comically expressed in “Never Say No.” A reverse of “Romeo and Juliet,” these fathers want their children to marry.

To seal the deal, the fathers arrange an abduction of Luisa so Matt can rescue her, play the hero and thus end the “feud.” They hire El Gallo who in turn contracts two characters to assist him with the plan. Henry (Gregory Burgess) is an aging actor who comically mangles Shakespeare and travels with his sidekick, Mortimer (Steven Hoochuk), a Cockney costumed as an American Indian (a stereotype for villain years ago that we have long since discarded) who is a master of death scenes. The real scene-stealers belong to the fathers and the “actors.” They alone are worth the price of admission. Henry and Mortimer are so appealing that it is hard to see them as bad fellows – just down-on-their-luck actors in need of work.

All seems to end happily ever after but when the magic of the moonlight disappears, reality under the glare of the sun starts to affect the young lovers. Both Matt and Luisa feel confined and look to adventures beyond. They soon discover that the world is not all they imagine. Because we have become a much more mobile society since the 1960s, this part feels a little dated.

The actors have no mics so projection, especially with the iconic songs that everyone has come to love (“Soon It’s Gonna Rain,” “I Can See It,” “They Were You”), is so important. Sebastian seemed to struggle at times, but made up for it with his earnest and enthusiastic performance. Daneman also gives it her all and possesses power and beauty in her voice. The other actors do a solid job but as they settle in, hopefully all the voices will get more confident and stronger.

Taylor is captivating as the dashing and handsome El Gallo, guiding us through the story, as well as being an integral part of it. Robby Rose as the Mute brings a subtle, comic touch without saying a word as he provides props to the actors throughout the show.

The two musicians, keyboardist Belinda Chen, and harpists Kristen Jepperson and Laura Stokes who alternate performances, do a wonderful job with the beautiful score. The production team – set designer Chester Stacy, lighting designer Katie McCreary and costume designer Kristina Lambdin, as well the rest of the team – successfully creates a simple and timeless atmosphere. This production would be a perfect way to introduce young families to the magic of musical theatre and kudos to CSC for continuing to stretch their theatrical muscles with “The Fantasticks.”