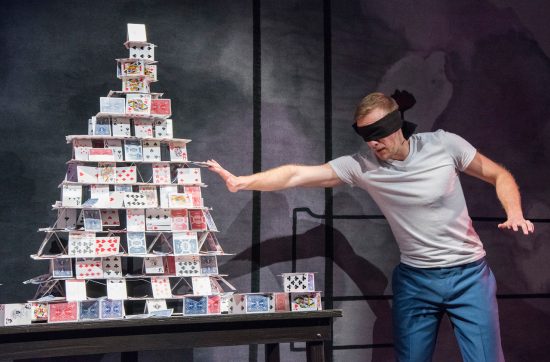 British author Terry Pratchett once wrote, “It’s still magic even if you know how it’s done.” In “The Magic Play” that is currently inhabiting the Mainstage at the Olney Theatre Center in a rolling world premiere, the audience is kept in the dark as to how each trick is accomplished; the results are what matter in what is perceived as magic.

There is no illusion that “The Magic Play” is pure entertainment.

More importantly, relationships can’t be forged through magic, whether they are romantic or familial, nor can they be magically repaired when broken or destroyed.

Playwright Andrew Hinderaker, who had previously won a Helen Hayes Award for his superlative play “Colossal,” which appeared at Olney two years ago, lays out all these cards on the table with his latest work, “The Magic Play.”

There are clear similarities between the two. In each of these unconventional dramas, Mr. Hinderaker blends real-time spectacle with a plotline that includes a gay relationship and father relationship.

Additionally, Mr. Hinderaker wrote the role of Mike in “Colossal” specifically for actor Michael Patrick Thornton, who had suffered a spinal stroke that left him paralyzed from the neck down.  The role of The Magician in “The Magic Play” was also written for a specific performer; in this case, it was for talented actor-magician Brett Schneider.

Skillfully directed by Halena Kays, Mr. Schneider, as The Magician in “The Magic Play’s” three-person cast, performs an assortment of mainly card tricks that produce a number of wow moments for the audience. For most of these, Mr. Schneider meanders through the apprehensive crowd to select “volunteers” to assist in the tricks onstage.

Nothing that would cause any embarrassment to the assistant ensues. However, this device makes each performance unique and improvisational.

Adding to the enjoyment, Projections Designer John “Smooch” Medina allows the audience to view The Magician’s illusionary movement of the cards that are on a table by the use of a close-up live feed projected on a screen above the stage. And Jesse Belsky’s deft lighting design produces the appropriate atmospherics.  (There are other technical marvels in the presentation that I will discuss later.)

While The Magician is in complete control of his performance in front of an audience and his ability to mesmerize it with astounding trickery, he finds out that the ability to control a relationship does not work, and the deception inherent to magic performances that bleed into his personal life proves to be damaging like a collapsing house of cards.

The Magician had undergone a painful break-up with his boyfriend, The Diver, played convincingly by Helen Hayes Award-winning, athletic-looking actor Jon Hudson Odom. He is seen practicing his dives from a platform, sans taking the actual plunge, for a shot at the Olympics thanks to a clever set designed by Lizzie Bracken.  The interactions with The Diver are manifestations of The Magician’s memories.

Though only hints of their relationship transpire during the play, it illustrates how even The Magician’s memories are controlled. Because The Magician is so invested in his work and the deception that is a major component of it, The Diver could simply not trust him, especially when he had lied about visiting his father, played authentically by Olney veteran Harry A. Winter.

Father, an over-the-hill magician in his own right living in Reno, had abandoned his son when he was a youngster. He had taught his son the tricks of the trade so to speak, but the younger one blossomed into an accomplished artist.  The Magician’s attempt to acquire the paternal love he had lacked provides solid dramatic moments.

In an odd twist late in the second act, The Magician asks the audience to reverse the earlier admonition to turn phones off and instead, turn them back on. He urges the patrons to text to a specific number their request for any kind of magic trick they would like to see performed.

Another assistant is selected at random. She writes on a card what she would like to see magically happen. The atmosphere turns political as she scribes, “The cheeto must disappear” to an approving but muted crowd reaction.

Within minutes, the requested texts are hand-written not only on the playing cards but also projected on the screen. There were similar such requests as well as others like “saw a person in half” and “make the deck disappear” causing this segment to be refreshingly unpredictable theatre.

Mr. Schneider is a superbly skillful magician. His showmanship and charming demeanor seduce audience members to believe what he wants them to believe. That’s what magic performances are all about.

On top of that, Mr. Schneider is a proficient actor. He exhibits strong chemistry with the other fine actors, Mr. Odom and Mr. Winter, during their dramatic and emotional exchanges.

There is no illusion that “The Magic Play” is pure entertainment. The personal foibles of a magician are not usually observed by the public.  This weaving of the showmanship with the human element is carried out competently by an excellent script, a talented director, cast and technical crew. It is highly recommended.

Running Time. Two hours and 15 minutes with an intermission.

Advisory: This play contains profanity and is not recommended for children.