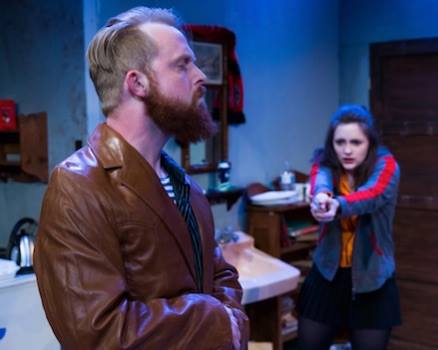 Irish playwright Conor McPherson’s “The Night Alive” is an incredibly sobering, yet delightfully hilarious portrayal of contemporary life. Directed by Robert McNamara, the show masterfully uses brash dialogue between cast members to explore themes such as spirituality, death, and the perception of time.

Set in modern day Dublin, “The Night Alive” follows Tommy (Barry McEvoy), a down on his luck odd job man. Tommy has seemingly given up on life and lives a fairly bleak existence: he lives in a filthy “flat” (which happens to be a room he rents from his uncle; he constantly argues with his estranged wife regarding their two children; and only has one close friendship with his sometimes employee, Doc (beautifully portrayed by Brian Mallon), who, according to Tommy, happens to process new information up to fifteen minutes behind everyone else.

“The Night Alive” does a fantastic job of exploring complex, thought-provoking material while still, amidst the (sometimes) hopelessness, highlighting the all too often overlooked pleasantries of every day life

Although Tommy’s life wasn’t ideal, it was at least predictable, that is, until Aimee (Mollie Goff) showed up. On his way out to grab some chips (a man’s gotta eat right?), Tommy witnesses Amy being abused by her boyfriend. In an effort to do something good with his life, he helps her. As the story unfolds, audience members witness, in a very real way, the complexities of every day life and may even find themselves seeking answers to the very same questions that arise amongst the actors.

Brian Mallon’s portrayal of Doc was fantastic. It’s disclosed fairly early on in the production that Doc has a mild disability; although he’s quick to note that he shouldn’t even be working (he just works because he loves doing it so much). Although he may not process information as quickly as his peers, he works just as hard as everyone else and, like every other character in this production, he just can’t seem to find his place in a society that has seemingly left him in the dark.

Speaking of being left in the dark, equally memorable was Robert Sheire’s portrayal of Kenneth, Aimee’s ex-boyfriend. Kenneth is a deranged fellow with an affinity for violence. It was clear at the onset of his entrance that his character was created to do one thing: wreak havoc; and wreak havoc he did. Later in the production, in an altercation with Tommy, Kenneth express beautifully how easily one can be consumed by darkness, and that this darkness can be so pervasive that death can be viewed as a sweet escape.

The entire production took place in Tommy’s flat: one room with a bed, kitchenette, and camper bed sometimes slept in in by Doc. Michael C. Stepowany’s set is small, but not noticeably so. The lighting, done by Marianne Meadows, was absolutely integral to the production’s flow. (As the show took place solely indoors, the idea to use the lighting outside the back door of Tommy’s flat as a vehicle to portray night vs. day was ingenious). Last but certainly not least: the music. The soundtrack to “The Night Alive” was nothing short of ear candy for the music lover. Sound Designer Denise Rose did a phenomenal job of cloaking the somber production in a blanket of optimism that was certainly welcomed due to the melancholic nature of the show.

“The Night Alive” does a fantastic job of exploring complex, thought-provoking material while still, amidst the (sometimes) hopelessness, highlighting the all too often overlooked pleasantries of every day life. With an ever-changing society, it’s easy to wonder (as Marvin Gaye so elegantly did) “What’s Going On?” But eventually, we must stop wondering and remember to live our lives, lest we get left in the dark (or even worse, consumed by it).

Running Time: One hour and forty five minutes with no intermission.

‘The Night Alive” runs through April 9, 2017 at the Atlas Performing Arts Center in Washington, D.C. For tickets and information, click here.