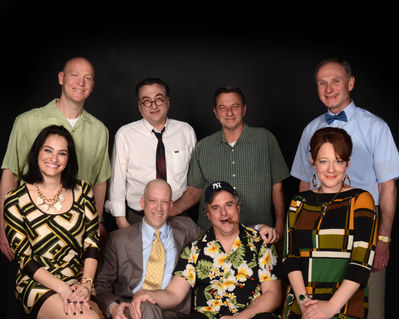 Neil Simon’s hilarious play “The Odd Couple,” now playing at the Vagabond Players, proves that opposites attract, but not so often in a peaceful manner that one might expect. The play debuted on Broadway in 1965 featuring Art Carney and Walter Matthau and lead to the 1968 film starring Jack Lemmon as neurotic neat freak Felix Ungar and Walter Matthau reprising his role as fun loving slob Oscar Madison.  The films success was followed with Tony Randall and Jack Klugman as the respective roles in the classic 1970s television series. CBS television had a show reboot in 2015.

…the funniest comedy Vagabonds has done yet.

Director Steve Goldklang has accepted the challenge of bringing out the contrasting personalities in Unger and Madison.  Goldklang has mastered showing off the friendship of two people who live as polar opposites while providing the basis for genuine comic and emotional moments.  The characters presented shined through the Neil Simon script as easy today as done over 50 years ago.  Relatable situations and everyday characters that, everyone still understands keeps this timeless comedy as fresh today as it was on Broadway years ago.  Characters were never rushed and were allowed to shine in this wonderful presentation.

Actors Eric C. Stein as Felix Unger and Larry Malkus as Oscar Madison have exceptional chemistry, especially when showing the uncertainty that both feel after the failure of their respective marriages.  The disorganization which represent s Oscar’s life is put back together with Felix’s controlled behavior.    The sympathy Felix feels for his ex-wife about how he is impossible to live with leads to some emotional yet funny exchanges between Oscar and Felix.

The supporting cast of Tony Colavito (Speed), Thom Peters (Vinnie), Don Kammann (Murray), and Mark Scharf (Roy) as the poker buddies show a wide variety of emotion to accentuate the positive traits Felix and Oscar show.   Thom Peters as Vinnie is hilarious as the mild-mannered yet fussy component of the Friday night poker game. Don Kammann as Murray does a fine job as the cop who provided the political incorrectness that every group of friends enjoys.  Mark Scharf as Roy delivers the role with dry wit as the pragmatic accountant who shows a stability to Oscar which helps him to balance his issues with Blanche, Oscars’ ex-wife.   Tony Colavito as Speed is no slouch either as the gruff and sarcastic complainer who often picks on Vinnie and Murray.

Gwendolyn Pigeon (Rachel Roth) and Cecily Pigeon (Anne Shoemaker) add much enjoyment to the stage as the upstairs neighbors.   Throughout the time spent with Felix, both ladies find appreciation for his kind and sensitive side while maintaining humor and grace.  Felix’s initial oblivion to the flirtation presented by Gwendolyn and Cecily is one reason why this is the funniest comedy Vagabonds has done yet.

The fight for self-worth is something both Oscar and Felix relate to while being on both sides of their lifestyle meters.  Oscar and Felix prove to be the replacement to each others spouses while being the counterbalance that they truly need for their own personal growth.  All in all,  this is a wonderful offering of Neil Simon’s Broadway classic.

“The Odd Couple” plays through May 7, 2017, at the Vagabond Players – 806 Broadway, in Baltimore, MD. For tickets, purchase them online.