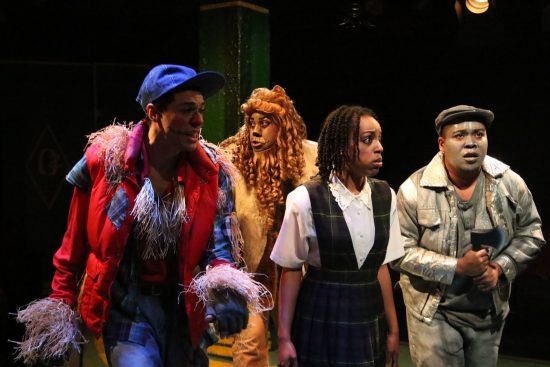 Expertly Directed by Tracie M Jiggetts, with lively Musical Direction by Brandon Booth, the Spotlighters Theatre’s production of “The Wiz” is simply amazing! With its talented cast and Baltimore twist, this production is not to be missed!  The music and lyrics by Charlie Smalls (and others) and a book by William F, Brown provides the source material for this exceptional musical based off of the classic L. Frank Baum story.

Dorothy, played by Morgan State alumni Amber Hooper, demonstrates a superb voice that never wavers throughout the entire show beginning with “As Soon As I get Home.”  The compassion and strength Dorothy shows to Scarecrow, Tin Man, and The Lion brings the best out of each other in their individual moments.  Encountering The Wiz, her defense of her new found family’s needs ahead of her own show a strength of character that would make Auntie Em proud.

With its talented cast and Baltimore twist, this production is not to be missed!

The Wiz’s (a truly wonderful Timoth David Copney) progression from pompous, then reflective, then humbled from faded memories and broken dreams after leaving as a “nobody from Dundalk” in a hot air balloon shows a depth in character that never grows old.  The citizens of Oz views his arrival as a miracle while The Wiz views his arrival in Oz as a new lease on life.

Addaperle, the Good Witch of the North, (a magical Reneta Hammond) gets plenty of laughs when she makes light of Dorothy’s name during their initial meeting.  Glinda, the Good Witch of the South, (a touching performance by Elaine Foster) provides the maternal instinct in Oz necessary to give Dorothy the assurance her return home will be alright.

In addition to his excellent physical comedy, Justin Johnson as Scarecrow has a laugh that is a cross between “Revenge of the Nerds” and Horshak from “Welcome Back Kotter. ”

Lion (J Purmell Hargrove) demonstrates a show stealing swagger, mixing confidence and weakness within a character that needed to show both.  Lion initially comes off as a big bully only to be proven a lonely cub, not the king of the Jungle he wanted to represent.  One of the show highlights is the rousing duet between Lion and Dorothy in the song “Be a Lion.”

Tin Man’s (Shae Henry) disappointment of not having a heart in his suit after being cursed by Evillene is only exceed by the enthusiasm on receiving his heart at the end.  The Tin Man shows how tin, while not considered the strongest of the metals, can still be strong enough to support four people on the road to meet their respective destiny.  DDm as Evillene is wonderfully boisterous,  outrages, and sassy in his turn as the Wicked Witch of the West.

The representation of brains, courage and the heart all have a definite Baltimore feel.  The cast reminds the audience that together goals can be met as long as you “Believe in Yourself.“   You will find yourself at home within this family friendly show.

Running Time: Two hour and 20 minutes, with one 15-minute intermission.