Come learn from top names in the voiceover industry with MdM Talent’s exclusive Voiceover Workshops and Industry Panel! Our three LA-based voiceover guest-artists are some of the most sought-after talent, teachers, and coaches in their industry: Debi Derryberry, Daniel Ross, and David Sobolov. They have voiced iconic roles such as JIMMY NEUTRON in “Jimmy Neutron: Boy Genius,” DONALD DUCK in Disney’s “Mickey and the Roadster Racers,” LUCKY for Lucky Charms, the role of DRAX THE DESTROYER in Marvel’s Guardians of the Galaxy, GORILLA GRODD in CW’s “The Flash,” and HUNDREDS of other animated series, films, radio and TV commercials, video games, and live action features. To register, please contact Artistic Director Sarah Scheiner at 540-229-1991 or sarahscheiner [at] gmail.com. Tickets can also be purchased on our Eventbrite link: bit.ly/MdMVoiceover . We are offering special discount and group rates so please reach out to Sarah to get a discount!

The Friday night Industry Panel from 6:30-8:30pm will be moderated by Justin Timpane and will involve the artists in a discussion about their lives and careers, then will open up to questions from the audience. Afterward, guests will be able to circulate to each of the artists stationed around our event space and will have the opportunity for signatures, pictures, book purchasing and signings, etc…This is an unprecedented event in DC area and we sincerely hope you join us!

The weekend’s events break down as follows:

The three voiceover workshops over the course Saturday and Sunday will cover topics such as:

– How to Market & Brand Yourself in the Voiceover Industry

– Special Demands and Challenges of the Voiceover Market (and how to overcome them!)

– Working with Copy and What to Expect in the Studio

– How to Record A Successful Mp3

– How to Make Some of the Most Common Noises and Sounds

– The Impact of Social Media

Each workshop will be limited to 30 participants, divided into 3 groups of no more than 10 participants each. These groups will circulate to 3 different classes with each voiceover artist over the course of 3 hours. This will afford them the opportunity to experience a wide variety of techniques and topics from three different experts who are highly regarded in their field. The final 30 minutes will conclude with a Q&A with all 3 guest artists and will focus on the voiceover industry and other useful advice for aspiring voiceover talent. (For the youth workshop, parents are invited to participate in the last 30 minute Q&A Session.) *PLEASE NOTE* – Some prior acting/performing experience is requested as this workshop is geared toward those interested in expanding their acting skills and possibly pursuing a path in the voiceover industry. 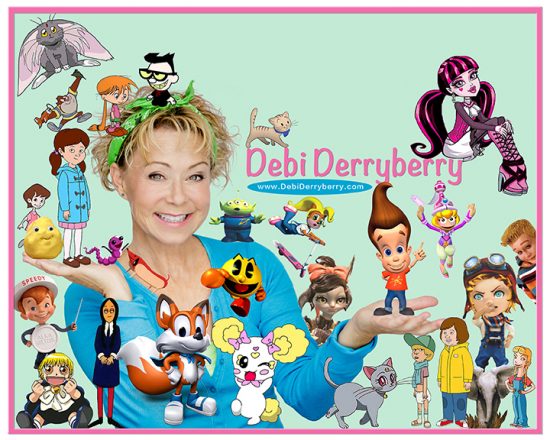 Debi Derryberry was raised in the quiet desert community of Indio, California. When she was only nine-years- old, she got her first guitar and started writing and singing songs. In high school, she served as captain of the gymnastics team, drama club, and then went to UCLA as a pre-med candidate, singing, acting and writing songs the whole time. In lieu of med school, Debi sought out her musical talents and moved to Nashville, Tennessee to pursue a career in country music. After three years of performing, writing and singing in Music City, she returned to Los Angeles to launch her voice-over career, and she has garnered feature roles in numerous high-profile films and TV shows ever since.

Now after almost 30 years, Debi is one of Hollywood’s most active and sought after voice-over artists, best known for voicing Jimmy Neutron in the Academy Award-nominated Paramount/Nickelodeon film, “Jimmy Neutron-Boy Genius”. Some of her roles are: Draculaura on Mattel’s “Monster High”, Maureen, Philip and Kenny, on “F is For Family”, Coco from “Crash Bandicoots” Taime, in “Guild Wars”, the Baby Unicorns in Hasbro’s “Hanazuki” and voice-over roles in “Toy Story”, “Wreck It Ralph”, “Zootopia”, “Smurfs the Lost Village and “Trollz”. Other voice work includes: Candy from “Glitter Force”, Tigley from “Doc McStuffins” Wednesday from “The Addams Family”, Gnocchi from “Curious George”, Weenie from “Oswald the Octopus”, Zatch Bell, Ryo Ohki from “Tenchi Muyo”, Jackie from Howie Mandel’s, “Bobby’s World”, Jeannie from the Emmy-Nominated “Life with Louie”, and Nergal Jr. on “Grim and Evil” for Cartoon Network.

Also an on-camera actress, Debi’s credits include many commercials and TV shows, “iCarly” and “True Beauty”, and she can be seen in the features “Ghostworld”, “Comic Book the Movie” and “Free Willy”. In that film, Debi was the stunt double who actually rode the whale. Debi has written and recorded award-winning pre-school music albums. She wrote the song “My Dog’s My Buddy” when she was only 9-years- old, and her song “BabyBanana” hit #1 on Sirius/XM Kids! Voted “Best Voice-Over Coach in Los Angeles” by BackStage West, Debi now teaches voice-over classes to voice-over artists on how to master their craft. She has passed on her tips and tricks into her book “Voice-Over 101- How to Succeed as a Voice-Over actor” available on Amazon. To learn more about Debi, please visit her website debiderryberry.com or on IMDB (Debi Derryberry).

Daniel began his journey in the entertainment industry as a theater actor from Maryland, eventually working his way to on-camera work and later film production. As his career evolved, he moved to Los Angeles to begin pursuing work in the voice over industry and was quickly noticed for his talents by many major clients. To date, Daniel has performed as a voice actor in several cartoons, radio commercials, video games, and most notably has performed such iconic roles as Donald Duck in the smash hit series “Mickey and the Roadster Racers” on Disney Channel and Disney Junior, as well as the lead-villain Starscream from 2007’s “Transformers: The Game” selling over 3.6 million copies worldwide, to the affable Lucky of Lucky Charms Cereal!
On camera, Daniel is widely known for his breakout comedic performances in the movies, “Ninjas vs Zombies, “Ninjas vs Vampires”, and “Ninjas vs Monsters”, as well as roles in “Lovely Molly”, “Trekoff: The Motion Picture”, the upcoming grindhouse thriller “You’re F@#k’n Dead!”, and more! Daniel’s motto is “it’s the squeaky wheel that gets the grease”, and that has served him well as he continues to make his presence known in Hollywood as one of the biggest up and coming names in voiceover. Be sure to listen for him in upcoming episodes of “Bunsen is a Beast” on Nickelodeon, and the newest season of “The Tom & Jerry Show”. For more information on Daniel please visit www.ActorDanielRoss.com, or find him across social media under the handle @ActorDanielRoss as well as IMDB.com (Daniel Ross III).

David Sobolov is the voice of Gorilla Grodd on The CW Network drama The Flash, and Drax on Marvel’s Guardians of the Galaxy animated series on Disney XD. He’s the voice of Upgrade on the new Cartoon Network series Ben 10, and Dr. Fate in Injustice 2 from WB Games. He’s the voice of Shockwave on Transformers Prime, Azmodan in Diablo III / Heroes of the Storm, and Malchezaar in Hearthstone for Blizzard Entertainment. David is the voice of The Arbiter in Halo Wars, Jul ‘Mdama in Halo 4, Terrorblade in DOTA 2, Bumble Blast and Krypt King in Skylanders, The Annihilator on Disney XD’s live action series Mighty Med, and Lobo on WB’s Young Justice and the game Injustice: Gods Among Us. David was the voice of Depth Charge on the classic Beast Wars Transformers series, Tatsurion the Unchained (aka Bob) on Kaijudo, Lt. Vasquez in Call of Duty 4: Modern Warfare, Dr. Garret Bryson in Mass Effect 3, Robocop in Robocop Alpha Commando, Lord Tyger on Spider-Man Unlimited, and Spookie Jar on Sabrina: The Animated Series.
His face and voice were featured in the performance capture role of Rios in Army of Two: The Devil’s Cartel for EA, and in the motion picture Sparks. You’ll hear David speaking German in the first Call of Duty game, Klingon in Star Trek Into Darkness, English as the Gorn on Star Trek Enterprise and as both a Gorn and Klingon characters in Star Trek Online. David studied acting with the legendary Sanford Meisner and Richard Pinter at the Neighborhood Playhouse in New York. To learn more about David, please visit sobolov.com or on IMDB (David Sobolov).

Come learn from the top players in the industry!

Please contact Artistic Director, Sarah Scheiner at sarahscheiner [at] gmail.com or 540-229-1991 with any additional questions, requests, or concerns.

Are there ID or minimum age requirements to enter the event?

Yes. The minimum age requirement for the Industry Panel on Friday April, 28th will be for guests aged 10 and up. The Youth Voiceover Workshop on Saturday April 29th is for talent aged 10-17 years. The following two Adult Voiceover Workshops on the afternoon of Saturday, April 29th and morning of Sunday, April 30th are geared toward talent aged 18 and up. Please bring photo ID to obtain your tickets.

What are my transportation/parking options for getting to and from the event?

There is both self parking and valet available at the hotel. Pricing varies for both. Street parking is also available. The nearest metro is located at Union Station on the Red Line, and is only a few blocks away from the hotel.

What can I bring into the event?

Can I take photos with/obtain signatures from the guest artists?

There will be a designated time at the end of both the panel and the workshops where you will be able to do this. Books, posters, and other promotional items will come at an additional charge. However, self-brought items for signatures and pictures will be complementary. Please wait until we advise you that it is acceptable to ask for a photograph or signature. This will help keep our event on schedule, and as a result will provide adequate time to meet our special guests at the end.

How can I contact the organizer with any questions?

We will be operating on a 48-hour cancellation policy. Notice of cancellation less than 24 hours before event(s) will result in a 50% refund of ticket cost. No refunds will be given the day of.

We hope to see you there!