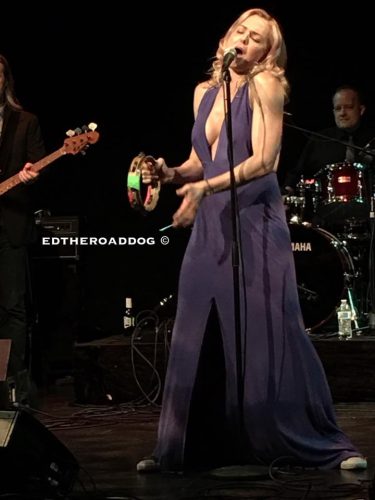 Storm Large performs with her band. Photo courtesy of her official Facebook page.

“I make music out of the voices in my mind.” This lyric compellingly represents the eclectic career of Storm Large, who certainly loomed large on stage this past weekend at AMP Strathmore.

Storm Large’s career is almost as distinctive and unique as her name; she has performed all over the world and sings in multiple languages. She is perhaps best known from her appearance on CBS’s Rockstar: Supernova reality show in 2006 and her collaboration with the multi-lingual band Pink Martini. When she took the stage at AMP Strathmore, in an amazing slinky black dress, she jokingly wished the audience “good morning,” as she had just returned from touring in Europe. However, you would never have known that the person who was about to perform for the next 90 minutes was anything but at top form. Part rock show, part stand-up comedy with a dash of self-actualization thrown in, Storm Large is truly a tour-de-force performer.

She began the show by sharing the theme – love songs. But she told us not to expect “standards,” but more classics with her distinctive twist. “A standard is forever, but so are a lot of things that suck,” she said wryly. As the sun cast shadows through the window walls onto her ukulele, Storm chatted with the audience as she settled into her set. Her opening song was fan favorite “Call Me Crazy,” which acts as a kind of personal introduction to both her music and personality.

An early standout was a minor-keyed rendition of Cole Porter’s “I’ve Got You Under My Skin.” It was reminiscent of “Uninvited” by Alanis Morisette, in that sometimes love is not always a pleasant or happy state of affairs. This version appears on her latest album, Le Bonheur. She switched effortlessly from rock goddess to sultry chanteuse, performing “Ne me quitte pas (Don’t Leave Me.) The ease with which she switched musical styles and adapted her voice so deftly amazed this reviewer. She sang with the pureness of a Broadway star and then growled into the mic in turns, both with equal vigor and success.

After a quick break, Storm and her band took the stage again under the fairy lights to continue the amazing mix of unique covers and original material, including her takes on “Nothing Compares to You,” “Bold as Love” and “Sacred Love.” She also shared her own work, which was as varied as a ballad from a musical that she is developing about two Chicago madams (“Good Girl,) to crowd favorite “Eight Miles Wide.” She also was very frank about her past struggles with drug addiction and shared the song that she wrote to reflect the moment where she almost OD’d and decided to turn her life around. She ended the evening with the song she wrote for the cause of marriage equality, “Stand Up for Me.”

Before going to the show at AMP Strathmore, I had never heard of Ms. Large before and had no idea what to expect. I left being incredibly impressed and absolutely flabbergasted that Storm Large is not a household name. Her talent is incredible and she is indescribably dynamic when on stage – she sings with her whole body. It is a rare person who actually sounds better live than recorded, and Storm Large is no slouch in a recording. The intimate atmosphere of the venue worked in her favor, as she made the audience feel like friends. Her band was perfectly in synch to her edgy style and was able to navigate the wide array of styles and genres. Her crass language and brutal honesty only made her more endearing. She also waited after the show and met with every fan and signed copies of her latest album. If Storm rolls into a town near you, I would highly recommend catching her show.

Advisory: Storm Large’s shows are full of adult language and content, so it’s not recommended for anyone under 18.