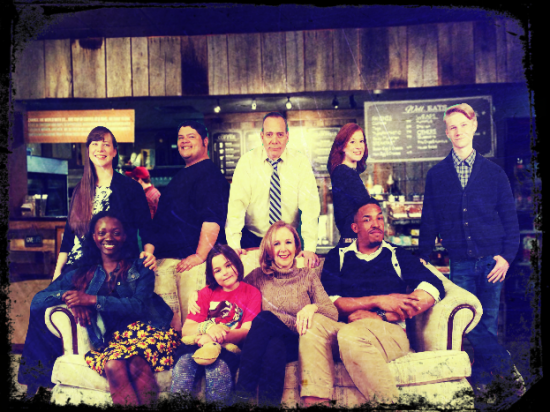 Everybody loves a good drama, especially if it’s someone else’s. “Dear Friends,” the angst-ridden play by Reginald Rose, is one of those dramas that is chock-full of lofty ideas about marriage, friendships, commitment, love, and betrayal.  It is so full that the issues frequently trip over each other, which is not necessarily a bad thing, but not always a good one either.  In the production mounted by the Just Off Broadway theatre company, Rose’s over-stuffed play is given a good dusting-off and a sprucing-up, though not without some missteps.  There’s a lot to recommend this outing (and I do mean outing).

Director Patrick Jay Golden is a lovely fellow, with some fairly lofty ideas of his own about the theatre scene in Baltimore that I hope come to fruition. He’d like to give the opportunity to fledgling actors, directors and others to practice their craft on Just Off Broadway’s stages, which goodness knows we could all use more of around here.  He’s obviously not afraid to put his own spin on a script, and for the most part, that ambition serves him well this time out.

“Dear Friends” is the story of four couples, all good friends.  One couple is in the middle of a separation and the other three couples decide to stage an intervention of sorts, trying to coax them back together.  Rose wrote this piece in the ‘60s, and it shows its age in some of the speeches.  Where Golden makes use of his vision is that he’s made one of the couples gay, one of them lesbian, and both of those couples are interracial.  Even more impressive is the fact that none of this diversity made a bit of difference, except for some clumsy dialogue issues with pronouns.  The action is well blocked and the scenes are most often well-paced (though there were a couple of sections that could have been sped up.)

There’s a lot to recommend this outing (and I do mean outing).

Golden and Jason Crawford managed to transform a stage in a church basement into a fairly spacious set, with the area in front of the stage doing multiple duties as by turns a hotel room, a terrace, and a dining room.  The set pieces are heavy and substantial and while they made for some clunky scene changes, the wait was probably worth the effect.  The cast is credited with costuming themselves and their choices worked well for the characters.  Lighting was done nicely, but there was one instance at the end of a scene where the lights began to gradually dim and the actors were forced to speed up the dialogue to get it all in before being plunged into darkness.  That made me giggle but it’s an easy fix.

The subject matter is universally relatable.  Everyone has friends, right?  And we think we know our friends – to varying degrees, of course – pretty well.  But let’s face it; all G-d’s chilluns got secrets.  Rose exposes the unsavory underbelly of these relationships on display on two levels; first, in the way the couples relate to each other as couples and also what is secretly going on between the spouses.

The evening unfolds in the living room of the gay couple, Sal and Douglas.  Three other couples, long-time friends, are invited for a typical evening around the cocktail hour.  What one of the couples doesn’t know is that the evening has been planned for their benefit – a terribly misguided effort to bring the unsuspecting couple back together after a trial separation.

Sal, played by Emmanuel Vickers, is tall, dark and handsome and well suited to his part. He has a practiced eye-roll that should be patented.  And in his scene where he reveals a dark truth out of spite and frustration, his delivery is excellent.  As his exceptionally accepting spouse, Douglas, Brad Angst is tightly wrapped and buttoned-downed.  Both actors stay in top form from start to finish, despite some missteps with the dialogue in reference to gender.  When Douglas refers to Sal as his ‘wife,’ it would have been better had he said just called him, ‘Sal.’

As the couple on the verge of splitting up, Tracy Dye as Lois and Jason Crawford as Michael give pitch-perfect performances.  They visually evolve from a couple who barely speak to each other to the ones who may or may not make it together but learn to treat each other with respect and genuine concern. Both actors are top-notch but Dye, in particular, can show emotion with a depth and range that rises above the material.

As the lesbian couple, Gigi (Sarah O’Hara) and Vivian (India Palmer), have the sweetest relationship of the four.  O’Hara is not quite as believable in the character but that is largely due to the writing.  And the chemistry she shares with Ms. Palmer is honest and engaging.  Palmer is a little ray of sunshine, except when she’s in defense mode. She can dish it out with the best of them when riled. Both actors are up to the task at hand and very satisfying to watch.

As the couple with the most secrets per household, Lenny and Charlotte (Tom Piccin and Penny Nichols) are terrific.  Piccin’s Lenny is a bombastic bully and Penny Nichols infuses Charlotte with a skill level that is riveting.  Rose’s dialogue is never better than in the scene where we learn just how much each of them has to hide.  Charlotte endures her marriage because she doesn’t know any other way to live, though through her alcohol induced haze she reveals the depth of her resentment of the others.  Lenny hides his philandering not nearly as well as he thinks, and Piccin shows his real acting chops in the scenes where he’s outed.  Literally, in this case.

Playwright Rose explored themes in Dear Friends, written in the 60s, that are as relevant today, though we’d all like to think we’re just a little more evolved than these people.  Like the song says, “I’ll be there for you, you’ll be there for me, too.” In some cases, that can be a hard reach.