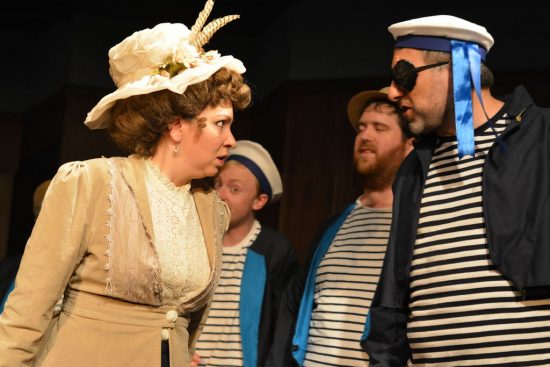 Gilbert and Sullivan’s sarcasm for British hierarchy is evident in the comic operetta “H.M.S. Pinafore” now playing through May 21st at Laurel Mill Playhouse. Located in the charming town of Laurel in a 100-year-old renovated historic building, this theatre is one of the more intimate performance spaces in the area. They have been bringing great productions to the community for over 35 years.

Directed by Michael Hartsfield and produced by Maureen Rogers, this diverse cast shares their many gifts, bringing energy and vitality, humor and grace to the stage. Costume designers McGugan, Cartmell and Keller dress gender neutral striped navy garb, easy to move and dance in, while the ladies are dressed colorfully appropriate for well-bred damsels. This production seems to have hit the talent lottery with Michael Hartsfield who not only directed the production, he also was set designer, sound designer, light designer, construction and painting. Under the musical direction of Mimi Kuhn McGinnis, this cast knows and enunciates every word. BRAVO!

…this diverse cast shares their many gifts, bringing energy and vitality, humor and grace to the stage.

Her Majesty’s Ship Pinafore is a hilarious love story between a high-born Captain’s daughter, Josephine, a challenging character for even the most sprite sopranos, is met with the charm, poise and talent of Tania Rosa Bindhoff-Frieswyk. Playing her true love is the handsome able seaman, Ralph Rackshaw, sung with amazing clarity and diction, by Gary Eurice. Considering that he is sadly from the working class, all who know him think he is the smartest and most handsome crewman, although he obviously just wretched swab.

Little Buttercup, played by Emma Jensen, has a strong and sweet voice as she sings “I’m Called Little Buttercup,” which is how we learn that she has crush on the captain. Due to her lowly stature, our show is brought into the 21st century as kind Captain Corcoran reminds Buttercup that their love can never be but, they can “stay in the friend zone!” Captain Corcoran, played by Matthew Frieswick, has a commanding baritone voice, impeccable diction, and stature that demands respect of the boatswain and sings to his crew about his abilities, that he never curses or is sick at sea, never… well hardly ever. And while the good Captain terrifies most of his crew, his daughter is not convinced that her betrothal to someone of great breeding will bring her happiness.

Dick Deadeye, played by the scene stealing, Jeff Dunne goes out of his way to try to help Ralph Rickshaw off on the boat as Ralph believes living without his love isn’t worth living. Deadeye thinks this an excellent idea and goes about bringing one item after another that will help with the deed. Mr. Dunne is a talented comedic actor that brings levity to situations that sea-saws from comedy to tragedy (not really) and back again. One senses from reading Mr. Dunne’s lengthy bio in the program that he is capricious both on and off stage and that this character was written for him!

Sir Joseph Porter, played by Gene Valendo, a seasoned actor, sings the patter song, “When I Was a Lad,” that has given Gilbert and Sullivan their trademark sound. He admits that it is only an accident of birth that he has been given his title. The song sets the tone for the theme of many Gilbert and Sullivan productions: class equalization. The good “First Lord of the Admiralty” states that he got where is he is in life from polishing handles and having good penmanship to become “Ruler of the Queen’s Navy!” Sir Joseph is kind and respected but Josephine takes his banter to mean that she should be able to marry who she wants. Josephine says, “He is a great man. He told me so himself!”

Like most of Gilbert and Sullivan productions, “H.M.S. Pinafore” is a delightful show that is seemingly simple, but has many complex themes regarding love, honor, class, and humility.

“H.M.S. Pinafore” plays through through May 21st at Laurel Mill Playhouse in Laurel, MD. For more information, visit here.