Theatre Review: ‘James and the Giant Peach, Jr.’ at Children’s Theatre of Annapolis 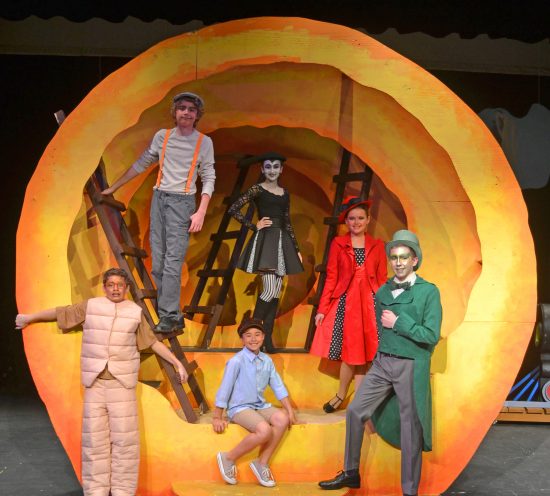 Cast of “James and the Giant Peach, Jr.” presented by the Children’s Theatre of Annapolis.

Expect a toe-tapping, head-bobbing, happy good time during the magical production of “James and the Giant Peach, Jr.” presented by the Children’s Theatre of Annapolis. The young cast members possess talent beyond their years and do a fine job of bringing the vision of Director Holly Noelle Baca, Musical Director Michelle Harmon Bruno and Choreographer Jason Kimmell to life in this energetic musical inspired by the classic book from beloved British writer Roald Dahl.

The lively opening number “Right Before Your Eyes” sets the tone for a grand adventure as the mysterious Ladahlord played by charismatic Drew Sharpe, James played by adorable Anya Lengbeyer, and the rest of the gang dance, clap and twirl, immediately putting anyone in the audience in a good mood. The colorful set design and costumes throughout the show also complement the delightful experience.

Along with being highly entertaining, “James and the Giant Peach, Jr.” teaches lessons of family, friendship and growth. As orphan James embarks on a journey of self-discovery, he meets his no good, conniving aunts, Spider and Sponge, played by the hilarious sidekicks Teaghan McLaughlin and Bethany Yamaner, before encountering a new crew of interesting insects as they set off across the Atlantic aboard a gigantic peach.

Notable performances include the early solo by James “On Your Way Home” that Lengbeyer sings with beauty and maturity. On the other end of the spectrum, the over-the-top “There’s Money on That Tree” is a campy company effort complete with roving reporters, bumbling cops and Spider and Sponge trying to make the most out of their newly discovered peach of epic proportions. The Latin-driven “Plump and Juicy” sees the nervous Earthworm played by Liam O’Toole overcome his shyness as he dances and sings with the seagulls who eventually transport James, Ladybug, Grasshopper, Spider and Centipede and the peach high above the clouds to the skyscrapers of New York City.

“Welcome Home” brilliantly brings it all in as James and his new ‘family’ happily sing ‘Just look at where we are, we’ve come very far together.’

“James and the Giant Peach, Jr.” runs through Sunday, May 7 at the Children’s Theatre of Annapolis complex in Bay Head Park. Information about this show and upcoming productions is available here.