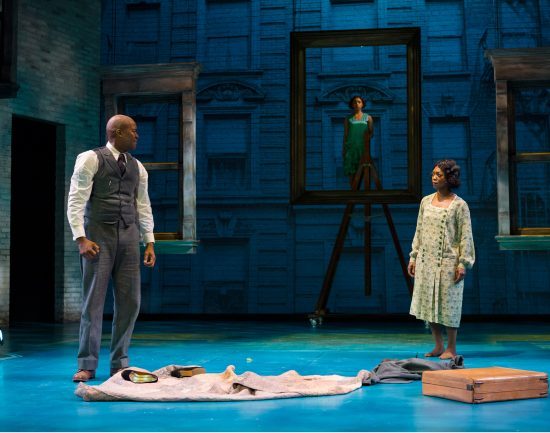 “I am the name of the sound and the sound of the name. I am the sign of the letter and the designation of the division.” This quote pulled from “The Nag Hammadi” is the epigraph that sits between the first few pages of Toni Morrison’s beloved novel, “Jazz.” And rightfully so. The quote mirrors the definition of the rebelliously inconsistent music we call Jazz and all its contradictions. As I found myself turning the pages of Toni Morrison’s highly descriptive, bouncy, and melodic novel filled with characters jumping from note to note in the unending paradox that is their lives, I wondered how exactly they were going to turn such a deliberately free flowing body of work into a play.

The stage play “Jazz” by Toni Morrison, adapted by Nambi E. Kelley, and directed by Kwame Kwei-Armah received its world premiere on May 26th at the Baltimore Center Stage. I am certain that it was not a simple task to turn an over 200-page novel into a one-act play and although Kelley does an excellent job fusing the dialogue and the highly descriptive narration of Toni Morrison’s voice, if you read the book the play left a smidgen of something to be desired. However,  Kwame Kwei-Armah kept us engaged and honored Toni’s rhythm with a theatrical pace resembling the dance once called the jitterbug.

“Jazz” is truly a good time.

At first glance, I’d like to call it a love story, but the more I sit with it, the more I thought of it as a story about the absence of love. The absence of self-love, a mother’s love, and a clear understanding of love.

Set in Harlem, amidst the years of the great migrations, when Black Americans were emerging from Southern towns in search of financial stability and employment in the North, “Jazz” introduces us to the brokenhearted and mentally disturbed Violet, (Shanesia Davis) her guilt plagued husband Joe Trace, (Leon Addison Brown) and their obsession with his dead 18-year-old mistress Dorcas (Jasmine Batchelor) who died at his hands. As we track Violet’s obsession with Dorcas and her unrelenting insecurities due to Joe’s unfaithfulness and unspeakable violence, she experiences a psychotic breakdown that was already well on its way. Actor Shanesia Davis does an outstanding job capturing Violet’s personal confusion and the underlined self-loathing as she goes throughout Harlem asking Dorcas’ school teachers, friends, and relatives questions about the young woman who stole her husband’s heart. She even takes the information she learns about her and mimics it, trying her hardest to capture that essence her husband seemed to love so much. It is somewhat emotionally tiring to watch her juggle between a dangerous jealousy and a heartfelt admiration for the young girl.  She even goes so far as to harass the dead girl’s aunt who out of pity offers Violet a picture of her. Violet then decides to place it on her mantle at home so that both she and her husband can see Dorcas’ face every day.

“Her face is calm, generous and sweet. But if the tiptoer is Violet the photograph is not that at all. The girl’s face looks greedy, haughty and very lazy. The cream-at-the-top-of-the-milkpail face of someone who will never work for anything; someone who picks up things lying on other people’s dressers and is not embarrassed when found out. It is the face of the sneak who glides over to your sink to rinse the fork you have laid by her plate. An inward face— whatever it sees is its own self. You are there, it says, because I am looking at you. “-Toni Morrison

Joe, on the other hand, sits on the other end of this unstable journey, frozen with guilt and reminiscing on secrets of his motherless past. Actor Leon Addison Brown’s subtle exploration of subtext gives us undertones of why such a seemingly gentle man would commit such a heinous crime.  Dorcas however,  floats about the stage and story line in a ghost like fashion shading light on the affair that started the haunting reality that plagues this couple to no end. She never actually leaves the stage and is there in one way or another. Her youth, naivety, free spirit, and love for Jazz is the very thing that creates what at first seems to be a genuine love between her and Joe. However, those same characteristics are the very reason why Joe wanted her dead. Batchelor’s portrayal of Dorcas is contagious in a way that if you get really close to her you hope that some of her youthful energy will rub off on you. But we’d soon find out that this youngster isn’t much at all like the picture that Violet would paint her out to be.

As the story continued to develop, so did the set designed by Tim Mackabee. As this incredibly talented ensemble assembled and reassembled the stage to accommodate the swift scene changes, the set transformed smoothly from one reality to the next. To add to the portable set, the virtual backdrop designed by projection designer Alex Basco Koch offered us a lifelike experience as we traveled back and forth between time and distance.

“Jazz” is truly a good time. If you’re a Toni Morrison fan, you’ll be happy to meet the characters that she brought to life in your imagination and if you’re not familiar with the writers work,  I’m certain this production will make a delightful introduction.