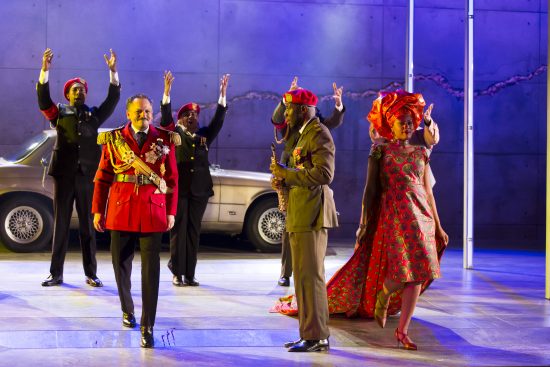 Photo of the cast of “Macbeth.” Photo by Scott Suchman.

Perhaps more so than any of Shakespeare’s other dramas, “Macbeth” is as relevant today as it was when it was first performed. The Shakespeare Theatre Company’s production of the play proves this by focusing on the effect of power and placing Macbeth and his wife in a unique setting.

“Macbeth” is the story of the eponymous general who receives a prophecy that he will one day become king. The idea of gaining power slowly consumes Macbeth, as well as his wife, and causes him to commit unthinkable acts, all in the name of power.

Though the original play is set in Scotland, this production of “Macbeth,” directed by Liesl Tommy, takes its inspiration from Africa. With elaborate costumes and headdresses, as well as African-inspired music, this version of “Macbeth” has taken a very different and interesting turn.

Despite its uniqueness, the setting did not feel forced or out of place. The characters fit right in in Africa, just as they would in Scotland or anywhere else.

Placing “Macbeth” in Africa showed the timelessness of the story and the universality of political ambition. No matter what time period or country, there will always be people who seek power for power’s sake.

Jesse J. Perez as Macbeth led the cast with a powerful performance. He embodied the character wholly and portrayed his struggle with ambition and power transparently. Perez played equally Macbeth’s many sides, from his beginnings as the kind and humble general to the end as a power-hungry ruler.

Placing “Macbeth” in Africa showed the timelessness of the story and the universality of political ambition.

Where Perez truly shined was alongside his costar Nikkole Salter as Lady Macbeth. The pair displayed true chemistry and their scenes together were the highlight of the play. When the couple meets in the dark hours of a fateful night, a pivotal scene in the play, their energy together was electric.

Salter also shined in her role. She gave a softness and vulnerability to Lady Macbeth when it would be easy to villainize her. In this way, Salter showed the character’s layers and allowed the audience to empathize with her.

My favorite scene of the play brought together all of the best elements – the setting, the music and the leads’ chemistry. When Macbeth and Lady Macbeth make their first entrance as king and queen, there is no dialogue. Instead, the cast sings and dances as Perez and Salter stride down to the front of the stage.

Salter’s costume in this scene was also a standout. The combination of the dress, cape and elaborate headdress radiated regality. Perez’s traditional dress complimented this perfectly.

Though the concept of the play was successful, there was one element that stuck out for me. The witches in this version were not the traditional witches. Instead, the three “weird sisters,” played by David Bishins, Tim Getman and Naomi Jacobson, were more allegorical characters, dressed in sleek business wear and military garb and represented Western influence.

While I understood this decision, the witches do not transcend time periods and settings as easily as the rest of the play. This version of the witches lead to some comedic moments that were not intended for humor. Some of their lines, specifically the lines about the ingredients in their cauldron, did not quite make sense in this context.

Overall, this production of “Macbeth” proved to be a relevant piece of theater that will surely resonate with today’s political climate.

Running Time: 2 hours and 50 minutes with a 15-minute intermission.

“Macbeth” plays through May 28 at Sidney Harman Hall in Washington, DC. For more information, click here.