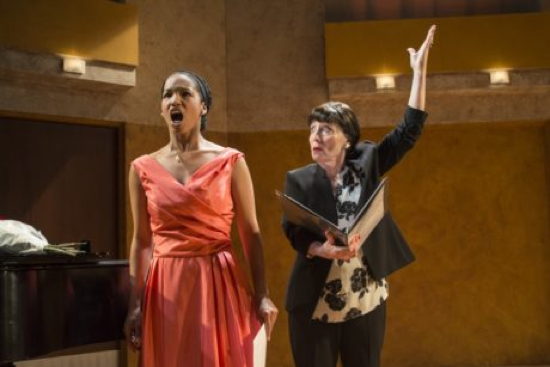 Before Patti Lupone took on the role of Maria Callas in Terrence McNally’s “Master Class,” the New York Times hailed it as “actor proof.”  However, as “art is domination” is La Divina’s motto, the play left Broadway and has gone on to have a terrific regional career. MetroStage’s production, directed by Nick Olcott, proves the New York Times wrong time and time again.

The play is a fictional master class held by world renowned opera singer Maria Callas, now in the “twilight years” of her career, as students come in to get critiques, she lapses into lyrical (no pun intended) daydreams of her former days.

This is a play not only for opera lovers but for anyone who calls themselves an artist.

DC favorite Ilona Dulaski commands the stage as Maria Callas. Dulaski reaches through the fourth wall to the audience, almost claiming them as extensions of the character’s own mind and uses their energy to empower her own performance. She is absolutely riveting to watch especially when she steals the spotlight and takes us back to her younger days.

You’d think that with a presence as commanding as Callas/Dulaski it would be a feat for the other actors to engage her. Not at all! The play is so well wrought, and the actors are so in tune that from lights down to lights up I wasi glued to my seat.

Joseph Walsh is Emmanuel or Manny, the Accompanist, and pulls double duty as the music director of the show. Manny convalesces to the diva’s monumental personality in a way that makes him an instant audience favorite, while his counterpart, The Stagehand, played by Metro Stage veteran Michael Sharp, is comically immune to her graces.

For this musically courageous show, Metro Stage enlisted the help of three incredibly talented young opera stars. They amaze just as much in their musical transformations as Dukaski does in her character’s transformation. Emily Honzel is a first-year graduate student in the Maryland Opera Studio and plays the overly confident First Soprano (which may be a bit of an oxymoron). Honzel’s voice is beautiful and transcendent despite Callas’ frequent interruptions.

“God save us sopranos from you tenors,” says Calls to tenor Tony, played by CUA graduate, Daniel Noone. Noone is the picture of the ambitious Tenor and holds his own against the formidable Dukaski, equally as well as Tony holds his own against Callas. His song is beautiful and takes you right to the gorgeous halls of the church that Callas describes.

Last seen in Metro Stage’s critically acclaimed Blackberry Daze as Carrie, Ayana Reed plays the nervous but immensely talented Second Soprano, Sharon. Reed is deftly funny in the role, but her singing is phenomenal. There are truly no words to describe the experience it is to listen to Reed’s Lady Macbeth.  Except maybe “Audra McDonald, who”?

The incredible lighting and projecting effects were designed by Alexander Keen, now in his fifth season designing lights for MetroStage. The costume design, including the now infamous pink dress is designed by Jingwei Dai, a second-year MFA student at George Washington University. His designs include MetroStage’s “Fully Committed.”