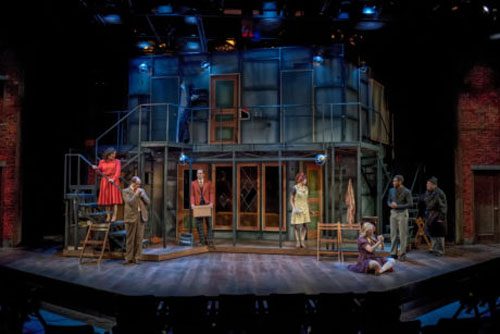 The Everyman Theatre is capping off one of the best seasons yet by bringing together its family of company members (with lovely plus one – Emily Kester in her Everyman debut) to present this hilarious love letter to the stage. It is a must for theater lovers and anyone who has ever participated in a theatrical production. The 1980s award-winning British farce “Noises Off,” written by Michal Frayn, is a perfect vehicle to showcase the talents of this company. Comedy is hard and, in this case, sometimes brutal. and this is probably one of the most physically challenging and fast-paced shows ever written. You will have to see it more than once because of all the bits you might have missed, especially in the side-splitting second act – 152 in all according to Artistic Director Vincent M. Lancisi as he lovingly directs his supremely gifted cast. In anticipation of what this company could do with this beloved comedy, Everyman experienced the biggest advanced ticket sales in its history. You will never laugh so hard in your life or have so much fun at the theatre.

You will never laugh so hard in your life or have so much fun at the theatre.

The play-within-a-play focuses on a troupe of second rate actors presenting a mediocre play, “Nothing On.” We are never sure what it is really about as we never see them get past the first act, but it includes attempts at sexual liaisons, tax evasion, a burglar, a sheik and plates of sardines. (“Nothing On” even has its own fake program replete with humorous ads and bios of the actors.) The first setting is the late night/early morning dress rehearsal before the show’s opening; the second act is presented from the viewpoint of backstage during a matinee when all the actors’ personal drama sets off chaos on and off stage; and finally we are the audience for the final show as the cast is literally staggering to the finish line at the end of its tour – and everything falls hilariously apart. This requires a massive set change and two intermissions for which the set crew received applause for pulling it off seamlessly.

Expecting nothing less, the entire artistic team for “Noises Off” does an incredible job with fine attention to detail. By setting this production in the 1970s at the suggestion of the costume designer Eric Abele, he, along with resident set designer Daniel Ettinger and resident lighting designer Jay Herzog, turn tacky into a high art form. They utilize the bright colors and patterns, bad fashion (oh the plaids!) and décor that marked the era as well as the technical flubs caused by backstage mayhem. The set is a technical marvel of doors that must open – or not open – banisters, door knobs and glass windows that malfunction – all on cue.

The ensemble includes Deborah Hazlett (Dotty Otley as Mrs. Clackett), Carl Schurr (as the director Lloyd Dallas), Danny Gavigan (Garry Lejeune as Roger Tramplemain), Emily Kester (Brooke Ashton as Vicki), Megan Anderson (Poppy Norton-Taylor as the assistant stage manager), Bruce Randolph Nelson (Frederick Fellowes as Philip Brent), Beth Hylton (Belinda Blair as Flavia Brent), Eric Berryman (Tim Allgood as company/stage manager), and Wil Love (Selsdon Mowbray as the Burglar). With the aid of dialect coach Gary Logan, the company shows proficiency in not one but sometimes two British dialects – as the actors and the characters they play in “Nothing On.” The Everyman company is what we have come to expect – extraordinarily skilled artists with perfect timing, tireless energy – and mastery of slapstick.

Dotty is the main investor and headliner in the company. She is having a relationship with the much younger (and slightly dim) Garry. His jealousy causes much of the insanity behind the scenes in the second act. The seasoned director, Lloyd, is juggling an affair with the mousey assistant stage manager, Poppy, AND the beautiful and clueless Vicky who spends most of the play in her pink undergarments and losing her contact lens. Tim is the beleaguered company/stage manager who also must be ready to step for the slightly deaf and dotty veteran actor, Selsdon, who no one is sure will show up because of his fondness for drink. Belinda is the peacemaker of the group and Frederick is subject to nosebleeds at even the mention of violence. While each of the actors is amazing, Bruce Randolph Nelson as Frederick is so marvelously over the top that it is no wonder that fellow actor Deborah Hazlett cites (Q&A with the Cast of Everyman Theatre’s ‘Noises Off’) Nelson as the only actor who can make her laugh on stage and break character. In her words, he is a joy to watch.

Everyman continues to soar to new heights and “Noises Off” is the perfect ending to another marvelous season. Just when you think this company can’t get any better, they continue to surprise and delight. Baltimore is so fortunate to have such a gift in this theater company. Get your tickets soon before they sell out!