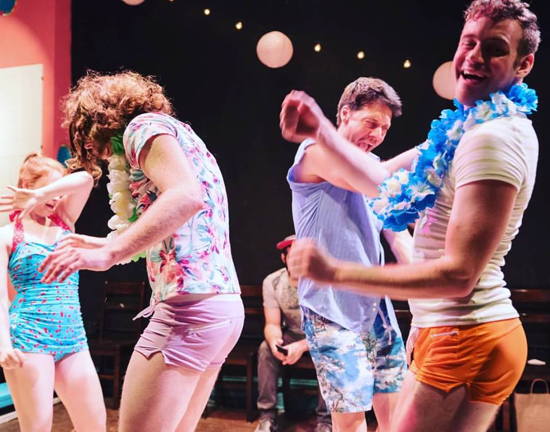 Aint no party like a  Psycho Beach Party, because Stillpointe Theatre’s production of “Psycho Beach Party” written by Charles Busch and directed by Courtney Proctor is highly entertaining and ridiculously funny. This Stillpointe Theatre production definitely rattled my funny bone, and after a long day full of ups and downs, highs and lows, it was just the laugh I needed.

From the moment I walked into the theatre, I was immediately drawn in by the set, or should I say performance space, designed by Ryan Haase. Hasse’s choice of bright pinks, blues, and yellows drowned the set that stretched throughout the entire theatre.  The blue curtains that hung in the area I’d like to call down stage, resembled deep ocean waves as surfboards hovered above them.  The entire space felt like we were at a picnic along the beach. These choices, paired with the way the audience seating was arranged, with two rows facing each other, sort of made us all members of the cast. We were all on this beach together. It’s just that some of us forgot to bring our bathing suits. But, the cast certainly didn’t forget theirs. Costume designer, Nick Staigerwald, got the 1960s beachwear just right. It was like stepping out of a time machine as I watched a school of surfer boys in tight, tiny, and brightly colored swimming trunks and a tanning party of ladies in polka dotted bathing suits, flood the performance space.

With all that well-sorted spectacle capturing my attention, I was fully involved as I watched this far from ordinary tale unfold.  This is the story of the Skinny-legged Chicklet Forrest (Christine Demuth), a seemingly innocent but extremely psychotic, teenage beach babe who desperately wants to learn to surf so that she can ‘cool the curls’ and impress her beach bumming crush, Star Cat (Andy Fleming). Unfortunately, though, he’s currently dating her voluptuous, catty, and gold digger-ish frenemy,  Marvel Anne (Jess Rivera).  Amidst her intentions to win him over, visits from the multiple personalities that plague her psyche seem to get in the way of  her agenda and disrupt beach life for many of her friends, all except for Kanaka, (John Benoit) the eldest of the beach boys and the one who discovers her multiple personality disorder (MPD) first but doesn’t spill the beans because he seems to have a thing for bondage, shall we say.

Chicklet’s alters are extremely different from one another and Christine Demuth seems to effortlessly jump from one to the other. Like musical notes she moves from Tylene, a Safeway checker; to Steve, a male model; to a radio personality named Dr. Rose Mayer;  to the accounting firm of Edelman and Edelman; and let’s not forget Kanaka’s favorite, Ann Bowman the hardcore dominatrix. With so many alters it’s safe to say that most of her beach buds have no clue who she really is. This includes her clingy best friend, Beroine,  (June Keating)  who happens to be a melodramatic journal writer, whose diary I would willing read each page of.

As we watch Chicklet’s story develop, we realize that there is much more to Cricket’s personality disorder than what meets the eye and soon find out that the apple doesn’t fall too far from the tree when we observe Chicklet’s also seemingly innocent mother, Mrs. Forrest, (Kathryn Falcone) beat her with a currently vintage jockstrap, that she apparently just walks around with already inside of her bra.

There is, in my opinion, no greater feeling than when tears run down my face from laughter, and Christine Demuth’s nothing short of a brilliant portrayal of Chicklet and the rest of this seriously well cast production made that happen last night. This ensemble rocks and completely owns comedic timing. They left me gasping for air and laughing in my sleep at the end of the day.  All I can say is Bravo!

Running Time: 75 minutes, with no intermission.

“Psycho Beach Party” plays through June 18, 2017, at the Mercury Theatre, 1823 N. Charles Street, in Baltimore, MD. For tickets, go to the box office, or purchase them online.