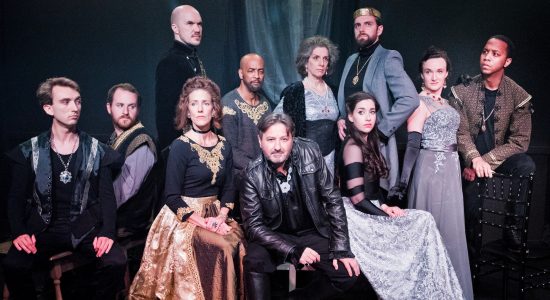 The cast of Richard III at Annapolis Shakespeare Company. Photo by Joshua McKerrow.

Deception and death loom large in “Richard III,” William Shakespeare’s thrilling historical drama artfully performed by the Annapolis Shakespeare Company (ASC). The edgy and stylish production directed by Donald Hicken follows the frightening ascent and psychological descent–of Richard, the Duke of Gloucester, in his relentless pursuit to be crowned the King of England.

…the ASC production of “Richard III” is accessible, alluring and definitely worth seeing this season.

While the rest of the House of York celebrates at the start, Richard, brilliantly played by a convincing and cunning Kurt Elftmann, casts himself as a sad outsider. Brooding, he laments his lot in life, deformed body and inability to woo women, warranting pity–albeit briefly–before revealing sinister plans to remove anyone in the way to the throne, relative or not.

What makes Elftmann especially intriguing to watch as Richard is his deft ability to show the extreme nature of his character, feigning loyalty to family members in one instant, then muttering in snarky disgust about them the next. At other times, he makes it hard not to laugh at Richard’s ridiculousness, such as when he attempts to convince others that he is a pious and devout reader of the Bible in a subsequent scene.

Other members of the company are equally enthralling. Dexter Hamlett who plays George, the Duke of Clarence, Richard’s doomed brother, does a fine job of exuding naivete and loyalty toward Richard, and later, raw emotion and disappointment in the afterlife. Olivia Ercolano as Lady Anne draws the audience in her state of mourning and despair. Sue Struve who plays Queen Margaret is haunting as she passionately curses the wrongdoings of Richard and his clan in a tense scene that leaves everyone aghast. Lauryn Rocklyn as Queen Elizabeth is a skillful negotiator and holds her own when verbally sparring with Richard. Brian Keith MacDonald as the Duke of Buckingham is excellent as the dutiful right-hand man to Richard, before being brushed aside in the ultimate betrayal.

Despite being set in the late 15th century, ASC’s “Richard III” has a contemporary feel to it with its sensory, scene and style choices. ASC Artistic Director Sally Boyett, who serves as Sound Designer in this production, creates anticipation and suspense with precise audio effects such as menacing, pounding drums. Scenic Designer Jack Golden adds to the intimate ambiance with a minimalist approach, while Lighting Designer Adam Mendelson disrupts the darkness with a striking battle scene. Costume Designer Sandra Spence weaves leather, camouflage, brocade, and silver and gold accents, with tailored jackets and elegant dresses for a polished, regal look.

Whether you are a fan of Shakespeare’s work or not, the ASC production of “Richard III” is accessible, alluring and definitely worth seeing this season.

Running Time: 2 hours and 30 minutes with a 15-minute intermission.