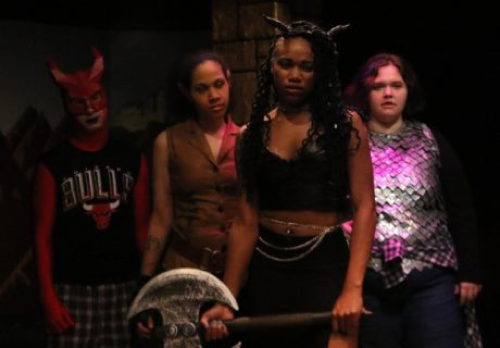 Spotlighters Theatre is remaining true to form with its latest offering, “She Kills Monsters,” running weekends now through June 18th.  Spots is well known for putting on well-known plays that make you wonder, ‘how the heck did they get that great, big show on that little bit of stage?’  But they’re also just as well known for selecting pieces that you just don’t see much – anywhere.  “She Kills Monsters” manages to fall into both categories, and it’s a big, multi-character, many-layered, mostly well-done delight.

Qui Nguyen’s tale, largely based on the Dungeons and Dragons game so popular in the early days of gaming (and might still be for all I know – I’m no gamer) is all about so many things that if I explored each of the themes, this review would go on long past anybody’s interest level, especially mine.  So let’s explore the story a little first, and I’ll chime in with a few pertinent points.

“She Kills Monsters” is slaying audiences and that’s a very good thing to see.

Once upon a time in a little town called Athens, Ohio, there lived a girl named Tilly.  Tilly was really into playing a game called Dungeons and Dragons.  She was so into it, she even had a big book where she wrote her own version of the game, one that she kept secret from her family.  The game – and the book – were kind of a metaphor for how she wished her own life really was, full of warrior princesses and elves always on her side battling baddies, slaying dragons and being heroes.  Unfortunately, Tilly and most of her family are unexpectedly killed in a car accident when she’s fifteen.  The sole remaining family member is her older sister, Agnes.  Agnes, ten years older than Tilly, is a teacher at the same school Tilly attended.

Now, Tilly and Agnes were never close – in fact, Agnes has mostly ignored her weird little sister and Tilly found Agnes vapid, annoying, clueless and no friend of hers.  After Tilly’s death, Agnes finds the book and discovers that Tilly was a lot more complex that she had ever dreamed.  Wracked with guilt over having never bothered to get to know her own sister, she begins to play the game.  Ok, here’s where the play takes a real turn for the weird.  Agnes gets so immersed in the game that it literally comes to life, with Tilly as the main character and Agnes doing her best to figure out the game and way more importantly, the sister that she so desperately wishes she had known in real life. From then on, Agnes is on a journey, a veritable quest, to discover not just her sister, but her own inner strengths.

Director Stephey Miller has done a bang-up job assembling a crackerjack team of actors and technicians that she puts through their paces with the deft hand of a much more experienced ringmaster.  Alan Zemla lives up to his stellar reputation one more time with his set that implies more than immediately meets the eye, and does it very well. Hat’s off to Al Ramer for outstanding lighting. Lanoree Blake went all in on most of the costumes, though I wonder why Agnes wasn’t garbed in more battle-ready wear.  The rest of the costumes were excellent, especially the bunny slippers on the Lord of the Underworld (or whatever he was), Orca.  It did this old actor’s heart good to see those furry appendages on someone else; I wore them in Spot’s last production, “The Wiz.”  Nice to see them again.  Stephey doubled as Sound Designer, showing off a whole ‘nother skill set.  Loved hearing some songs from the mid-80s.  Kung Foo Fighting?  Perfectly fit the scene.

The entire cast did great but as usual, there were a few standouts.  Top of the list has to go to Andrea Bush’s foul-mouthed fairy, Farrah, as well as her slightly Shakespearean Narrator.  If you’ve ever read my reviews it’s no secret I hold this lady in the highest regard and this performance just proves my point.

Michael Crook as Chuck, the Dungeon Master, is a fun little furry ball of bravado.  Peter Daly as Miles, Agnes’ boyfriend, has an odd, slightly Mid-Atlantic accent, but manages to convey just the right amount of empathy when he needs to.

Sam Cure as Steve is by far my favorite nerd of the season.  Full of teenage angst and totally lacking in any social skills whatsoever, he does show a comedic aptitude for getting himself killed.

Amanda Harris’ Kaliope has a deadpan delivery that is clever and engaging.  Plus, I loved the Spock-like ears.  Very cool.  Danielle Shorts as Lillith is a black-leather-clad badass and wears the costume and the character well.  Zoe Lunga and Claire Iverson are perfect as the school and D&D world mean girls.  I wanted to smack them in either persona and that’s exactly the sentiment the characters are meant to evoke.

The real surprise to me was Tina James.  As a potty-mouthed school counselor and best friend of Agnes, she is a talented actress just waiting to happen.  Last seen at Spots in “The Wiz,” she is much better in this role.  I’m going to love watching her trajectory in roles to come.  And Stephen Edwards as Orcus displays an annoying lack of body fat and a charming slacker’s attitude as the underworld’s gatekeeper who joins the merry band of good guys out to rescue a lost soul.

Lanoree Blake plays Tilly, the dead sister who is vibrantly alive in the fevered imagination of her sister’s journey into the game.  She’s tough, vulnerable, and heartbreakingly honest and tosses off revelations into her life with a sang-froid that is gritty and real.  While it took her a scene or two to find her stride, once she found it she was able to strut with the best of them.  Big thumbs up.

It didn’t take long for Rachel Verhaaren to find that core acting strength that let the audience see just how good she is, and when she lets loose she is fierce in her commitment to the role. We were all rooting for her from the get-go. Tall, pretty, and graceful as a gazelle, and any doubts I had about whether she could play this dangerous game were pretty soon set asid because the girl can act like a hero and has a sweet strength that was always on display.

On its surface, “She Kills Monsters” is a silly bit of fluff about a girl who goes slightly off her rocker and hallucinates as though she’s had some really good illegal substance every time she plays Dungeons and Dragons.  But scratch beneath the banal surface and it’s an exceptionally well-written commentary on family, commitment, school bullying, gay identities, grief, redemption, self-awareness and ultimately acceptance.  And that is always a recipe for great theatre.  “She Kills Monsters” is slaying audiences and that’s a very good thing to see.