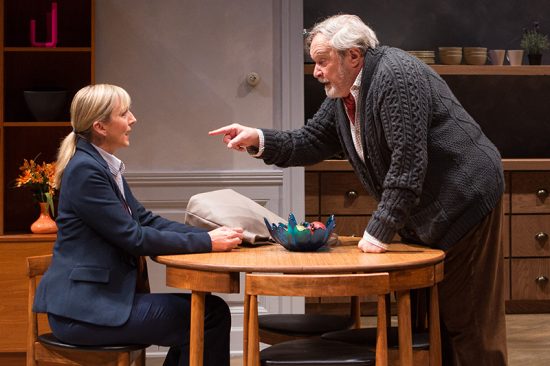 Life and everything in it is fading.  As children, we learn a harsh truth: Everyone we know will die.  That’s not morbid per se; just an unfortunate dour fact of life.  A physical reality we must accept as we grasp the concept of mortality.  The real challenge may be the harsher truth we learn later: Before everything we know and understand disappears physically, it might leave us cognitively.  As we age, our memory goes, and we remember less and less.  The world and our understanding of it gradually comes undone.  Through a compelling translation by Christopher Hampton, the intentionality of Artistic Director David Muse, and the astounding range of the incomparable Ted van Griethuysen as André, one show faces that truth hand-in-hand with us.  Studio Theatre concludes its main series 2016-17 season with French playwright Florian Zeller’s “The Father.”

André is a solitary man trying to live out the remainder of his life in the comfort of his Paris apartment.  His daughter, Anne (Kate Eastwood Norris), is attempting to set him up comfortably with a live-in aide to ensure he’s properly attended to in his old age.  André refuses, saying he just can’t trust such a person, believing the last one tried to steal his watch.  As it turns out, André cannot trust much.  Events keep happening in his life that simply don’t add up.  Anne said she had moved past her divorce and was planning to leave for London, but the next day she’s back – literally appearing as an entirely different person – she says she has been married to her husband Pierre (Manny Buckley) for some time.  Pierre claims he and Anne have owned and lived in the apartment with André leaching off them for years.  “This is my apartment, isn’t it?”  He asks his daughter repeatedly to no avail.  As his grip on reality loosens to the point where what’s subconscious and what’s real, what’s past and what’s present, are inconsistent mysteries, André sinks into paranoia.  All’s vanishing, and identities and appearances are never the same, and time seems as lost as his watch.

…a heartfelt, understandingly unsentimental witnessing of a shattering mind.

“If I didn’t lose it, I’d never recover it!” claims André.  He is referring to his treasured watch, which he forgot he had hidden in his favorite hiding place, but still uses its disappearance as justification for firing his latest aide.  To Andre, the explanation must be she moved it there on purpose.  The confidence that van Griethuysen brings to André is absolutely perfect in its layered execution.  André is the one character in “The Father” who is both most perplexed by the world yet certain of what he can discern.  We are put in his shoes the moment the show opens in the middle of a conversation.  He is our guide through his own warped perception of reality – the only character who can and does recognizes the oddities of his “surroundings,” but also doubles as an unreliable narrator.  He will demean others for faults he projects unto them and proudly boasts about himself through anecdotes that may or may not be true to accept the reality he’s inhabiting before being forced to take his next at face value.  It’s a tragic depiction of a man so resigned to his fate that he needs to reassure himself of dwindling certainties, objective or not, in order to survive his own mind.  As his moments become clearer, his greater world unravels more and we are challenged to distinguish truth and fiction, past and present, under the guidance of a man who can only put his faith in constants.  Time and space dilate and condense, but the audience is clued into just enough to comprehend the skeleton of a heartfelt, understandingly unsentimental witnessing of a shattering mind.

André’s headspace is realized through creative decisions that toy with the puzzle-like plot, most notably in the casting and production design.  While Anne and are most consistently played by Norris and Buckley, respectively, between or even during scenes, either Erika Rose or Daniel Harray (credited as “Woman” and “Man,” as they also play additional side roles) suddenly emerge dressed as and performing the same role.  This coupled with the increasing similarities in the characters’ clothing hints at André’s selective inability to distinguish the strange from the familiar. Despite the shifts, the characters do not themselves change with the actors.  Consistency is not just important to André, but to the performances, as well.

David Muse’s direction is both terrifically consistent amidst all the shifts and substantive, as actors exhibit numerous subtleties in their reactions and mannerisms.  André is prone to some quirky gesture-speaking towards the beginning, which darkly foreshadows his slippage later in the show when he needs to resort to gestures to describe everyday words beyond his reach. Norris and Rose respond as Anne with nervous laughter and adjustment to her father’s dwindling capabilities, and it’s hard not to sympathize with her repressed frustration when it becomes clear André’s losing his filter.  Once he meets the new aide, Laura (Caroline Dubberly), and notes her striking resemblance to Elise, the daughter who surpassed Anne on every front, the brief scenes with all three of them together become some of the most painful.  Dubberly and van Griethuysen form an almost romantic chemistry within an instant, as she is pleasantly entertained by his peculiarities and magic tricks; but, like many moments in this dark dramedy, we laugh cautiously due to the ambiguity.  Anne is witnessing her father speaking most confidently to someone he formerly strenuously distrusted, unknowingly lying about his past occupations and forgetting himself while she can only sit by holding back a building frustration.  She describes her repressed thoughts in a one-off scene, tearfully but relievedly describing a nightmare where she strangled him in his sleep as though it actually happened.  Compare this to Pierre, who is openly antagonistic towards André, and a moral question presents itself: is it better to say nothing and act like everything’s alright, or worse to inform the suffering old man of the pain and confusion he is causing?

Vying the actors for the star billing is Debra Booth’s genius, a layered set design that absolutely sells the play’s immersion.  Immediately an audience notes a lack of identifying features in the apartment background and a bizarre clash in the decor between André’s modern leather chair and a more traditional wooden dinner table stage-left, accompanied by chairs that should fit neatly together, but never do.  The room comes to change in ways both big and small.  An abstract painting becomes a portrait, a decoration vanishes from a shelf, and warm colors leave the room and drain from another painting.  It’s a shared sense of loss.  Just as we and André get accustomed, his mind and life take it away.  A decision to incorporate strobe lights and a pulse-like rhythm into each transition is the lone technical weak point.  While interesting at first in its telegraphing misfiring neurons, it overstays its welcome as set changes become more frequent, but never distracts from the otherwise brilliant design.

“The Father” creates an immersive, heart-wrenching lucid dream become waking dream where, like André, we can revel in the mystery while praying through our nervous smiles that we may navigate its labyrinthian plot and wake up in a secure reality.  It absolutely invites multiple viewings in order to decipher its detailed development of the plot and is so wholly engaging and terrifically realized through its performances and design that each viewing is sure to leave you shaken, questioning, and yet warmed by its empathy towards yet another painful reality of human existence.

Advisory: Contains adult themes and use of strobe lights.