Theatre Review: ‘The Hunchback of Notre Dame’ at Synetic Theater 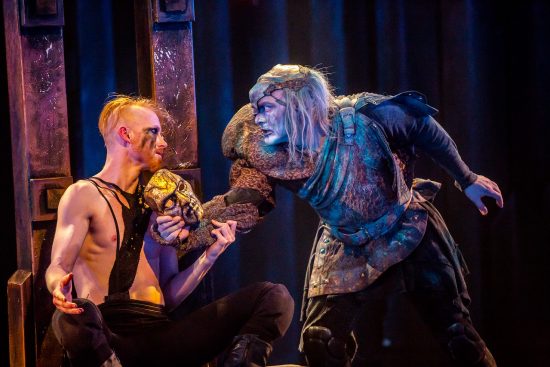 Philip Fletcher as Frollo and Vato Tsikurishvili as Quasimodo. Photo by Johnny Shryock.

The great French novelist Victor Hugo was a notorious provocateur; when he wasn’t writing plays so partisan the government banned them after one night, he was firing up the popular imagination with historical novels that revealed the extremes of the human condition.  Hugo wanted us to recognize the extremes that lurked just beneath the surface for us all, the sublime and the grotesque; and none of his novels evoked his stark vision of the human soul, in all its depravity and holiness, as “The Hunchback of Notre Dame.”

Hugo set in his novel in Medieval Paris, in and around the great gothic cathedral of Notre Dame—famous for its hideous gargoyles, fantastical beasts mainly installed along the roofline to ‘gurgle’ out the water every time it rained (hence the name).  The Hunchback of the title, Quasimodo, was adopted by the church’s Deacon, Frollo, and raised to be the church’s bell-ringer.  Quasimodo has a heart of gold, but is a bit naïve; meanwhile, a series of romantic entanglements develop, involving a ravishingly beautiful gypsy girl, Esmerelda.  She dances her way into the heart of Phoebus, a military officer.

Synetic Theater, as part of its epic theatrical mission, explores the classics of the Western canon—not just Shakespeare—and wordlessly, breathtakingly, reveals how modern they are.

The dark heart of the story centers on Deacon Frollo, who in spite of his position in the Church has become obsessed with Esmerelda.  He catches Phoebus embracing Esmerelda, murders him, and kidnaps her.  When Esmerelda refuses to accept Frollo (who, it so happens, had already been married in a gypsy ceremony to an itinerant musician, Gringoire), Frollo frames her for the murder of Phoebus, and she is set to be burned at the stake.  Quasimodo intervenes, and braving the flames rescues her and hides her in Notre Dame.

I am giving you, gentle reader, the details to the story because as spectacular as this production is, without prior knowledge of Hugo’s story you’re likely to be lost.  Make a point of coming early to read the plot synopsis provided in the program—it is essential reading and will enable you to appreciate the genius in Paata and Irina Tsikurisvili’s work here.  Paata, Tsikirishvili, Synetic’s Artistic Director, approaches Hugo’s novel as a study in madness, and one masterstroke (among many, actually) is to have a team of gargoyles symbolize Frollo’s haunted, tortured soul.  Their movements and interactions, choreographed by Irina, create just the right devilish tone.

The production is spectacular, with standout performances from all the principles:  Philip Fletcher is riveting as Frollo, whose conflicted soul is as prominent as his evil deeds.  Irina Kavsadze’s Esmerelda is charming and compelling, and Vato Tsikurishvili evokes sympathy and admiration as Quasimodo.  Robert Bowen-Smith and Lee Liebeskind, meanwhile, provide some fine comic relief as Gringoire and Clopin, the leader of Esmerelda’s band of gypsies and thieves.

As a Synetic regular, it’s hard for me to choose which design element is the most spectacular and memorable; Anastasia Rurikova Symes’ set enables the gargoyles to literally hang from the rafters, while a huge central cross is open enough to allow Esmerelda to emerge from it, during one of Frollo’s nightmares.  Brian Allard’s lights punctuate the movement and lead us inexorably through the plot as it takes its turns to the dark side.  Erik Teague’s costumes—and especially his masks—combine modernist touches (Frollo’s hip vestments, for example) with traditional Medieval garb.  Irakli Kafsadze, as always, provides a truly haunting score, pitch-perfect for the action throughout.

Synetic Theater, as part of its epic theatrical mission, explores the classics of the Western canon—not just Shakespeare—and wordlessly, breathtakingly, reveals how modern they are.  The results are not always as clear, in terms of narrative arc, as they could be; but their fountain of creativity seems inexhaustible.  See this – read up on “Hunchback” first, but by all means see this.