Theatre Review: ‘The Importance of Being Earnest’ by the City of Fairfax Theatre Company at Old Town Hall 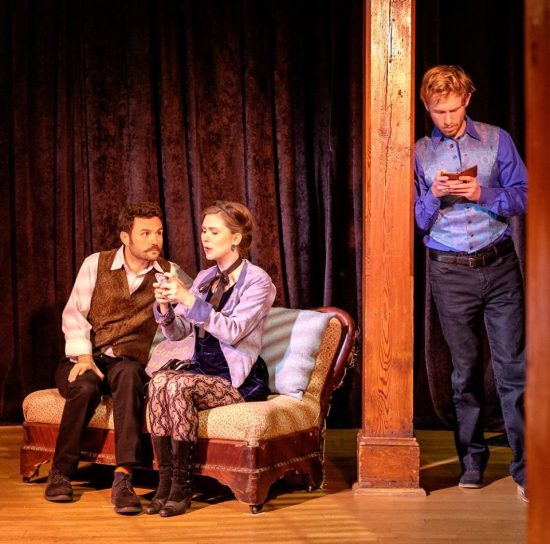 The cast of ‘The Importance of Being Earnest.’ Photo by City of Fairfax Theatre Company.

The City of Fairfax Theatre Company’s (CFTC’s) production of Oscar Wilde’s “The Importance of Being Earnest” will transport you to a world of witty, eccentric oddballs, played out in an intimate setting that might have you wondering if you’ve wandered into someone’s living room by mistake.

…a local treasure that has truly hit a home run with this fantastic production.

Jack (Eric Kennedy) and Algernon Moncrieff (Jonathan J. Ryan) both find themselves engaged to women who are unaware of the double lives they’ve been leading. Things, of course, get complicated and Jack and Algernon get creative as the story moves from London to the English countryside, providing the audience with a series of unimaginable twists and turns along the way.

Top notch performances are delivered by an ensemble of actors who so convincingly embody their individual characters, it’s hard to imagine them as real people outside the play. Kennedy and Ryan make delightful scoundrels who deliver their lines with exceptional comic timing. Michael O’Dell plays the unflappable butler, providing a hilarious counterpoint to the high emotion of Gwendolen Fairfax (Sallie Keena) who effortlessly delivers some of the play’s wittiest dialogue, and Cecily Cardew (Ashley-Rose Dickey), who plays her role with just the right combination of charm and youthful naiveté.

Director Amanda C. Herman brings out the genius of Wilde’s work in a production that makes the audience laugh while also subtly encouraging them to consider the play’s relevance to the modern day.

She accomplishes this feat by consistently challenging audience assumptions. Initially, it seems reasonable to conclude that the play is set in the Victorian era, that is, until cell phones, a laptop, and even a selfie make their way into the story. Creative costuming by Kristina Martin that melds styles and eras also serves to keep the audience guessing, making it impossible to pigeonhole the characters in any one time and place, while also lending the piece a certain timeless and universal quality. Expert lighting and set design is provided by D. Scott Graham.

I highly recommend you treat yourself to a fun and memorable evening at Old Town Hall complements of the CFTC, a local treasure that has truly hit a home run with this fantastic production.

“The Importance of Being Earnest” runs through May 7 at Old Town Hall, 3999 University Drive, Fairfax, VA 22030. For more information or to purchase tickets, click here.