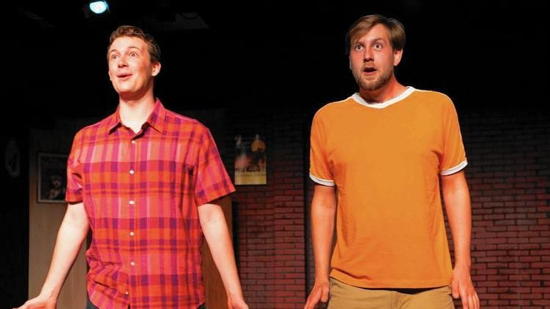 I love the theatre. I love actors. I love playwrights and directors. I love choreographers and light designers.  I love stages, audiences, and box office clerks. I love all the elements that add to what we do. And it’s this genuine love that draws forth some of the most passionate rants you’ll ever witness. As I grabbed my laptop and stared at the blinking cursor to the left of my screen I thought, what if I, a local theatrical, wrote a review about a local theatrical writing a review, in a review and named it, “Title of Review?” Confusing? So was this play, but it was entertaining nonetheless.

“[title of show]“ by Jeff Bowen and Hunter Bell, is a musical about two nobodies in New York, Jeff (Owen O’Leary) a website designer who specializes in melodic sarcasm and Hunter (Izaak Michael) a ‘Procrasturbator,’ who decide to write a musical about two guys writing a musical, inside of a musical. Hold up. Wait. If that’s the case, did they actually write a musical? But here’s the catch, they only have three weeks to get it done in time enough to submit it to a musical theatre festival before the deadline. And it’s not just them. They invite two pretty eager friends to come along for the ride, Heidi (Lauren Stuart) a working actress who’s entire career consist of background acting  and Susan (Casey Dutt) who is forced to work as an office manager to support her acting habit. Oh, and let’s not forget the underappreciated pianist (Homeretta Ayala). I guess it’s safe to say that, in actuality, it’s a musical about two nobodies in New York writing a musical about four nobodies and an underappreciated pianist in a musical, inside of a musical.

This light comedy was definitely designed for the musical theatre lovers of the world, and if you don’t frequent the theatre some of the references might fly right past you. But don’t fret, even if you aren’t a connoisseur of musical theatre and decide to check it out before it closes, you just might fall in love with this sneak peak inside of the theatre world that’s displayed in an old school, Broadway kind of way. To add to that, the voices in this production are phenomenal. Owen O’leary and Izaak Michael’s absolutely slay every one of their duets and they’ll have you humming each tune on your way to the car when you leave.  And they aren’t alone. Lauren Stuart and Casey Dutt tear down the house and takes us on the far too common journey of pointless comparison with their feud like a duet, “What Kind of Girl is She.”   All that talent paired with Tom Wyatt’s seamless choreography,  Bush Greenback’s brilliantly simplistic set that was loads of fun to watch as we traveled throughout their production journey, and the structure Director Kristen Cooley brings to a pretty complicated story, makes it a one of a kind production.

While you’ll probably find yourself waiting for the play to start, it’s something that never quite happens. It actually turns into them talking more about writing, than either of them actually writing. (Which is what most writers find themselves doing half the time anyway.) However, you really see the array of options a playwright has in the beginning of the writing process when a ‘Blank Sheet Of Paper,’ played by Hunter (Izaak Michael) sings the ballet, “Original Musical.”

As I mustered up the mental and emotional strength to watch the remainder of the play objectively, I found myself cackling and captivated by the idea of success, what that looks like for many of us in the theatre world, and the request for change that often comes along with it. The pressure we face on stage and behind the scenes is like none other. So many opinions and suggestions fly past us and it’s impossible to please everyone. And that’s okay because we don’t have to.