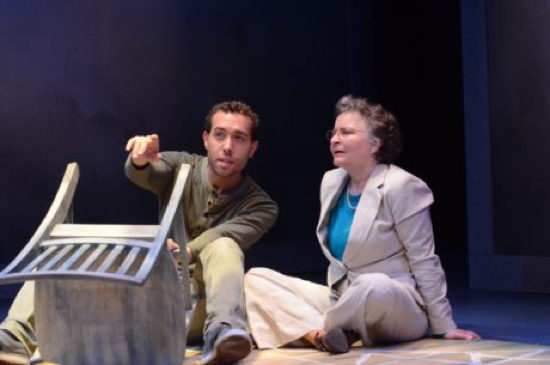 Michael Kevin Darnall as Ulysses and Sarah Marshall as Seinfeld in Ulysses on Bottles. Photo by Stan Barouh.

Fifty years after the start of the Occupation, power and privilege continue to rule the world. Instead of building relationships, we build walls, providing a false promise of security paid for by innocent lives. But what can one person do to change this reality? Will humanity ever choose to unify itself?

“Ulysses on Bottles,” the first of a series of plays presented during Mosaic Theater Company of DC’s 2017 Voices From a Changing Middle East Festival, searches for answers. While the impactful play first came to D.C. in 2013, this season’s production brings a new energy with it, as director and producer, Serge Seiden, had the chance to connect with and learn from Israeli playwright Gilad Evron before his passing last year.

The performances were stunning…

At Monday’s opening night, Ari Roth, founding artistic director at Mosaic Theater Company of DC, paid tribute to late artists, highlighted important events during this strip of land tug-of-war and described the festival’s theme, which helped prepare the audience for the intense emotional journey they were about to take.

The play focuses primarily on Isakov (Matthew Boston), a defense attorney in Israel, who represents Ulysses (Michael Kevin Darnell), a former teacher who was caught trying to smuggle Russian literature into Gaza using plastic bottles. The opening scene demands audience members jump head first into the plot as Isakov and his wife, Eden (Elizabeth Pierotti) bicker over a silly appearance at an upcoming children’s benefit. The five-person cast put on a spectacular show, highlighting how easily one can turn away from another person’s suffering. Rather than choosing to make strides towards change and away from racist ideologies, the characters demonstrate what happens when we ignore the truth.

Each of the prison scenes featuring Ulysses and Isakov showcased the multiple layers of their characters, one aspiring to bring hope to the children of Gaza, the other stuck in a negative mentality. Isakov’s constant pout was both laughable and frustrating, especially given he wasn’t the one emptying his own bucket of waste.

Sarah Marshall’s portrayal of Seinfeld, a mysterious character representative of the Israeli surveillance state, was absolutely chilling. Chris Genebach, who played Horesh, Isakov’s colleague, demonstrated the ability to finagle the law to serve one’s own agenda while stripping others of deserved justice. Finally, Eden showcased how the majority of us live, pretending all is well in the world when our children can laugh at a singing man dressed in a doll dress, all the while ignoring those whose children live in constant terror and fear. The performances were stunning, while the lines of “Ulysses on Bottles” were so elegantly translated into English that I kept jotting them down.

With a dangling lamp, one wooden chair and see-through dividers splitting the center stage diagonally, Frida Shoham’s set design was simple but easy to make sense of during scene changes. The Lego-like pieces used to represent the 250 million people living in Gaza, was a disturbing, but effective visual, especially as Seinfeld haphazardly dumped them back into a bucket “to get this cleared away.”

Roc Lee signaled the prison scenes with sounds of dripping water and echoes, which brought a haunting effect to Ulysses’ monologue. Meanwhile, Brittany Shemuga dimmed the lights just enough for the audience to see who was leaving and who was coming, which built anticipation for what would be revealed next.

Mosaic Theater Company of DC’s production of “Ulysses on Bottles” is a great wake-up call to those of us living in a bubble. It asks us to look beyond our American egos and national borders. It demands we focus less on what’s “wrong” with others and more on our own shortcomings to bring about necessary change.