Theatre Review: ‘West Side Story’ at Children’s Playhouse of Maryland 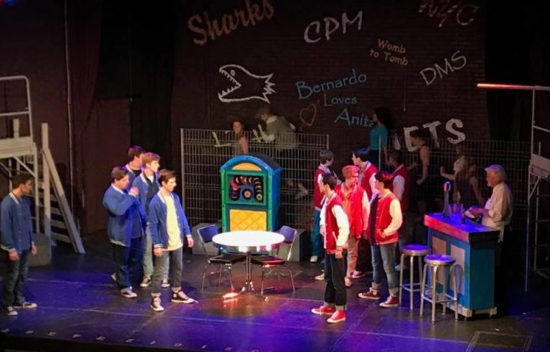 The Jets (left) and The Sharks (right). Photo provided by Children’s Playhouse of Maryland.

‘I like to be in America’ when I get the chance to see “West Side Story,” directed by Liz Boyer Hunnicutt and presented by Children’s Playhouse of Maryland. With a sweeping score and smart lyrics, amazing dance numbers, and a heart-wrenching plot, it’s clear why ‘West Side Story’ is one of the most beloved and critically-acclaimed Broadway musicals of all time.

Even though the show was first produced in 1957, its themes of race relations and romance are still relevant today.   And even if you’ve never seen the show or the movie, you’ve probably heard the gorgeous score by Leonard Bernstein and powerful lyrics by Stephen Sondheim-like “I Feel Pretty,” “America,” “Tonight,” and “Somewhere.”

The choreography is dynamic, the singing is beautiful, and the acting is on point.

Loosely based on “Romeo and Juliet,” the musical focuses on two young lovers from feuding ‘families.’ The Jets and the Sharks are two rival street gangs attempting to maintain their turf in New York City. While the Jets are comprised of white, American-born teens, the Sharks are Puerto Rican. Riff (Josh Robinson), the leader of the Jets, challenges Bernardo (Kevin Franiak), the leader of the Sharks, to a rumble at a neighborhood dance. Meanwhile, Tony (Emilio Bayarena), a former member of the Jets, meets Maria (Ilyssa Rubin), Bernardo’s sister, at the same dance. It’s love at first sight, and the two are absolutely smitten with each other. But what happens when love is completely forbidden?

The musical stays true to the original story. In the first scene, the Jets are instantly identifiable in their blue jackets (thanks to Costume Coordinator, Sharon Byrd) while the Sharks come out wearing the same jackets in red. The dance steps in the ‘Prologue’ are complicated, but the Jets and the Sharks make it all look effortless. To add to the complication, the gang members mix their dance steps with fighting moves, throwing punches while staying on beat. Their coordination and dancing skills are beyond impressive.

The fantastic dance numbers continue when the gangs meet to mambo. The dance is incredibly high-energy and a kaleidoscope of colors and movement.

“West Side Story” requires the cast to not only be strong dancer but excellent singers as well. And Rubin and Bayarena do not disappoint. In Bayarena’s first song, “Something’s Coming,’”he’s incredibly smooth and has excellent timing. He conveys that he’s a hopeful dreamer and does a great job reaching all those high notes.

We’re introduced to Maria at the bridal shop, where she works with Bernardo’s girlfriend, Anita (Rachel Miller). Rubin is a beautiful, sweet, young and naïve Maria, giggly as she tells Anita that she wants her dress to be shorter. She has an authentic-sounding Puerto Rican accent and easily adjusts to Spanglish.

When Tony and Maria meet at the dance, you can instantly feel their bond. Even amid the large group of dancers, it seems as if it’s only the two of them, alone in the room (thanks in part to Lighting Designer Diane M. Smith, who works the spotlight). From the dance, there is a seamless transition into Tony’s song “Maria.” In fact, even with all the songs and dancing, the complicated rhythms and high notes, the show seems seamless and effortless.

Miller is a sexy, confident Anita who sees herself as an advisor to young Maria. She shows her strong attitude toward America during the song of the same name, demonstrating how happy she is that she left Puerto Rico. In a bright red dress, she is fierce and expressive.

“West Side Story” has a little bit of everything. Parts of the show are moving and tender, such as when Maria and Tony sing “One Hand, One Heart” after their (pretend) nuptials. Other parts of the show are violent and scary, such as the scene when the gangs sing “Tonight.” The gang fight with knives is incredibly realistic. And then there’s the comedic relief when the Jets sing and dance to “Gee, Officer Krupke,” making fun of the fact that they might have a ‘social disease.’

There’s a place for you somewhere at CPM’s production of “West Side Story.” The choreography is dynamic, the singing is beautiful, and the acting is on point. Plus, the cast makes numbers like “Cool,” “America,” and “I Feel Pretty” extraordinary. “West Side Story” succeeds in getting everything right – its lessons and messaging its emotionally powerful story, and its beautiful musicality.

“West Side Story” plays through May 21, 2017, at the Children’s Playhouse of Maryland in the Lecture Hall of the Administration Building at the Community College of Baltimore County Essex Campus, 7201 Rossville Boulevard in Baltimore, MD. For tickets call the box office at (443) 840-2426 or purchase them online.