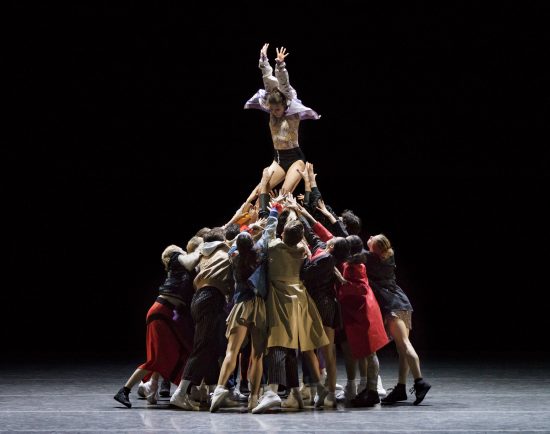 “Ballet is a classically based art form, so it comes with a certain set of rules, at least to start with, then it’s about how far you want to push from there.” This quote, from Justin Peck, represents the impressively presented program that the New York City Ballet brought to the historic Kennedy Center Opera House this past Friday night. From a modern take on a Gershwin classic to a stunning feat of contemporary ballet, it was a virtuoso performance that was not to be missed.

For this visit to Washington, the New York City Ballet decided to focus on three prolific choreographers from both the ballet’s past and present. There was a performance choreographed by Alexei Ratmansky also, but that piece was not performed on Friday night. There was vibrant work by long-time NYCB collaborator Christopher Wheeldon, a dance journey into the human psyche choreographed by NYCB co-founder George Balanchine and a frenetic finale by ballet wunderkind Justin Peck.

New York City Ballet continues to be an example to the ballet world of the width and breadth ballet can espouse.

First up was Wheeldon’s contribution, hot off of his Broadway success as the director and choreographer of 2015s “An American in Paris.” This ballet was also set to Gershwin music, this time to the unmistakable “Rhapsody in Blue.” What emerges is a sort of “Midsummer Night’s Dream” style love story, with two couples as the ballet’s central focus. As in Shakespeare’s work, there are two lovers, each of whom has other admirers. There are a series of pas de deux and pas de tois, until there is a beautiful and comic moment when the two others meet and suddenly their other infatuations are forgotten.

Ballet is infused with more avant-garde jazz movements, with a plethora of impressive lifts and tableaus. The other aspects of the performance only enhanced the aesthetic; the costumes were all in a 1920’s style, and all in shades of blue with some bright orange accents. The corps de ballet turned in a stunning performance; impressing with the uniformity of their movements, especially with the challenge of a jazzy score. The lighting was also tinged with blue, reflecting the central theme and the background was an abstract explosion of blues and orange. When the two lovers find each other, the colors change from blues to purple, denoting the shift in feeling, and the orchestra, led by Gershwin expert and music director of the NYCB, Andrew Litton, helped the audience navigate the story with their deft and masterful use of differing levels of volume. The four leads (Lauren Vovette, Russell Janzen, Unity Phelan and Taylor Stanley) danced with passion and joy, hitting all the right notes. The piece was beautiful and full of emotion; an impressive addition to a well-established classic of the jazz age.

To fully appreciate the next ballet, you need to have a basic knowledge of the medical theory of the four temperaments or humors, first developed by Hippocrates. It is the idea that there are 4 kinds of fluids in the body that cause the different moods. These four humors are Sanguine (bright and exuberant), Choleric (frenetic and aggravated), Melancholic (contemplative and thoughtful) and Phlegmatic (serene and relaxed). The idea is that too much of one or an imbalance caused the bad behavior of humans. This ballet reflects the essence of each, in turn, bringing them together at the end as they were perceived interacting in the body. This ballet was choreographed by NYCB co-founder and legend George Balanchine.

The dancers did a fantastic job representing their humor, allowing the audience to understand what each consisted of, even if they didn’t have the background knowledge from above. It was also helpful that the background and costumes were kept extremely plain, as not to distract from the higher concept. Gonzalo Garcia represented “Melancholic” with fluidity and was accompanied by a beautiful violin solo. The next variation matched its humor, “Sanguinic,” perfectly it was much brighter and more buoyant. The choreography featured a large number of lifts and the music moved at a rapid pace. Jared Angle and Sara Mearns made the dance look effortless, which is an achievement for this intricate ballet. The Phlegmatic section was led by an impressive performance by Ask la Cour, his body twisting and turning. Finally, “Choleric” concluded the dance, led by Teresa Reichlen. The finale had all of the dancers from all four temperaments dancing together, with the principle dancers taking turns in the spotlight; highlighting the idea that the humors are in constant flux within the body. It was a fascinating artistic representation of a psychological idea.

The program concluded with Justin Peck’s contribution, “The Times Are Racing.” Our performance was doubly lucky that we got to see Peck dance in his ballet. Undoubtedly the most contemporary of the pieces, it seemed more like the future of ballet than the present. The music consists of the last four tracks of tracks of Dan Deacon’s 2012 album “America.” The music was loud, brash and frenetic. The circular formations and almost violent movements hearken a yearning for connection and understanding. There was also an integration of other dance styles such as tap, hip-hop and break-dancing, blending easily with the ballet. I was most impressed by the dancer’s perfect synchronicity with the rapid movements and shifting styles.

The dancers made a statement with their movements, but also with their costumes. The costumes were very contemporary and were a result of Peck’s second collaboration with fashion designer Humberto Leon. The clothing literately spoke, with pieces being emblazoned with words like “Defy,” “Change” and “Fight.” It was representational of they youth of today; diverse and proud. The dancing was defiantly youthful and expressive yet controlled. Watching it was an invigorating experience, both because of the pure energy expelled from the stage and the feeling of watching a paradigm shift within an art form.

The program was highly diverse and quite representational of ballet today. While there is value in classics and the history, ballet is also absolutely moving forward and experimenting with the possibilities that are still developing. New York City Ballet continues to be an example to the ballet world of the width and breadth ballet can espouse.