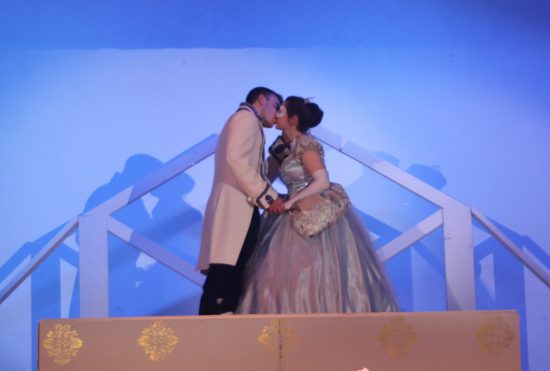 Krystian Ochman and Emily Ray. The photo is by Maria Samper, a student at Thomas Wootton HS.

It’s the classic tale everyone knows by heart: a beautiful girl, ridiculed and mistreated by her own stepmother, is visited by a protective fairy godmother who helps her achieve her dreams of escaping her old life and falling in love with the charming prince who rules the land. In some ways, it’s easy to dismiss these well-known narratives because of their predictability and sameness; in another way, it can be quite charming to see a unsurprising tale spun in a way that takes the audience off guard with its whimsy and colorful vivacity. “Cinderella,” put on by Wootton High School’s Center for the Arts, falls firmly into the latter category.

The show’s narrative, taken largely but not entirely from Rodgers and Hammerstein’s popular 1957 television broadcast, adds a few more songs and changes the disposition of a few characters. In a bit of a twist from the story with which most are familiar, this show also includes a political revolution and a stepsister sympathetic to Cinderella’s desires.

Led beautifully by Emily Ray and Krystian Ochman (playing Ella and Prince Topher, respectively),  the show’s cast crackled with believable chemistry. Every moment that the two shared on stage commanded the attention of the entire audience, and their voices and body language convinced everyone that they were truly watching a couple fall in love. This was especially apparent during instances where the pair sang together, such as their breathtaking and powerful duet in “Loneliness of Evening.” All the songs were made even better by the astounding vocal prowess of both leads, which together made it quite easy to forget that this was a high school production.

In supporting roles, Daria Kerschenbaum portrayed a delightfully sinister antagonist, characterizing the greedy stepmother with a reverberating evil laugh and movements consistent with a haughty, high-class woman. Local revolutionary Jean-Michel (William Memmott) and stepsister Gabrielle (Taylor Litofsky) sang with power and purpose, but maybe more impressively created a couple that can only be described as adorable.

Behind the scenes, Wootton’s incredible pit orchestra found a way to carve out a distinct and impressive identity as the night wore on and the pieces proved to be progressively complex. And the sets, too, stood out: the castle location, specifically, was a gargantuan and imposing seven-piece set that found a way to express the might of the monarchy and portray everything from a throne room to a ballroom.

Unfortunately, a few minor technical difficulties marred an otherwise smooth and engaging show. Articulation issues, especially near the beginning, and fuzzy microphones made some lines difficult to hear. But they were small distractions in the middle of a show that otherwise was able to transport the audience, if only for one night, to a faraway kingdom filled with romance and childlike wonder.